The Alternative Factors – IDW’s Star Trek comics by the numbers

Every month, Diamond Comic Distributors release the sale figures for the top 300 comic books they sell via the Direct Market, which are then conveniently posted for your reading pleasure on John Jackson Miller’s Comics Chronicles, a website devoted to aiding comics research. I decided that it would be interesting to specifically analyse the sales patterns of IDW’s Star Trek comic books, and see if I could notice any trends or points of interest in the data. I’ve been keeping a log of this data for myself for a couple years now, and this report highlights what I’ve turned up thus far.

First off, we have the raw sales data: the reported issues sold for every Star Trek comic IDW has released since The Space Between #1 in January 2007 up until April 2010, which saw the release of Movie Adaptation #3 and Leonard McCoy, Frontier Doctor #1. IDW tends to do all of its Star Trek work in miniseries; two one-shots are omitted from this chart: the Klingon-language variant of Klingons: Blood Will Tell #1 (3,874 copies, April 2007) and Focus on… Star Trek (4,958 copies, July 2007). (Indeed, I’ve not used the two one-shots in most of my computations since they’re completely unlike any other IDW release.) I’ve colour-coded the years of release here: pink for 2007, orange for 2008, yellow for 2009, and green for 2010. 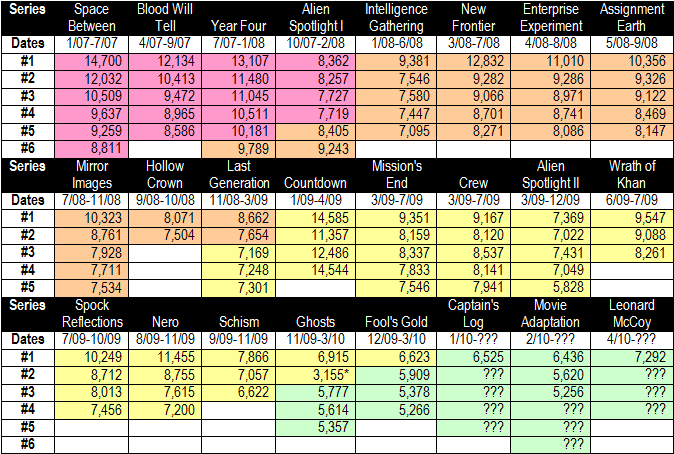 * Ghosts #2 was released at the tail end of December 2009, and its sales straddled that month and January 2010. Unfortunately, it was unable to make the Top 300 for December (meaning it sold fewer than 2,900 copies), so we only have its January 2010 sales to go on. It will be discounted from all calculations as a result.

The average issue of an IDW Star Trek comic sells 8,630 copies. The best-selling issue remains the one that kicked it all off, The Space Between #1, with over 14,000 copies sold. The closest IDW has come to repeating that is with Countdown #1, which was able to ride the hype of the 2009 film. That hype must have been short-lived, however, because their worst-selling issue is April 2010’s Movie Adaptation #3. (Weirdly, it’s selling worse than last year’s adaptation of Star Trek II: The Wrath of Khan, a film now over 25 years old! At the time I wondered how that move even made business sense… apparently it made a lot.)

Looking at the data by larger periods of half a year can also be informative, letting us see how the line fairs over time. I’ve omitted 2010 from this chart, since only a quarter of it has data that we can use.

* This includes the 3,155 copies of Ghosts #2 reported, so the actual number should be somewhat higher. The 3,155 figure was not used in computing the average or median for late 2009.

As you can see, the total number of issues sold by IDW has steadily risen over time, as more and more miniseries have been in production simultaneously. This reached a peak in early 2009, again no doubt thanks to the hype surrounding the new film. (Early 2009 certainly has the highest volume, with a lot of miniseries coming all at once; in March, for example, The Last Generation #5, Countdown #3, Mission’s End #1, Crew #1, and Alien Spotlight II #1 were all released.) On the other hand, the number of copies sold of the average issue has steadily declined since IDW launched its Star Trek line, with the exception of early 2009 once again. The median, which is cushioned from high-selling outliers like Countdown, has remained much more steady in its decline.

To get a feeling for the line as a whole, we can also look at the average number of copies sold of each issue in a (completed) miniseries over time: 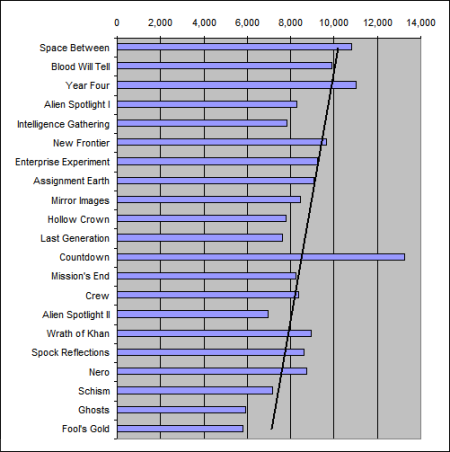 What’s interesting about this is that not only is there a pretty steady decline, with the recently-completed Ghosts and Fool’s Gold being the only series to drop below 6,000 copies of each issue sold, but also that Countdown is a pretty significant outlier, being the best-selling miniseries thus far by a large margin. But it also shows us that though other film tie-ins such as Spock: Reflections and Nero had high sales on their first issues, subsequent issues saw enough of a drop-off in sales that they don’t really stand out from contemporary miniseries.

Here the different miniseries are sorted by average issues sold (and coloured by year as above): 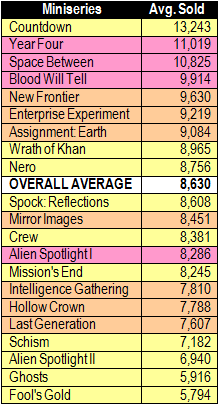 Another interest factoid is how well different series sell. IDW initially only took out a license for classic Star Trek and The Next Generation because it was thought that the later series did not sell well enough; they later added Deep Space Nine and have so far produced one miniseries. There are also the various new film tie-ins, and John Byrne pretty much seems to work in his own corner of the Star Trek universe. How do all of these different types of Star Trek sell?

From this chart, you’d think that IDW should keep pumping out New Frontier miniseries all the time, but that miniseries ran at a point when almost everything was selling that well. Byrne’s work acquits itself fairly well when you consider that he hasn’t had any big sellers like The Space Between, Year Four, or Countdown to boost his numbers. Deep Space Nine is last by a wide margin, but there’s only been one DS9 miniseries so far, and it sold only marginally worse than its contemporary The Next Generation release.

IDW tends to use repeat creators a fair amount, so the question of which creators sell the best is worthwhile – if you indeed believe that that’s a factor, as tie-in books are often driven much more by the series they are a part of than reader loyalty to particular authors. I’ve averaged how many copies of each issue’s different creators (or creative teams) have sold. (I’ve omitted any creator who hasn’t worked on at least three issues for IDW.) 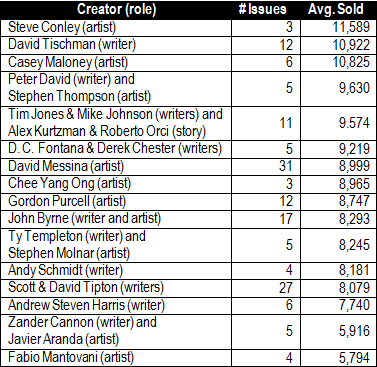 I think the flaws in this approach are immediately obvious – David Tischman and Steve Conley would write and draw every story, whereas Scott and David Tipton would never work for IDW ever again – but it’s still interesting to look at. Obviously the creator who’s contributed the most to IDW over the past three years is David Messina, who has illustrated all the issues of Blood Will Tell, Intelligence Gathering, Mirror Images, Countdown, Spock: Reflections, Nero, and Movie Adaptation.

Obviously the first issues of comic book series are blind buys, unless you’re one of those people who reads the thing in the shop before picking it up. Because of that, I think the percentage of people who pick up the first issue of a series who still pick up the last one is an interesting point of comparison. A series with low but steady sales shows you that everyone who buys it keeps on buying it. (I’ve omitted any miniseries with three or fewer issues from this chart, which is essentially John Byrne’s two Romulan miniseries as well as The Wrath of Khan.) 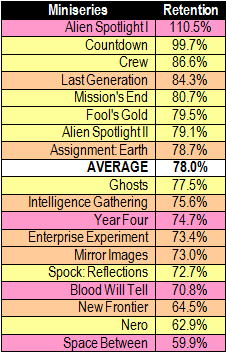 The clear winner here is the first Alien Spotlight series, where 8,362 copies of issue one (The Gorn) were sold, compared to 9,243 copies of issue six (Romulans). In fact, Alien Spotlight #6 is the third-best numerical showing for the last issue of any miniseries; only Year Four #6 and Countdown #4 sold any better. It’s tempting to blame this on the John Byrne effect, but even if issue five (Borg) had been the last issue, we would have seen a retention of 100.5%. Both of John Byrne’s miniseries are above average, with Crew doing especially well. (If you counted The Hollow Crown and Schism as one long Romulans miniseries, it would have had a retention of 82.0%, placing it fifth on this chart.)

Countdown has an astounding retention, even moreso when you consider that the better a series sells, the lower its retention seems to be, and it surprises me since the trade paperback of the miniseries was available before issue four, which surely negated some of the need to buy it. On the other hand, despite not selling very well, Fool’s Gold is a bit above average, evidence that those who bought it stuck with it. (I guess Deep Space Nine fans are a dedicated bunch.) Alien Spotlight II would come in third with 95.7% if it had ended after issue four; the big drop-off came between issues four and five, and it’s tempting to blame that on the weird four-month gap between those issues. (There was also a three-month gap between issues three and four with a much smaller drop-off, however.)

Unfortunately for IDW, their other film tie-in miniseries have not faired so well, with Spock: Reflections and Nero down near the bottom of the list. Time remains to see how Movie Adaptation will do. Most of the miniseries with low retention rates are the ones that came near the beginning of IDW’s license, which had really high orders on issue one; Blood Will Tell, New Frontier, and The Space Between all drop pretty sharply.

Since picking up the Star Trek license, IDW has sold over 880,000 comics through the Direct Market, amounting to some 22,000 copies moved per month (at the very least). While this doesn’t place IDW among the juggernauts of the comic industry it seems fairly respectable; the company moves around 16,000 Doctor Who comics per month, for example. It is somewhat worrying, however, that despite continuously restarting its numbering with new miniseries and despite the boost from the new film, each progressive miniseries seems to do a tiny bit worse than the one before it, with the two latest completed miniseries being the first to drop below 6,000 copies sold. We can speculate as to the reasons – a loss of the initial reader enthusiasm, the overall drop in comics sales thanks to the recession – but ultimately all we can hope for is that IDW continues to try to publish top-quality Star Trek stories.