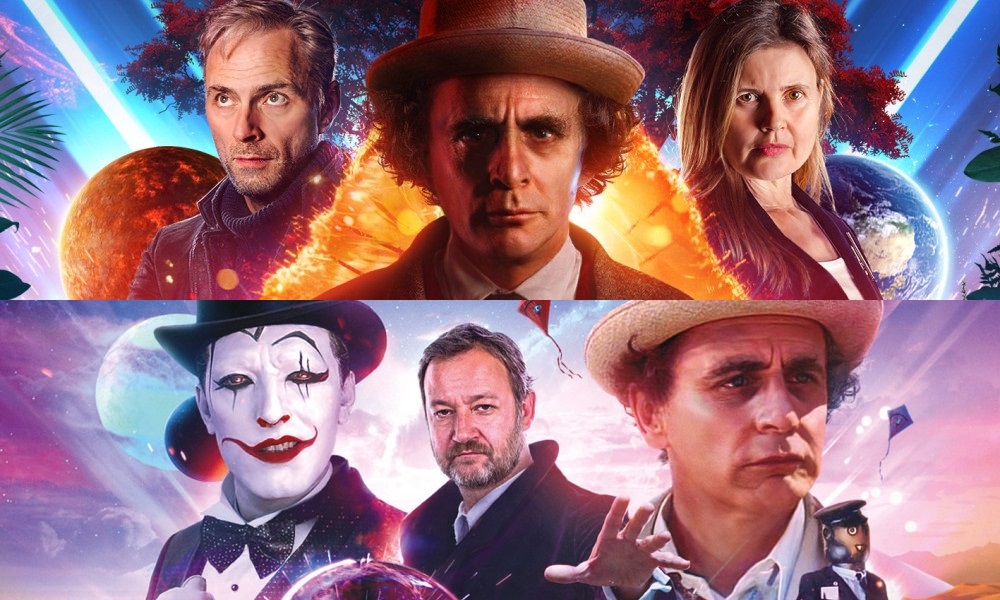 Big Finish’s Doctor Who “main range” — its collection of two-disc stories going back to 1999 — is finally coming to an end. It’s a weird thought. The whole way I got into Big Finish was typing “doctorwho.co.uk” on a whim back in 2001 and then buying Storm Warning to see what it was all about. I used to only pick up the Paul McGann ones, but fortieth anniversary hype saw me take out my first subscription in 2003, and I’ve listened to more of them than I haven’t over the past 19 years. But if you follow my reviews, you’ll know that these days, I dislike more of them than I enjoy. Somewhere along the line, a rut or a rot set in, even if there are occasional flashes of something better.

Somewhere along the line, a rut or a rot set in to Big Finish’s Doctor Who “main range”

In one sense, Dark Universe and The Psychic Circus — the first two parts of the most recent Seventh Doctor trilogy — are utterly typical late period main range stories. In a range that has sometimes felt too dependent on bottom-circling nostalgic callbacks, we have two of them in a row: one story is a prequel to the Eighth Doctor’s Doom Coalition and a tie-in to a promotional trailer for a DVD release; the other is a prequel to the television story The Greatest Show in the Galaxy but also features the Master.

But they’re also quite different. Dark Universe is Big Finish at its most banal. Scriptwriter Guy Adams says on the extras he wanted to do the Big Finish version of one of those giant comic book crossovers, but there are at least three problems with such a statement. One, Big Finish already do this kind of storytelling already in their box sets; this feels exactly like the same kind of the-whole-universe-is-at-stake-and-the-Time-Lords-are-involved thing we get all the time these days, in Doom Coalition, Dark Eyes, Ravenous, The Eighth Doctor: Time War, and The War Master, among other ranges I’ve probably forgotten. This style of storytelling is nothing new — and Adams himself has written several of those stories himself!

Two, the two-disc main-range format isn’t very suited to it. I’ve complained about the overreliance of the Eighth Doctor box sets on recurring characters (the 16 episodes of Ravenous, for example, brought back Winston Churchill, the Eleven, the Kandyman, the Voc robots, River Song, Charley Pollard, Bliss, Jamie, Jo, Leela, Romana, Adric, Katarina, the Nine, and four different incarnations of the Master), but they do give the whole thing a certain sense of scale. A single two-disc release can’t afford to do that — so this universe-shattering epic has exactly four named characters who aren’t the Seventh Doctor and Ace, and one of them is the discount Ollistra played by Carolyn Pickles, and one is Rasmus, possibly the least interesting recurring character Big Finish have come up with since Veklin. This doesn’t really mimic, say, Infinite Crisis, in any meaningful way. Imagine if a giant DC crossover featured Superman and Batman… but then only the Red Bee and Damage. Why even do it?

Dark Universe is Big Finish at its most banal

Three, most of those giant comic book crossover stories are terrible. They are lots of noise, but nonsensically plotted and the characters are usually just blurbs. Guess what? Dark Universe is terrible too. It seems like there’s a good character hook in the appearance of a decades-older Ace, but this thread alternates between unused and poorly used. As The Sarah Jane Adventures intimated, Ace is now the CEO of A Charitable Earth… but how did she leave the Doctor? We have no idea. Why does she resent him? Not really clear. Yes, he can be manipulative… but he’s been that way all along, and in some pretty big ways. If Ace finally reached a breaking point, we need to experience that as listeners. Instead, the chronologically most recent Ace adventure before this is An Alien Werewolf in London, where Ace is hanging out in 1990s London for unclear reasons but seems to be on perfectly good terms with the Doctor. But it doesn’t even really matter, because for most of this story, Ace is written and played as her usual 1980s self. It’s hard to believe that a woman decades older would react to the taunts of the Eleven the way Ace does here.

On top of that, the story is almost nonexistent. Two episodes are spent with Ace and the Eleven meandering on a quest, but nothing ever feels like it’s at risk. Compare this to the strong scenes of Liv and the Eleven in The Eleven in Doom Coalition 1, and there’s no suspense here. The Eleven comes across as less a dangerous murderer and more a guy who just says mean things a lot. (Partially this is down to Mark Bonnar’s performance, which seems to have gotten more hysterical with time; a bit from The Eleven is recapped here, and his performance has definitely changed for the worse since then, so that the join is obvious.) Then Parts Three and Four do a very boring gimmick. Even if Big Finish hadn’t recently done the same gimmick in a War Master box set, it makes the way the story is going to go incredibly obvious. Everything plays out exactly as you imagine.

It’s just boring to be honest. I’m tired of the Eleven, who was overused in Ravenous. There’s some merit to a prequel explaining his capture, but I don’t think the Eleven works well in take-over-the-universe plots that just as easily could be written for the Master. A one-on-one dangerous criminal story would have been much more interesting. I find long scenes of cryptic aliens talking in a processed voice utterly dull. I’m tired of Time Lord epics. The drama created by having someone say big chunks of the universe have been eliminated is utterly hollow — if you don’t feel it as a listener, what’s the point? When it’s not boring, it’s bad, like the one-dimensional South American natives, or the character assassination of the Seventh Doctor in the final episode. I don’t see why this was made, to be honest, and given it was made, I don’t see why it was made so poorly.

One might think that The Psychic Circus — the next month’s Seventh Doctor prequel story with a gratuitous extra Time Lord — was seemingly unnecessary. But instead, it’s oddly captivating and unusual. Stephen Wyatt returns to Doctor Who for the first time since the 1980s to write a prequel to his classic, The Greatest Show in the Galaxy. I never thought this was a story that needed a prequel, and indeed, the details of Psychic Circus don’t quite line up with the implications of the original.

The Psychic Circus is oddly captivating and unusual

But despite that, I found this an engrossing and interesting story. Partially, that’s because although it’s a prequel, it doesn’t go the way you expect. There’s a weird curveball in Part Two that totally defied my expectations. Even better is the Part One cliffhanger, surely one of Big Finish’s most off-kilter and yet brilliant moments.

The talents of Wyatt and the cast ensure that this is always interesting listening. The story of Kingpin and Juniper Berry is downright tragic, the story of how the Circus itself is slowly undermined by its own ambitions and success all too real. Ian Reddington — who was deliciously creepy as the Chief Clown on screen, but mostly through a non-vocal performance — reinvents the character on audio marvellously, equalling his performance as the Word Lord in A Death in the Family. I even liked the performance of James Dreyfus as the Master; I found his incarnation pretty pointless in The Destination Wars, but his role here oozes with menace in a very classic Master way.

Like I said, it’s an odd story: the Doctor is almost irrelevant to it, and it has to slightly convolute to fit in with Greatest Show. But it’s always interesting and sometimes captivating. (Except for the sequence where an “American” circus fan turns up; that was wretched.)

Oddly, it’s also seemingly a criticism of Dark Universe itself. The moral of The Psychic Circus is that if an artistic endeavour runs too long and puts selling copies over creativity, it dooms itself to becoming stagnant and soulless, performing increasingly empty routines to an audience supposedly increasingly hungry for novelty but not actually wanting anything new. I wouldn’t have thought we’d get a pair of Big Finish stories where one essentially tells you not to buy the other, but do you know what… I agree. Hopefully the main range coming to an end means it won’t be trapped in a decline as long as that of the Psychic Circus. It used to be the Greatest Show in the Galaxy, after all, but these days…