Doctor Who: No Place / One Mile Down / The Creeping Death review 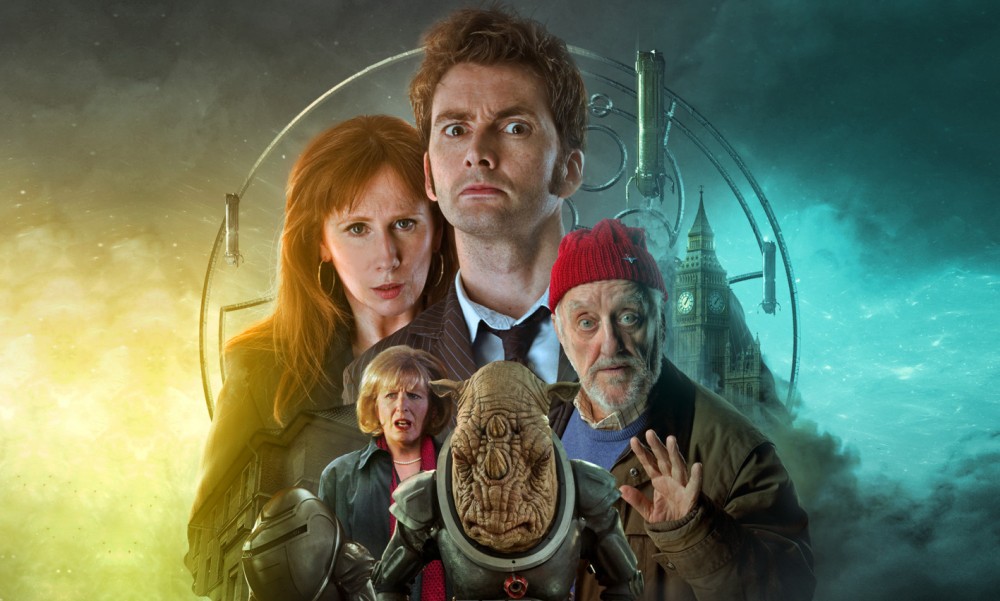 Volume Three of Big Finish’s Tenth Doctor Adventures yields three more adventures for the Tenth Doctor and Donna Noble, once again with a contemporary opener, a historical, and a futuristic story. As much as any other range, this one is establishing its own identity despite its very slow rate of release, and seems to become more enjoyable with each iteration.

David Tennant and Catherine Tate really get to do their thing, and what a thing it is

James Goss kicks off the most recent set with No Place, which doesn’t just include the Doctor and Donna, but the whole Noble family, as Jacqueline King and Bernard Cribbins are back as Sylvia and Wilf. The foursome are remodelling a haunted house for a reality television programme, Haunted Makeovers, where the host advises on countertops and acts sceptical about poltergeists. It’s done in the format of an episode of the show — everything we hear is ostensibly footage recorded by Justin, the programme’s host, or his crew.

It’s a good gimmick, with some good moments. Of course the Doctor and Donna pretending to be married is fun, but the best scene comes when Wilf builds a fire and uses it to explain to Justin who the Doctor is; it felt like it could have come straight out of Series Four on screen. On the other hand, the shape of the story as a whole doesn’t quite work. A good horror story should slowly escalate tension (We Always Get Out Alive does this beautifully), but in this one it feels like a spooky thing happens, then the tension resets, then another one happens. There’s no sense anything’s building, that earlier happenings lead to later ones. Most oddly there’s a whole scene about Justin bravely spending the night in the attic, which goes right up to him doing it. It’s a good scene, especially for Wilf, but then the story just jumps ahead to the next day, without actually having him do it, or even telling us what happened! (Presumably nothing, but that seems worth noting.)

Jenny Colgan’s One Mile Down is more successful. Like her story in Volume One, this feels like something Series Four would have actually done on screen, except they couldn’t have afforded to do it on screen. Donna talks the Doctor into going to an underwater temple that he’s been to before — except since his last visit it’s become a tourist trap, drained of all its cultural significance. And the Judoon are on hand in case anyone tries to damage the artefacts…

The story is a great one for the Doctor and Donna — Colgan nails their voices, both individually and together. While the Doctor discovers no-one in authority wants to hear from him, Donna must contend with the fact that she keeps running into the same small-minded xenophobe in every queue. The plot is pretty straightforward, but it’s a delight to listen to. Colgan doesn’t just have a knack for the characters, she also manages (with the aid of sound designer Howard Carter) to visually evoke the Russell T Davies era. There’s a bit with Donna and friends on top of a spire over the domed underwater city that I could totally see in my head — and totally imagine the TV show attempting. Colgan does a great job evoking the humanist, optimistic ethos of the Davies era. Plus Nicholas Briggs’s baby Judoon has to be heard to be believed — and to be loved.

Most successful of all is Roy Gill’s The Creeping Death. Title aside, this historical is a great Series Four pastiche, in the best possible way. In 1952, the Doctor and Donna help a group of characters navigate the Great Smog, a real historical event that killed 4,000 — but in Doctor Who-land had aliens along for the ride. If you like those Russell T Davies stories where the Doctor helps a group of ordinary folk navigate a dire situation, then this is the story for you.

Most successful of all is The Creeping Death — funny, inventive, clever, and character-driven

It’s funny, inventive, clever, and character-driven. The strong focus on character keeps it from being mere pastiche. Some of the characters are caricatures, but fun ones: Stephen Critchlow’s aging vacuum salesman delights, and Helen Goldwyn’s uptight actress gives Catherine Tate someone to lay into. But the heart of the story is a trio of young people: Lauren Cornelius’s Ivy, Theo Stevenson’s Terry, and Kieran Bew’s Richard. Terry and Richard charm, and present an optimistic take on something Big Finish often don’t bother to do, and Ivy feels like one of those should-have-been-a-companion characters Russell liked to taunt us with. I hope Big Finish give us more of Lauren Cornelius!

With three stories that range from good to great, David Tennant and Catherine Tate really get to do their thing, and what a thing it is. It’s weird to think they’ve been gone from our screens for more than a decade, but with Big Finish, you can always go home again. If you want to hear 2008 all over again, here it is.

(There are two whole CDs of extras. Of course this is completely unnecessary. The first is the usual Big Finish thing, with all its strengths and weaknesses. The bits where Tennant and Tate are interviewed together are utterly charming. On the other hand, David Richardson and Ken Bentley talk about how nice it is to get a script from Roy Gill that’s character-driven and “proper drama” because it plays to the strengths of audio, and I’m yelling at the radio, “You are the people who commission the scripts! You can always do this! You don’t have to wait for a Russell T Davies pastiche to remember how to characterise guest characters!”

But then there’s a fifth disc called David Tennant at Big Finish, billed as a documentary, but actually a bunch of interviews strung together from Doctor Who Unbound: Exile, Dalek Empire III, and Volumes One and Two of The Tenth Doctor Adventures, with clips from those releases as well as Colditz, Unbound: Sympathy for the Devil, and Medicinal Purposes. I don’t know who it’s for. If it’s for a new Big Finish listener, there’s almost no context. What is Exile? No-one ever explains. Plus, the clips played in from Exile are awful. Like, some of the worst “comedy” or worst Big Finish you’ve ever heard, full stop. And the stuff from Colditz is full of amateurish sound design. I cannot imagine anyone listening to this and wanting to pick any of the pre-Tenth Doctor material up; it does nothing to help sell it. It’s like someone spent five minutes pasting together some pre-existing interview clips and called it a day. All the good bits are on the extras for Volume One already. Avoid avoid avoid.)