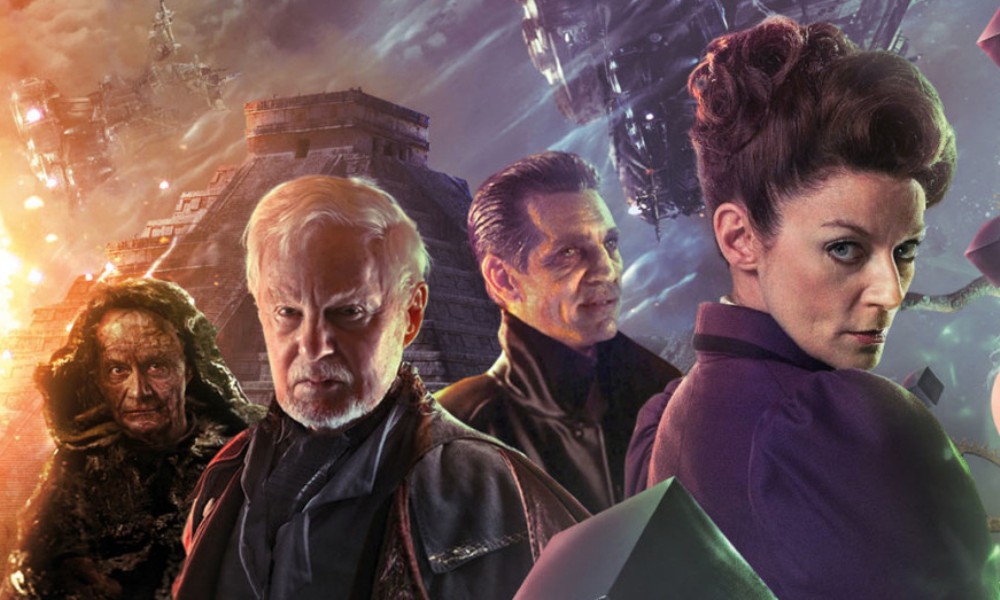 The Diary of River Song began with River meeting the Eighth Doctor, then continued with the Seventh, and so on — but now River has met all the classic series Doctors who work with Big Finish. So, for Series Five, a new approach has been taken: it turns out that River’s timeline is also tangled up with that of the Doctor’s archnemesis, the Master. Its four episodes feature four encounters with four different incarnations of the Master: Michelle Gomez’s Missy, Geoffrey Beevers’s corpse-like Master, Derek Jacobi’s War Master, and, appearing for the first time anywhere in 23 years, Eric Roberts’s “Bruce”.

This is an enjoyable, entertaining set

The result almost never fails to entertain. The best story is the first one, Jonathan Morris’s The Bekdel Test. River is locked up in an escape-proof prison, and soon she has met one of her fellow inmates: Missy. Morris’s script is clever, coming up with a compelling reason for both characters to be imprisoned together, and to work together. It also sparkles — Morris is always good at pastiche, and with River and Missy in the same room, the script manages to do Steven Moffat’s dialogue at its most outrageous. The best scene is definitely when River winds Missy up by mistaking her for the Rani, but this story just flies by. Alex Kingston and Michelle Gomez are both wonders, and this script could just get by on the two of them trading barbs, and they are so fun to listen to it was almost a disappointment for me when I went from The Bekdel Test to the first episode of Missy Series One and it was just Missy by herself. But the script doesn’t rest on its laurels, with a lot of other fun and interesting concepts.

The second story, Animal Instinct, also entertains. While Morris’s script emphasises the compatibility of Missy and River, Roy Gill’s emphasises the disjunction between its protagonists. River and Beevers’s Master come from different styles of stories — hers a fast, flip world, his a world of complex, slow plots. Once can sense that each character is frustrated by the other. I love Beevers, but Big Finish often use him in mediocre Fourth Doctor Adventures that waste his talents — nothing like that here, as without the Doctor around, the Master gets to demonstrate the full extent of his savagery and ruthlessness. On the other hand, it’s delightful to hear how flustered he gets when River reveals her identity. The supporting characters are kind of dull, but let’s be honest, they’re not why we’re here.

I wanted to like The Lifeboat and the Deathboat more than I did. I actually do legitimately love Eric Roberts’s performance in the 1996 telemovie, but here he’s weirdly flat, with none of the weird malevolence that dripped from the least of the Master’s lines in the film (“the Asian child…”). Part of that might be the necessity of the story Eddie Robson is telling, where the Master is disguised for much of it… but why get Eric Roberts back and not make him ooze malevolence? But I still think there was an opportunity for him to be obviously off to the audience, if not to River, that would have let him do more of his 1996 thing. Hopefully his upcoming appearance in Ravenous 4 is more in line with the old days. Outside of that, this is a fine story; Robson is always dependable for some great ideas, well-executed. But ultimately we learn less about this Master than we did those in the first two stories, which feels like a missed opportunity given how little of him we already have.

The last story was, I felt, the weakest. River is on a ship of surveyors returning from a successful field mission, only the Master is on board, picking them off one by one. It’s nice to have the Master in a more straightforwardly villainous role, but it’s all pretty rote, and he never feels very dangerous, even if it is Derek Jacobi, because River’s associates are clearly cannon fodder and she herself is arguably invincible. Everyone is also stupidly trusting of an obviously evil computer. It doesn’t have enough tension to pull off its Alien-but-the-monster-is-Sir-Derek-Jacobi premise.

Which is a shame, because overall this is an enjoyable, entertaining set. The Diary of River Song is a consistently entertaining range, and though one still kind of wishes it would forge a unique identity for River more, seeing her with the Master shows off a different side to her and lets us hear Alex Kingston play off some great acting talents.