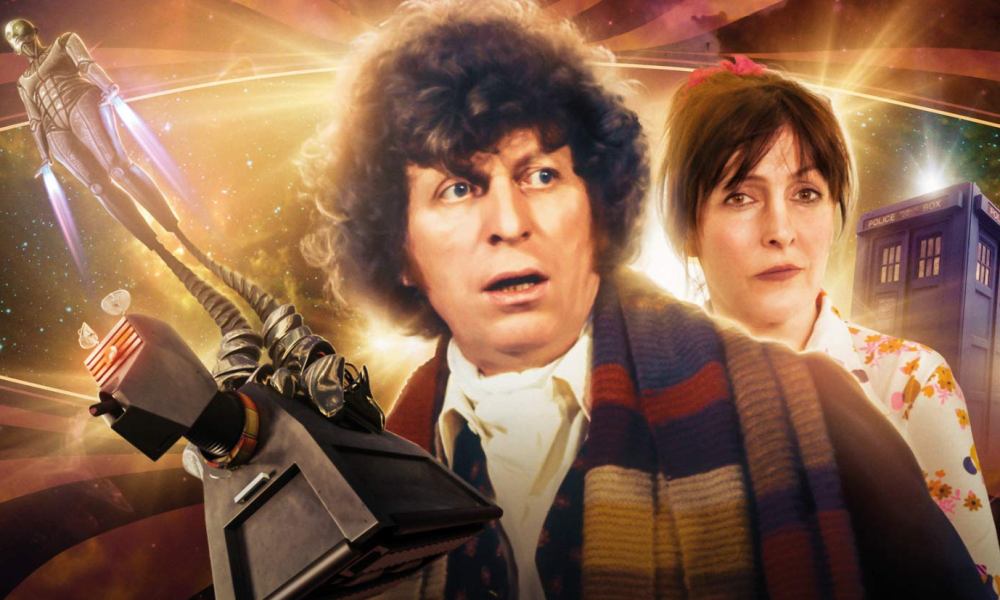 The Syndicate Master Plan draws to a close with its second volume, collecting half of one story and two full others. Tom Baker and Jane Slavin are back as the Doctor and Ann Kelso, with John Leeson’s K9 thrown into the mix, as well as a range of other surprise returning characters. How has Big Finish’s experiment in creating a new Tom Baker companion paid off?

Even if things are a little too nostalgic at times, the addition of Ann Kelso has made this set stand out

Time’s Assassin wraps up the story begun in Volume 1’s The False Guardian, with the Doctor and Ann on a health spa planet kind of — but not really — home to Mavic Chen. Honestly, though I enjoyed it, I wasn’t entirely sure what the point of some of its components were. Why have a false Mavic Chen and even name half the story for him? It’s entertaining, but it ultimately feels like it goes nowhere; if it was meant to be a red herring, the story doesn’t play on it enough. Still, Guy Adams knows how to throw together a fun adventure that gives all the regulars something to do. I was always entertained.

The next story, Fever Island, takes a break from the Syndicate-related shenanigans to parody James Bond; the Doctor, Ann, and K9 end up on a remote Scottish island at the same time as Britain’s top secret agent, Jason Vane, trying to track down time distortion at the same time that he tracks down the dastardly Okulov. Parts of the story are highly enjoyable — K9 asking about dreams gives John Leeson something different to do, and Tom Baker gets to stretch himself in a surprising way, and he also gives a marvellous speech, and Jamie Robertson’s music hovers perfectly on the edge of pastiche, and there are some good jokes. On the other hand, the parody is sometimes a bit toothless, and I’m not sure Doctor Who is the series that should be making fun of the implausibility of other series. Sure, the James Bond version of spying is ridiculous… but the Doctor Who version of everything is ridiculous!

The series wraps up with another four-part adventure, The Perfect Prisoners. As the cover of the set indicates, this brings back as villains the evil alien alliance from The Daleks’ Master Plan. It’s all a bit Peak Big Finish — the bad guys here are from a story that largely doesn’t even exist anymore, so of course I haven’t even seen it. The other weird thing about the story is that it’s a James Bond pastiche (which makes sense, as I feel like James Bond’s Ian Fleming and The Daleks’ Master Plan’s Terry Nation kind of shared an ethos)… but one that plays it entirely straight! It sits awkwardly next to Fever Island, its supervillain doing the exact kind of things that Fever Island mocked.

This series has been greater than the sum of its parts

John-Dorney-does-Doctor–Who-as-James-Bond turns out to be a great formula, though, with lots of great action set pieces and clever escapes. It’s not really like Tom-Baker-on-the-telly, and all the better for it. Jane Slavin gets lots of great stuff to do as Ann as well, though I’m not entirely sure the story pays off what earlier ones set up. Bringing back the aliens from The Daleks’ Master Plan definitely is silly, but Dorney’s script gets some fun out of it, expanding the intriguing glimpses we got in that story into bigger, stranger ideas. The supporting cast is solid, too. I guess what I’m saying is that I don’t know why Big Finish decided to do this, but the result is entertaining enough to justify the effort.

Overall, the eighth series of The Fourth Doctor Adventures has been greater than the sum of its parts, and pretty enjoyable overall. Big Finish has broken out of the straitjacket of the “tea time 1977” formula, and even if things are a little too nostalgic at times, I feel like the addition of Ann Kelso has made this set stand out from the often mediocre Fourth Doctor Adventures; it’s carving out its own era rather than imitating a past one. I know the next two series will go back to TV companions, but hopefully Tom Baker gets more original companions in the future.