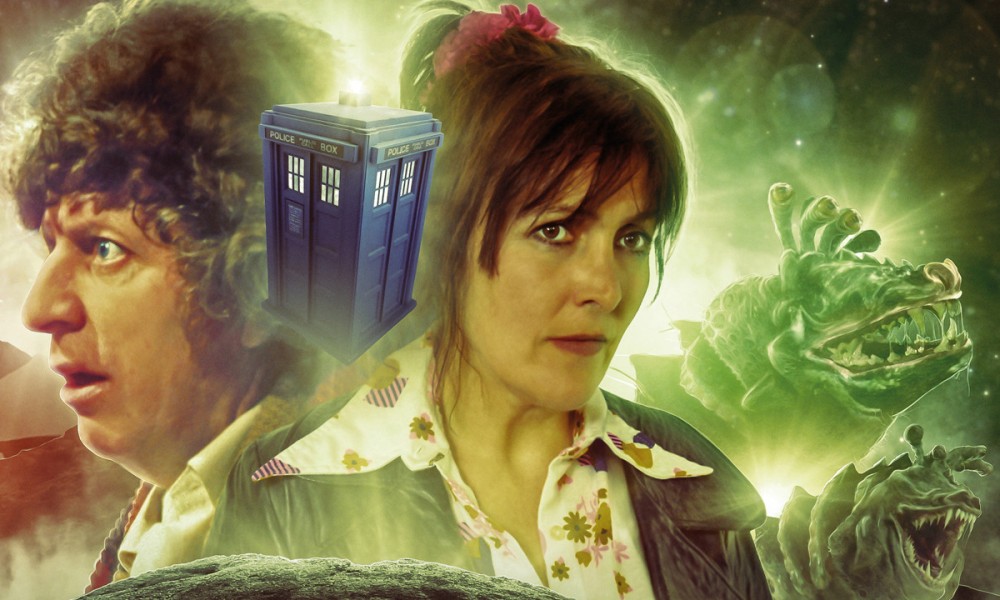 The Syndicate Master Plan evolves the change in format introduced in The Fourth Doctor Adventures’ seventh series, box sets for Tom Baker instead of individual releases. But this season adds two new somethings on top of that. The first is Jane Slavin’s WPC Ann Kelso, a 1970s policewoman, as a new companion — the first audio-original companion Tom Baker has received since his Big Finish debut seven years ago. (Peter Davison, Colin Baker, and Paul McGann all had original companions within a year or two of their audio debuts, slightly longer for Sylvester McCoy.) The second is that an ongoing arc spans seven stories across two box sets. One would be tempted to call it a bit modern, except that The Syndicate Master Plan takes place shortly before the “Key to Time” season, classic Doctor Who’s first set of linked adventures.

Jane Slavin is clearly good casting as Ann Kelso, but I wish she had stories that let her shine more

The Sinestran Kill begins the whole storyline by introducing Ann Kelso in a story by retired policeman Andrew Smith. Ann Kelso is going about her duties when a local gangster tries to intimidate an electronics shop owner, only he uses some extra-terrestrial equipment to augment his hit, drawing the Doctor’s attention. If this had been written by Russell T Davies, I feel like there would have been a scene where Ann really proves herself to the Doctor, showing off some strong police skills and saving the day; as it is, it feels a little flimsy and generic, and part of that genericness is that Ann kind of slots into a typical companion role right away, tagging along more than driving the action. There’s a particularly unimpressive scene where she goes out for food leaving a key witness on his own when she clearly oughtn’t. Still, Frank Skinner as her supervisor is of course good value, and I hope we hear more from him.

Someone at Big Finish must have looked at my spreadsheet and realised there’d never been a return outing for the Drashigs from Carnival of Monsters. I’m not sure why this matters; the Drashigs are one of those monsters that are in a Doctor Who story because a monster turning up to make a cliffhanger is obligatory. No-one likes Carnival of Monsters for the Drashigs, and bringing them back is silly, like building a story around the return of the Shrivenzale from The Ribos Operation or the Magma Beast from The Caves of Androzani. Phil Mulryne’s Planet of the Drashigs doesn’t make the concept worthwhile; it’s filled with stock characters, and being told that these Drashigs are really quite big is a pretty pointless development on audio.

The Enchantress of Numbers dips into history for an Ada Lovelace-featuring “celebrity historical”. The daughter of Byron and genius mathematician is at the centre of some strange events. What makes her so tired? Is her father back from the dead? Did there used to be a hedge maze there? Simon Barnard and Paul Morris turn in a clever story with neat concepts and fun characters — Finty Williams is good as Ada, while Jeremy Clyde and Barnaby Edwards play stock characters with charm and warmth. (Though it was a little distracting when Edwards turned up in a second role; at first I thought it was his first character in a disguise with a bad accent.) There’s perhaps a little too much block transfer computation nonsense driving the plot, but I enjoyed the story’s willingness to play with structure moreso than other Fourth Doctor Adventures; it begins in medias res, and eventually some big plot points are filled in via flashback, hardly — but welcomely — the kind of thing that would have happened on screen in 1978.

The set wraps up with The False Guardian, which kicks the story arc into higher gear. The Doctor, Ann, and K9 arrive at a mental health resort planet pursuing the backers of the Sinestrans. This story is hard to judge, as it’s clearly Parts One and Two of a four-parter, but what’s here is decent, if sort of weirdly lacking in urgency, as our heroes just kind of wander around learning things. Writer Guy Adams is good at introducing the small comic moments that bring it all to life, and Blake Ritson puts in a charming, amusing guest performance.

Jane Slavin has shown herself to be a solid Big Finish contributor over the past couple of years, and is clearly good casting as Ann Kelso. I like the character, but I wish she had stories that let her shine more. Like I said, she’s a little underdeveloped in her introduction, and she’s pretty generic in Planet of the Drashigs. But Enchantress of Numbers gives her plenty to do, and her role in False Guardian shows promise. Big Finish talk about what good chemistry Slavin has with Tom Baker (she reads in for companion actresses when they’re not at the same recording as Baker), but the writers don’t seem to quite know how to write the relationship — she’s a bit more Tegan-style mock-moaning in False Guardian than elsewhere. Still, I look forward to hearing her develop in Volume 2.