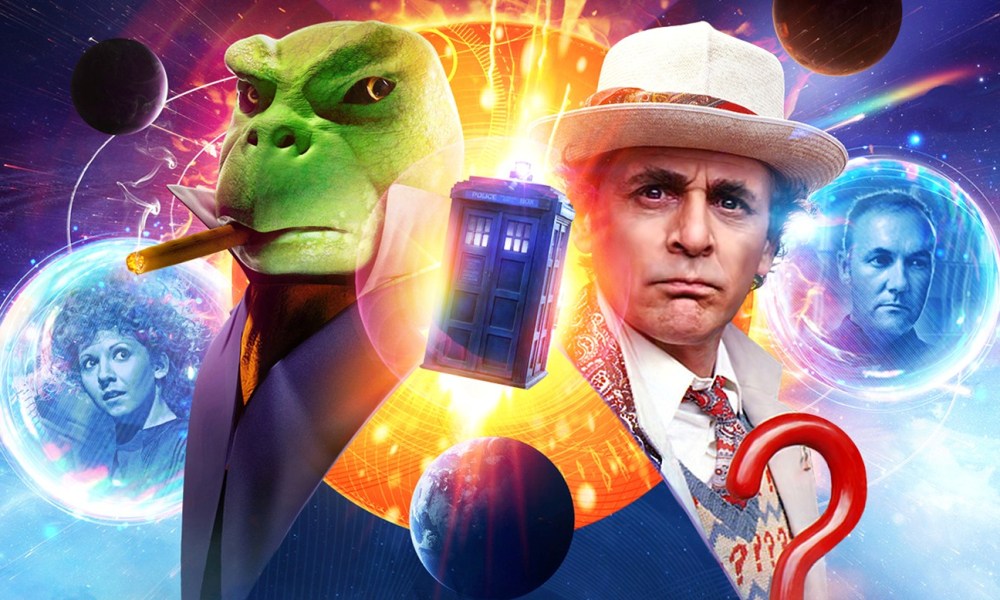 Big Finish may borrow from televised Doctor Who to excess, but it’s actually pretty restrained when it comes to pulling from tie-ins, even itself. So there’s always a little bit of frisson when Big Finish “crosses the streams” as it were. For example, back when UNIT: Dominion came out, it seemed like Raine and Klein came from two very different corners of the Doctor Who universe, and they had wound up in a third. The Quantum Possibility Engine is the latest in Big Finish’s Ace/Mel main range strand, sure, but also features Seán Carlsen’s Coordinator Narvin, a character largely confined to the Gallifrey spin-off, and Toby Longworth’s Josiah W. Dogbolter, a character original to the Doctor Who Magazine comic strip who last appeared in a Big Finish adventure over 15 years prior. Plus it throws in Wayne Forester’s debut as Hob, Dogbolter’s robotic assistant, who previously only appeared in the strip.

But the results are entertaining: in fact, this is the most entertaining any of the Ace/Mel stories have been. It’s not a great story, but it is the first one I feel like I could recommend without too many qualifications. Following on from the epilogue to Red Planets (and, I’m guessing, The Dispossessed, but I skipped that one; actually the join is pretty seamless without it), Mel has betrayed the TARDIS crew to Josiah W. Dogbolter, corrupt businessman who’s lusted after the secrets of the TARDIS ever since 1984’s comic strip The Moderator. Only, because of how time travel works, Dogbolter actually builds an empire in the solar system with the TARDIS before Mel even hands it over.

Toby Longworth was delightful as Dogbolter in The Maltese Penguin, and he continues to be so here, a self-absorbed businessman from the eighty-second century interested in nothing other than profit. He’s just fun to listen to, as Longworth knows to lean into the character’s over-the-top nature. That he’s been elected — quite legitimately — to presidency of the solar system adds a delicious tweak with just a smidgen of topicality. Forester also delights as his unctuous assistant Hob, especially in his interplay with Mel. The two comic characters come right off the comics page; I think when I next read The Moderator or The Stockbridge Showdown, it will definitely be their voices I hear.

I haven’t ever listened to Gallifrey, but I know Narvin from his appearances in The Worlds of Doctor Who, Dark Eyes 3, and Short Trips: Erasure. This is helpful, because it makes the contrast in his appearance here stronger; at one point, Narvin, the Doctor, and Ace all end up assuming “normal” lives, and basically every line Seán Carlsen delivers as Narvin-the-Inventor-of-Top-of-the-Range-Kitchen-Appliances is an act of genius.

Actually, this subplot provides stronger material for both Sylvester McCoy and Sophie Aldred than they’ve had in any other Ace/Mel story I’ve heard (except maybe Aldred in Red Planets). Aldred does better with Ace when the character isn’t written like she came out of a comic book (ironically), and Adams’s script gives her some good stuff to do here. McCoy was probably born to play the role of a forgetful, accident-prone janitor. On the other hand, much of Ace’s subplot was done better in A Death in the Family, and I was thoroughly unconvinced by some of the choices that Mel makes, though I kind of ignored that, as there’d be no story otherwise.

I did find myself disappointed in the story’s resolution, because the problem resolved at the end of the story is not actually the one laid out at its beginning, which we’re told Narvin will just take care of later! The ending is pretty satisfying, but I found this bit of redirection pretty odd.

The story’s score is provided by Joe Kraemer, and I found it mixed: some surprisingly good orchestral pieces. But on the other hand, all Big Finish composers should be banned from ever writing “comedy” music, because nothing undermines comedy faster.

If a story that gets more than normal out of the many possibilities of Doctor Who appeals to you, then pick up this one. You don’t actually get to hear Narvin meet Dogbolter, alas, but it’s a clever story with some good ideas and sharp twists and quick jokes.