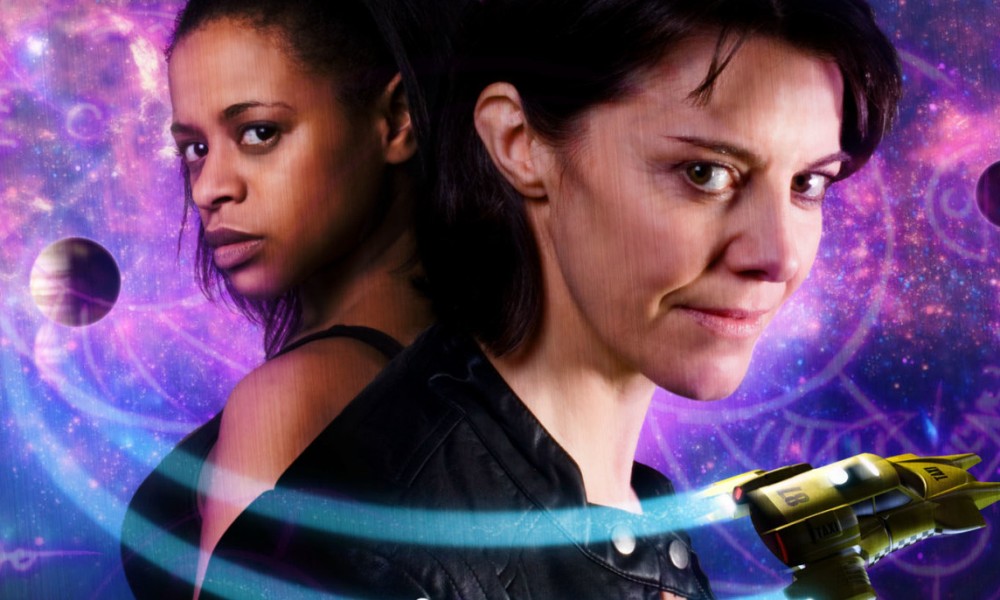 At the end of Epoch, Bernice Summerfield received a message from Irving Braxiatel telling her that her son Peter was on a distant planet called Legion; Road Trip, the next box set in the series, consists of three standalone stories about planets Benny visits while travelling from Mars to Legion. Only, she has no idea where Legion actually is!

Road Trip is a less ambitious set than Epoch, but probably more successful for it

The first two are pretty light-hearted adventures. Brand Management by Christopher Cooper takes Benny to the somewhat dystopian world of Lyndyaz, ruled by a corporation that appeases the people by buying religions from other planets and importing their tenets — the day of Benny’s arrival ends up corresponding with the day of the Beneficiary, who is actually her. (It turns out a cult sprung up around her during her time in suspended animation on Mars at the end of Epoch.) But also Benny is there because she’s been hired to excavate her own tomb! I ended up feeling like neither of these ideas really got the attention they deserved (the excavation doesn’t even get started, and the reason the cult of Benny springs up on an entirely different planet to the one where she slept requires a lot of exposition), because most of the story is a tussle between Benny and the evil oligarchs ruling Lyndyaz, a pretty familiar style of Doctor Who-adjacent story. It’s fun enough, if a little contrived in parts.

The second story sends Benny, now joined by Ruth (more on her later), into a religious order disguised as nuns because the information they need about how to get to Legion is on an ancient artefact in that order’s vaults. (Quite how anyone else in the galaxy manages to find Legion is never adequately explained, because from this set and the next one, it’s pretty obvious that everyone else is able to get to the planet quite easily.) Bad Habits is by The Scarifyers and Jago & Litefoot stalwarts Simon Barnard and Paul Morris, and is about as barmy as most of their work. It’s a kind of odd tone for a Benny story that took some getting used to, but I soon came to enjoy it, as the story’s ridiculously improbable mystery is unfolded with weird revelation on top of weird revelation.

The set’s final story, David Llewellyn’s Paradise Frost, is a bit of a change of tone, a survival thriller on a deserted holiday world; Benny and Ruth are joined by a space cabbie and two employees of the resort as they try to make their way to safety. It’s a little contrived, too (one suspect the passwords of people smart enough to run financial empires are not quite this obvious, nor that their experimental protocols are really this lax), but it works as what it’s supposed to be.

In addition to the three actual stories, there’s a lengthy ten-minute post-credit sequence on the third disc that details Benny and Ruth’s arrival at Legion; I’m guessing it was written by either Gary Russell or Scott Handcock (or both). It intrigues, but it already has me a little sceptical of the set-up for the stories set on Legion to come.

Benny is played as ever with skill by Lisa Bowerman, though I do kind of roll my eyes when the writers treat the character’s interest in alcohol as though she is an immature undergraduate. I thought it was weird that when she meets a Killoran in one of the stories, it’s said that Killoran is like Peter — who is only half-Killoran — and Benny’s close friend, Adrian the full-blooded Killoran, isn’t mentioned at all.

The blurbs for each individual story don’t actually mention her, so I feel like Big Finish was trying to keep her return ambiguous, but she’s on the cover, so I think it’s fair game to mention that Ayesha Antoine returns as Ruth, now firmly ensconced in the role of Benny’s companion. I like the idea of Benny having a companion of her own, but I don’t think Ruth is engagingly written, even though Antoine plays her with as much enthusiasm as she can muster. I don’t have sense of what she actually wants, why she follows Benny around. If it’s so that she too can be trained as an archaeologist or historian, that’s more implied than made clear, and doesn’t really inform the way the characters interact.

The set features a range of guest stars familiar to Doctor Who fans: the actors who play Rani Chandra, Sylvia Noble, Charley Pollard, and Rory Williams all return here in new roles. I don’t know how effective it really is from a marketing standpoint (if you were just looking at the physical box set from the outside, you’d only know if you read some small text on the back cover), but it is enjoyable to hear familiar voices doing unfamiliar things. Anjli Mohindra gets to play a bratty but intelligent villain, Jacqueline King a haughty but eccentric nun, and India Fisher a less plummy and more demoralised person than Charley ever was. (Arthur Darvill’s character, sadly, leaves little impression.) Outside of them, I also really enjoyed Nigel Lambert’s over-the-top turn as a space bishop and Alan Ruscoe as the racist space cabbie.

Road Trip is a less ambitious set than Epoch, but probably more successful for it. None of these stories are in the Bernice Summerfield greats, and no-one is likely to ever be nostalgic for the “road trip” period of the range in future, I suspect, but these stories are entertaining enough to be worth your time, and nowhere near as frustrating as the previous box set. I think this range can do better, but it can definitely be worse.