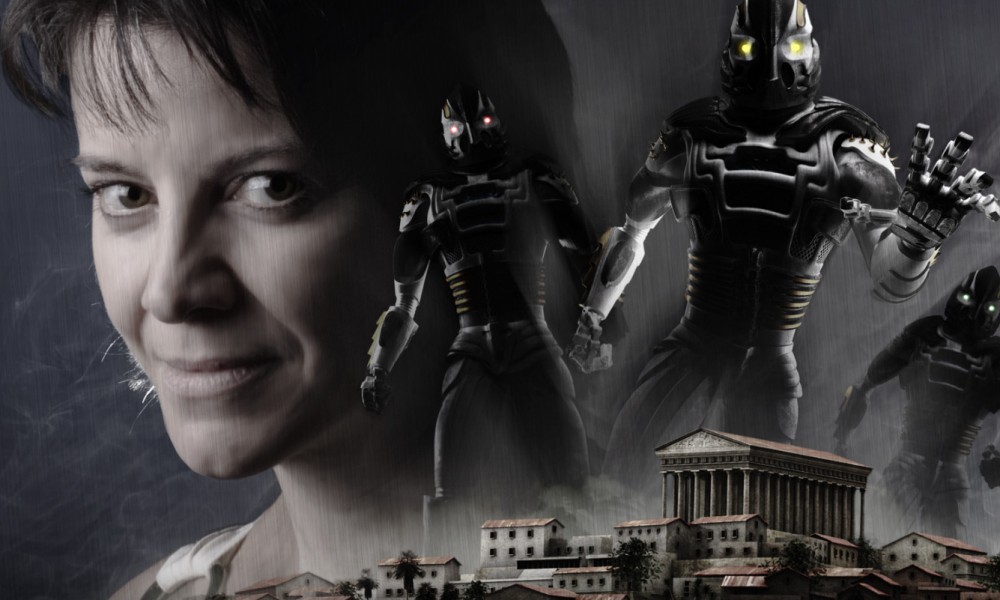 Epoch marks a new, well, epoch in the ongoing adventures of Professor Bernice Summerfield. 2011 saw the range transition to the same format most of Big Finish’s other Doctor Who spin-off ranges had adopted, a sequence of box sets. The first of these was Epoch, which focuses on setting up a new goal for Benny, introduces a new cast of characters, and ties up the plot threads introduced in Year Zero and Dead Man’s Switch.

Epoch has to set up a new status quo, and I’m not sure how successful it is

Let’s start with the last of those goals first. If you’re thinking of listening to Epoch solely to find out the solutions to the mysteries raised in those two stories… then don’t. Epoch seems to have been written by someone who only had a garbled plot synopsis of Year Zero to go off, except that there are some very specific callbacks to the first story, so it’s clear they must have had access to the finished production. In Year Zero, Benny discovered an interplanetary society that had forcibly erased its own history, willingly abrogated leadership to a distant computer called “the Great Leader”, and prevented new history from accumulating by constantly redesignating proper names. This was shown most dramatically at the end of Dead Man’s Switch, when Benny finally reached the Great Leader’s home planet of Zordin, only to be told it had been redesignated “Atlantis” and to recognise it as the planet originally designated “Earth”!

Epoch, however, presents a pre-spaceflight society where a supercomputer isn’t “redesignating” things, but literally transforming them; things have their histories erased and become completely different. Whatever futuristic planet Benny was going to land on was magically transformed into a classical civilisation called Atlantis. A civilisation where no-one knows about redesignation, or that they are ruled by a computer! When Benny uncovers the answers, they end up bearing little relationship to the questions introduced in Year Zero and Dead Man’s Switch.

I get that a producer transition happened between this and the previous release, but it’s still pretty disappointing, and I’m sceptical that the handover couldn’t have been smoother. Whatever the behind-the-scenes reasons are, it makes for profoundly unsatisfying listening even on its own terms; even the mysteries set up within Epoch itself aren’t satisfactorily executed. But I’ll get to that as I discuss each episode on its own.

The Kraken’s Lament sets the whole thing up with a story by Mark Wright. Benny is slightly amnesiac (this happens a lot in the set, and feels less a like a natural consequence of anything, and more like an unnatural way of drawing out the story by having Benny be unable to remember things she already should know from Year Zero), but a vague memory pushes her to Acanthus, a local storyteller (where she received this memory from is never explained). It’s an okay adventure, but not terribly remarkable, and surprisingly pointless in the scheme of the box set.

The Temple of Questions actually provides some answers; Jacqueline Rayner’s script gives Benny new friends in Leonidas and Ruth, and they investigate the ground under the ground, as well as the Great Leader. What we learn about the Great Leader, though, is pretty nonsensical. A supercomputer capable of running an interstellar civilisation and rewriting history isn’t capable of operating listening devices and a countdown clock simultaneously, allowing Benny to beat it in the slightly rubbish way Captain Kirk always outsmarts computers on Star Trek.

Tony Lee’s Private Enemy No. 1 picks up from the end of the previous story, with Benny, Ruth, and Leonidas now possibly heroes, possibly fugitives. Unfortunately, it’s not much of a story; Benny and company just kind of run around in circles learning tidbits that don’t really matter until the story ends. The story attempts to play the power of the Great Leader to rewrite pasts for tragedy, but the story itself makes it difficult to care. Tony Lee’s dialogue is the weakest in the set. The whole story opens, for example, with a scene where Leonidas explains to Benny the reasons she’s doing something that she’s been doing for days. Plus, in classic Tony Lee fashion, it directly nicks bits from better Doctor Who stories, with a joke straight out of The Stolen Earth. And the climax hinges on Benny’s ability to read body language, proving Lee has read Paul Cornell’s original character description, but I kind of sigh whenever it’s brought up in a BF story, because it’s mentioned so rarely and so inconsistently that it reeks of contrivance when used.

Scott Handcock attempts to wrap the whole story up with Judgement Day, but it’s a very bizarre story that’s hard to care about. Benny must decide which parallel version of herself is real, so we listen to Benny watch two other Bennys go on adventures, rotating between the three of them. The stakes feel very abstract and undramatic. What on Earth could be the consequence of the wrong Benny who is in every respect identical to the real Benny being chosen? And the explanation as to what the Epoch is and what’s behind Atlantis is so full of technogubbins as to be incomprehensible and completely undramatic.

Aside from telling four individual stories, Epoch has to set up a new status quo for Bernice Summerfield. I’m not sure how successful it is. Away from the Doctor, Benny works the best when grounded in a time and a place, and this box — unlike Year Zero’s set-up — kind of does the exact opposite. With no real goal beyond finding Peter, it seems like Benny just says, “I have to find Peter” a lot as the extent of her character. Marcus Hutton is introduced as new love interest for Bernice, Leonidas, but their “flirtatious” dialogue is pretty frequently poor. Ayesha Antoine’s Ruth was nice, but kind of bland. And if it wasn’t for the fact that he’s on the cover of later releases, I’d wonder why David Ames’s Jack was even in this; within Epoch, you could delete his character with no real consequences. But clearly it’s to set up later appearances, so I’ll reserve judgement for now.

The set also contains Dead and Buried, the animated short that bridged the gap between Secret Origins and Resurrecting the Past. Though you can see it for free on the Big Finish YouTube channel, it’s a nice inclusion; this meant that I was able to watch it with ease on my television in the appropriate gap. Most of the short is an extended action sequence, but it’s cool to see Benny in action, doing something that wouldn’t transfer well to audio.

There are also two documentaries. One is a “making of” for Dead and Buried, which is neat, but I do find it a little weird that literally the only person who appears in the documentary is co-writer, director, and animator Alex Mallinson. He gives a thorough explanation of the process, but it would have been nice to hear from Lisa Bowerman about what it’s like to be transferred into animation, or producer John Ainsworth about Big Finish’s motivations in going this direction. The second documentary is Bernice Summerfield Rebranded, which is about the Epoch relaunch itself, and features contributions from Scott Handcock, Gary Russell, Paul Cornell, and many of the actors. It’s mostly hype, so there’s not a ton of insight, but I did learn that 1) Lisa Bowerman did a special photo shoot for the box set covers, so she’s actually wearing that Greek outfit, not just photoshopped into it as I assumed, and 2) Scott Handcock is crazy young (or at least he was in 2011).