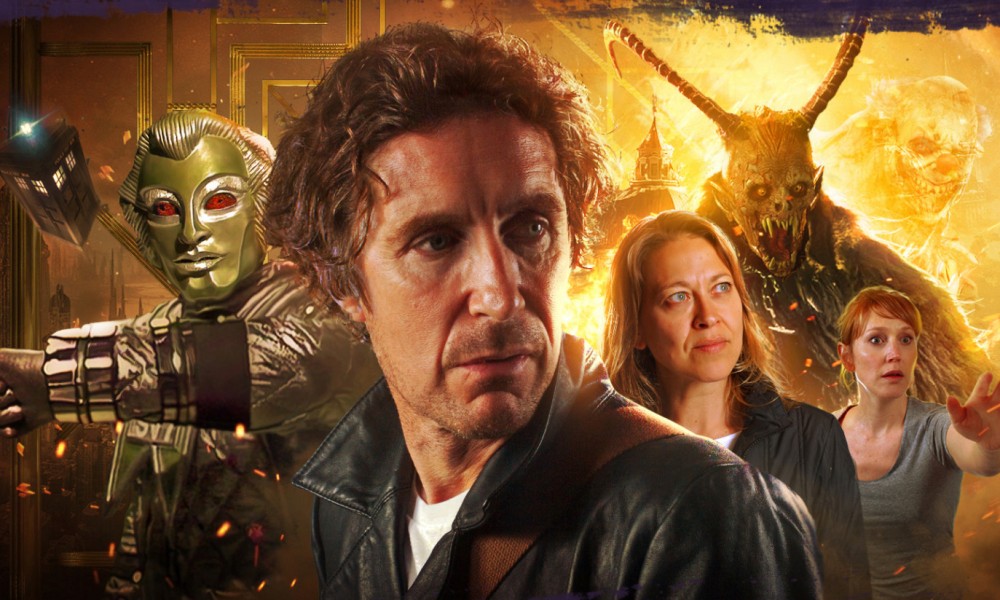 Ravenous 2 continues one of the Eighth Doctor’s two different sagas — overlapping in production if not internal chronology. One may recall that I was sceptical about Ravenous 1, and one contributing factor was the depiction of the Ravenous themselves. Or rather, the lack of depiction. While we may have ended Doom Coalition 1 without even a hint that there was a “doom coalition” out there somewhere, we at least knew about the Eleven and the threat he posed; Ravenous 1 just gave us the vague piece of information that something called the Ravenous existed somewhere.

Like its predecessor, Ravenous 2 is only loosely arced, making one wonder why Big Finish even bother. It consists of three stories, the first of which, Matt Fitton’s Escape from Kaldor, brings the TARDIS back to Kaldor, setting for the Tom Baker serial The Robots of Death. Ordinarily I would complain about gratuitous continuity, but the Eighth Doctor’s companion Liv Chenka is actually from Kaldor, so this is less gratuitous than many Big Finish reuses of old monsters. That said, it won’t set your world on fire. Matt Fitton’s script is competent, but fairly predictable. Robots once again rise up. The answer to what’s causing it isn’t as simple as “desire for freedom” or “reprogrammed for evil”, but I didn’t find it particularly interesting, either. The best part of the story is the character work, but that mostly comes through Liv and Helen having a conversation about how they feel, and then the plot starts, rather than being integrated into the plot. Also I found the ending weirdly unsatisfying, as the Doctor doesn’t even seem to react to the grossly malignant actions of the closest thing the story has to an antagonist.

The set’s middle story by John Dorney, Better Watch Out and Fairytale of Salzburg, is a two-parter about the Krampus, the dark inverse of St Nicholas from European legend. The Doctor, Liv, and Helen land in Austria at Christmas time, just in time for the traditional Krampus run — but you might not be surprised that this time, the Krampus is real. It’s a story packed with Christmas clichés (one character takes his playbook right from A Christmas Carol), but in a reassuring, cosy way that contrasts well with the story’s forays into horror; a scene where Liv interacts with the Krampus’s goblin helpers is particularly good.

It’s not just Doctor Who Meets the Krampus, though, and is all the better for it; Dorney’s story has an unconventional narrative structure and it takes a little while for the listener to put it all together, but it’s worth it. The highlights were, for me, a set of two really strong character-driven performances: Siân Phillips as the Pilgrim, and Raad Rawi as the Bishop. There are also lots of good jokes, particularly those delivered by a more-enthusiastic-than-normal Paul McGann. My main complaint is that the Krampus itself feels somewhat wasted on this story, as it very much becomes about something else entirely in its final act. I’m glad the Krampus inspired Dorney to write this story, but I kind of suspect the great Doctor Who Meets the Krampus story is still to be told.

The set closes out with the actual introduction of the Ravenous in Guy Adams’s Seizure. In theory, this could be a good story, with something so evil it even frightens the Eleven, and an isolated Liv Chenka fleeing for her life. In practice, I found it dull. The Ravenous snarls a lot; its power is being hungry, apparently. I just don’t see anything here that will put it in the pantheon of memorable Doctor Who villains, but there are two whole box sets to go. Mark Bonnar’s Eleven is less interesting than normal, too, less complex and more one-note. The direction isn’t very frightening, nor is the sound design, and characters saying creepy things are happening like walls leaking blood will never be creepy on audio. I feel like this is a story that should have worked with sound and silence to make something ominous, and I know from Guy Adams’s Torchwood work that he ought to be able to creep the pants off the audience, but there’s essentially nothing here.

Benji Clifford’s sound design is uncharacteristically flat; in addition to my issues with Seizure, the climactic showdown with the Krampus feels very empty and undramatic, like everyone is just standing around waiting for dialogue to be delivered, including the Krampus itself.

Maybe Ravenous 3 and 4 will turn things around for me, but I’m kind of wondering if Big Finish perfected the 16-part Eighth Doctor epic with Doom Coalition, and everything will be downhill from here. Dark Eyes was a bit of a mess, but also ambitious, with some excellent highs even if I still live in fear of hearing the words “retrogenitor particles”. Doom Coalition was good on a first listen, and even better on a second, when I saw the whole picture; definitely the kind of story that’s greater than the sum of its parts. But I’m having a hard time seeing the loose and largely mediocre standalones of Ravenous become so. I mean, I’m along for the ride for anything Big Finish make with Paul McGann in. But I’m really wondering if the four-disc box set is the best way forward from a creative perspective.