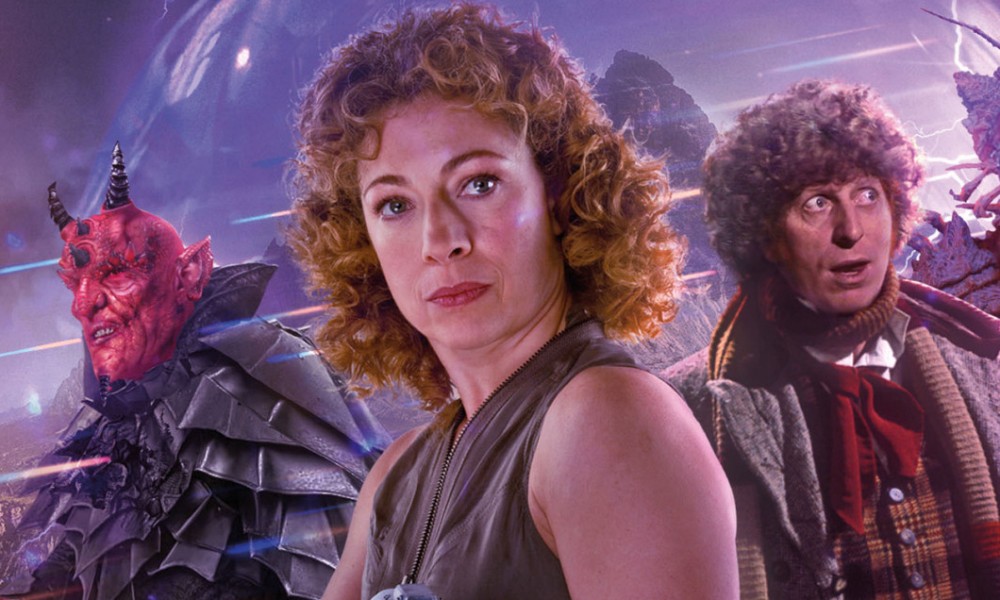 The previously annual Diary of River Song series picks up the pace somewhat with its fourth volume, just eight months after the last one, and also continues its backwards journey through time, with River now meeting Tom Baker’s Fourth Doctor. While Series Two and Three experimented with different ways River could meet the Doctor, Series Four reverts to the format of Series One, with River fighting the same bad guy across four stories, pulling in the Doctor for the final story of the sequence, just in time for the grand finale.

What could be some solid stories rest on somewhat shaky foundations: the Discordia

River’s main antagonist for this series are the Discordia, nigh-omnipotent super-aliens with time travel, who travel back in time whenever they are defeated to rewrite history to their advantage. In the absence of the Time Lords, they’ve become the dominant power in the universe, and they abuse their power. It’s a decent concept, but for me it was undermined in two ways. One, they all have deepening effects placed on their voices, which makes it harder for the actors’ performances to come through and makes them sound more generic. The second is that they all look like devils, which I think is supposed to be scary, but my feeling is that traditional devil imagery long ago lost its frightening status, not to mention that this is audio, so even if it could be scary, a bunch of people going, “gosh, you lot look like devils” doesn’t make it so.

Which is a shame, because it means that what could be some solid stories rest on somewhat shaky foundations. This is very much a box set of two decent stories and two so-so stories. The so-so stories are the first and the third, Time in a Bottle by Emma Reeves and Matt Fitton and Whodunnit? by Matt Fitton. Time in a Bottle sends River as part of an archaeological expedition to a timeless planet, along with an old grad school rival (Fenella Woolgar’s Professor Jemima Still), a warrior ant (Adele Lynch’s Gammarae), and a warrior-cyborg-turned-geek (Josh Bolt’s Spod). It’s basically fine, your typical sort of exploring-a-tomb story, but I find that once the Discordia themselves turned up, things got a little muddled and confusing.

Whodunnit? is fun at first, but quickly wears thin. River is in her Melody Malone incarnation here, one of a number of detectives assembled at a mysterious castle to solve a murder by invitation. The other detectives are all pastiches of established characters: there’s a Lord Peter Wimsey, a Poirot, a Father Brown, a Scooby-Doo riff, and so on. On top of that, the whole thing kind of feels like the Cluedo film. Yet Franz Kafka is also in it? The detective jokes are fun at first — I particularly like the over-the-top classism of the Wimsey riff — but they soon become one-note, and since it’s obvious none of it can be real, it’s hard to invest too much in what you’re listening to. Plus, the inclusion of Kafka doesn’t really fit at all. Fitton opines in the extras that the story has a lot of Kafkaesque elements, but it’s only true in the most banal sense: there’s a confusing castle (like in The Castle), a nonsensical trial (like in The Trial), and a giant bug (like in The Metamorphosis). But none of these things feel Kafkaesque in their execution here, and combining Kafka with goofy versions of early twentieth-century detective characters… well, those things don’t actually go together, do they? The story also goes on too long past the point where you finally do figure it out.

The other two stories are stronger, but undermined by the Discordia. Kings of Infinite Space by Donald McLeary has River and friends on the run from a Discordia, jumping through time again and again via her vortex manipulator. It starts out kind of goofy, a knock-off of Doctor Who’s The Chase, but as it goes on, it gets quite intense. For the first time, we get real validation of the Doctor’s assertion that vortex manipulators are “cheap and nasty” compared to TARDISes (seen again on screen just the other week in Rosa), as the longer River and company make jumps through time, the closer they get to dying. The last several jumps have a real sense of poignancy and desperation to them, thanks especially to Alex Kingston’s performance. She always does what’s needed, of course, but I find it especially nice when she’s pushed to go beyond flippancy and give us something really heartbreaking, and she does so here. But I found the whole thing somewhat undermined by the fact that the guy chasing them isn’t remotely intimidating, no matter how many innocents he kills. It’s an odd story — I don’t think it would occur to me to do a serious version of The Chase but leave all the jokes in — but it works somehow. The bit about how one place River gets to is just a rip-off of Moonraker was probably the best bit, but I enjoyed a lot of it.

The finale is John Dorney’s Someone I Once Knew, which unites River with the Fourth Doctor. The pre-titles is very clever, and I liked the overall conceit of the story, matching River with a Tom Baker Doctor who’s more familiar with her than she expects. But the story seems torn between two different purposes: on the one hand it’s about River and the Fourth Doctor having adventures together, on the other, it’s about River being wooed by a member of the Discordia, who’s clearly meant to be a sort of stand-in for masculine entitlement, the kind of guy who thinks that if you do everything a woman wants, she’d be obligated to love you. The second storyline takes away from the first, such that we get comparatively little of Tom Baker and Alex Kingston together. And the problem is that the second storyline, like most things involving the Discordia, is not that interesting. Give me more of the Fourth Doctor Who flirting with River Song! The story’s potentially emotional ending is undermined by its focus throughout.

I’ve enjoyed every Diary of River Song box set, but I have to say that I enjoyed this one the least. While the third series set a new high for the range, this one sets a new low. I hope that in future instalments, Big Finish are able to find River opponents worthy of her. (One suspects that if the Master isn’t, then who is?)