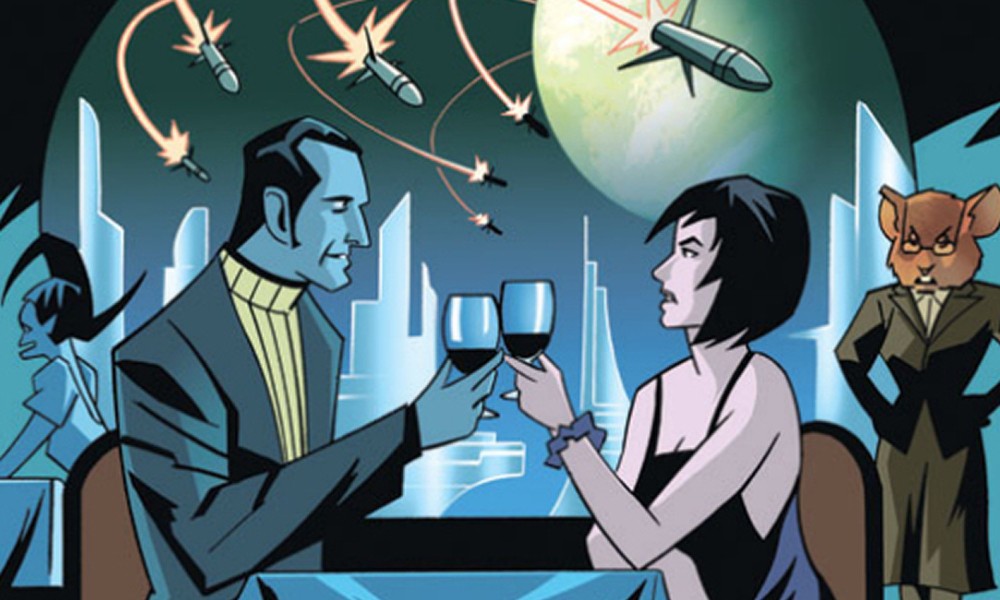 In Venus Mantrap, Bernice Summerfield finally makes it to Venus in order to acquire the financial estate of Jason Kane, in a story about as tonally different from Absence as one could get. While Absence was a gloomy, introspective piece, Venus Mantrap is a farce. Benny bickers with an old romantic rival who looks like a hamster, the late Jason Kane’s xenoporn plays a key role in the plot, and the location of Benny’s pants turn out to have a significant role in averting nuclear war.

Perhaps this could all be quite terrible. Well, it’s definitely not — I can’t remember the last time I laughed at a Bernice Summerfield story this much, or even any Big Finish story full stop. It’s delightfully farcical. Benny has to pretend to be a mind-reading sex robot, for example, or we hear a hamster alien (Professor Megali Scoblow, who previously appeared in the New Adventures novel Beige Planet Mars) describe her sexual escapades with Jason, or Benny manages to implicate Scoblow as a political operative. It’s all basically ridiculous, and I loved it. Lance Parkin and Mark Clapham’s script does a great job of the slow escalation of farce, coming to a sticky climax in a scene where Ian Brooker runs afoul of a teleprompter.

Lisa Bowerman shows that she can do comedy as well as tragedy — not to mention passion. What helps is that it’s all actually anchored in character, too. Benny is uncomfortable with her role because she hasn’t been in a relationship since Jason died, but she’s clearly also in need of a relationship because of that. Luke Sorba is good fun as N’Jok Barnes, Benny’s client, and I particularly enjoyed the performances of Ian Brooker and Jo Castleton. Brooker is a Big Finish go-to for pompous windbags, and this is probably his best yet. (Again, I refer you to the story’s climax.) Jo Castleton probably never dreamed she’d be playing a sex-starved romance counsellor erotica editor ex-academic gerbil alien, but let’s just say she acquits herself well.

Like I said, this is about as far from the tone of Absence as you can get — but it’s also just a much of a triumph. Venus Mantrap shows off Bernice Summerfield’s unexpected flexibility, in more ways than one.