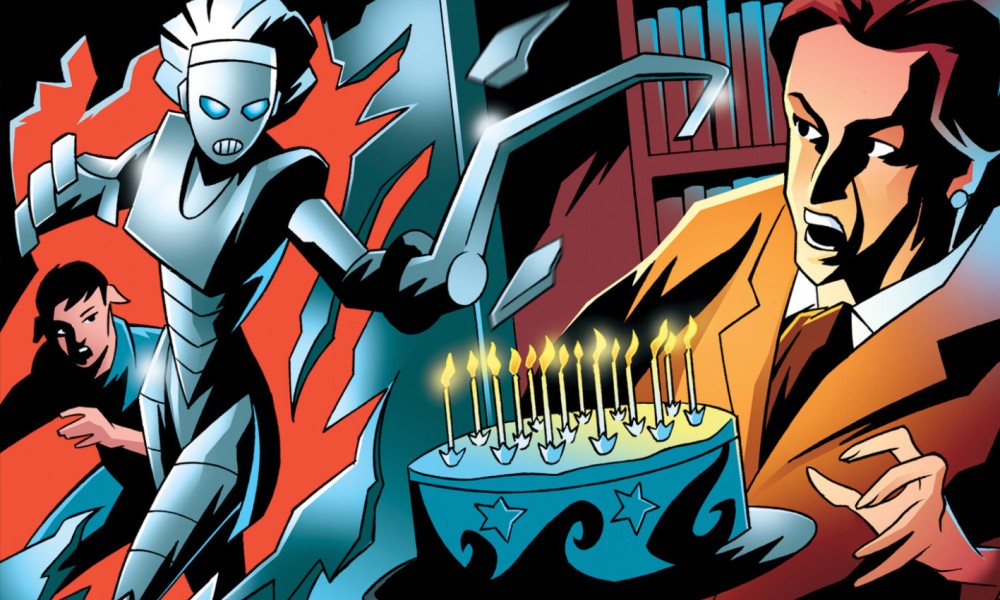 The Diet of Worms by Matthew Sweet rounds off the ninth series of Bernice Summerfield. After the events of The Adventure of the Diogenes Damsel, Benny and Peter have been reunited, and Benny is looking for work, applying for a position as an archivist, and also bringing along papers she got from Mycroft Holmes to deposit. Like all the stories of the ninth series, it’s a standalone; also like all the stories of the ninth series, it has a striking central idea, that of literal “book worms”. I don’t think it gives too much away to say the story is about book worms that absorb the content of the paper they eat, able to speak, but only the words of Martin Luther or Charles Darwin.

Like in the best Bernice Summerfield stories, it feels like Benny’s interacting with real people whose lives she’s stepped into

The Diet of Worms reminded me a lot of Timeless Passages: like Timeless Passages, it takes place in an isolated library environment with a small cast of characters, and a distinctive tone. While Timeless Passages has a desperate tone, Diet of Worms is more whimsical. Sweet has excelled in coming up with off-kilter ideas in Year of the Pig and his many Jago & Litefoot contributions, and he does so here as well. It’s not just the book worms, it’s the idea of a prolific romance novelist becoming one of Earth’s greats, it’s so much of the story turning on the interactions between Peter and a baking robot, it’s the clever ways the characters work out how to communicate with the book worms, it’s the way small details from the beginning are organically revealed to be meaningful by the end.

Diet of Worms has a small cast, but it makes a virtue of it. There’s Benny and Peter of course, with Peter turning in one of his best performances yet, I think because the script takes him seriously as a person with his own wants and needs, e.g. to help his mother and to eat cake. Beth Chalmers plays Myrtle Bunnage, the director of the archive, as well as Mrs Tishpishti, the baking robot, and a number of other robots. Chalmers does an excellent job in both roles; both characters felt “real” and distinct even though they share a voice. Matthew Sweet himself even turns up as a financial examiner! Professor of Victorian literature, writer of audio drama, and actor — is there anything the man can’t do? The story keeps the characters all interesting, and the small cast reflects the poor funding of the archive, so it feels organic. Like in the best Bernice Summerfield stories, it feels like Benny’s interacting with real people whose lives she’s stepped into, not people standing around waiting for her, even if one of them is a baking robot.

David Darlington does his typically excellent job on sound design here; I especially liked the effect for the voice of the worms.

I really liked the set-up of the Braxiatel Collection that drove the storytelling of Series Seven and Eight of Bernice Summerfield, and I was sorry to leave it behind. But, on the other hand, Series Nine has shown that Benny and Peter on their own, having adventures, can really work as a set-up for the series, with three strong releases in Beyond the Sea, Diogenes Damsel, and then this finale. Even though the end of this episode promises some of the Collection elements will return to Benny’s life, producer Eddie Robson’s new approach to the range has been a success so far.

The Diet of Worms (by Matthew Sweet; starring Lisa Bowerman) was released by Big Finish Productions in October 2008.