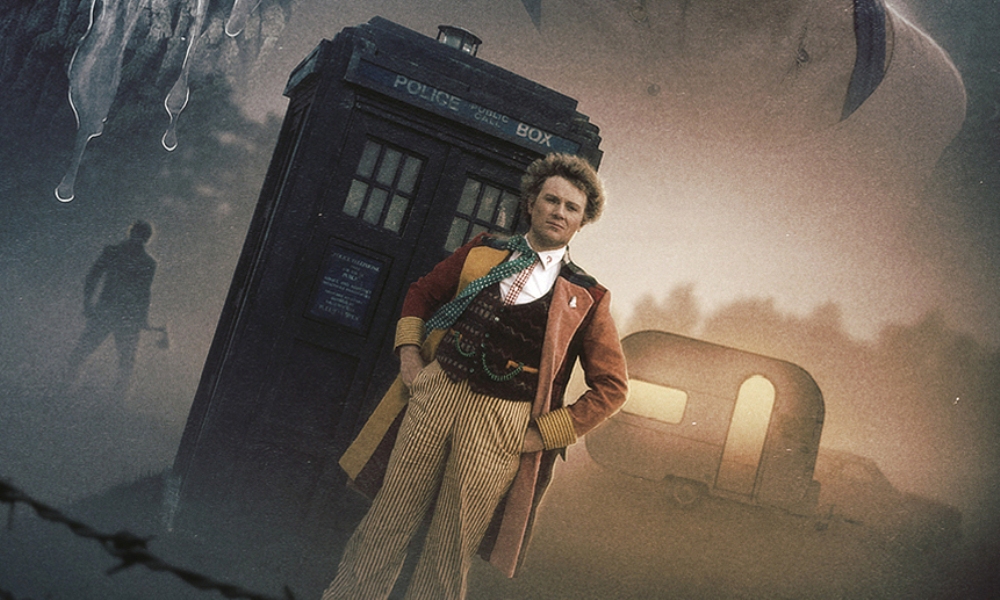 Static brings Big Finish’s latest trilogy featuring the Sixth Doctor, Constance, and Flip to a close. After a pure historical and a sci-fi adventure, Static takes this team to twentieth-century England for a go at a horror story. At a caravan site in the middle of nowhere, there are strange voices to be heard in the static…

Static is a solid adventure oozing with atmosphere, another success for this TARDIS team

Horror in Doctor Who is always a bit tricky. Horror thrives off the unexplained and the inexplicable — but even though its science trappings are, well, trappings at best, Doctor Who is science-fiction in that the show always feels compelled to explain things, and once the explanations start rolling in, it can’t quite do the Sapphire & Steel thing anymore. The best Doctor Who horror stories turn this into a virtue: The Chimes of Midnight, for example, explains its horror, but it’s an emotional explanation, so what was a horror story suddenly becomes a focus on the emotional life of Charley Pollard, and any story that relies on my empathy with India Fisher is of course a good one. The worst ones flounder on dull technobabble in the final act.

Static has a solid couple of opening episodes. Joe Kraemer and Josh Arakelian’s sound design isn’t as creepy as the stuff in, say, Chimes or Scherzo, but I don’t know that it’s supposed to be. The atmosphere of the dreary caravan site is well-depicted, and the slow unspooling of what’s going on in the story is handled well — I appreciate that things you think seem obvious in fact turn out to be untrue, thanks to some deft subversions by Jonathan Morris. Director Jamie Anderson’s casting is also on point; Pippa Nixon and Jo Woodcock are in particular both very good at sounding like ordinary people caught up in inexplicable events, giving their characters real emotional grounding. And this gives something for the TARDIS team to react to, in particular Flip, who always does well in grounded interactions with other characters, sort of Billie-Piper-as-Rose style.

In Part Three, things kind of swerve, and it becomes a very different kind of story. The explanations start coming in, but Morris’s script plays with those explanations. The story just doesn’t offer them, but extrapolates from them — if this is what’s happening, how could someone use or exploit it? It actually turns out to be quite clever, and even though I was suddenly listening to a different story than I had been before, I was enjoying it, just in a different way. So in my posited spectrum of explanations-in-Doctor-Who-horror-stories above, Static falls in the middle. Not as good as The Chimes of Midnight, but not really putting a foot wrong, either.

It maybe does get a bit too sci-fi and a bit too glib (the Doctor does something kind of awful that everyone acts like isn’t awful) in Part Four, but beyond that, Static is a solid adventure oozing with atmosphere, another success for this TARDIS team. I see they’re not on the schedule for 2018, and I know the monthly range is switching up producers and script editors, but I hope we hear from this team more in 2019 and beyond…