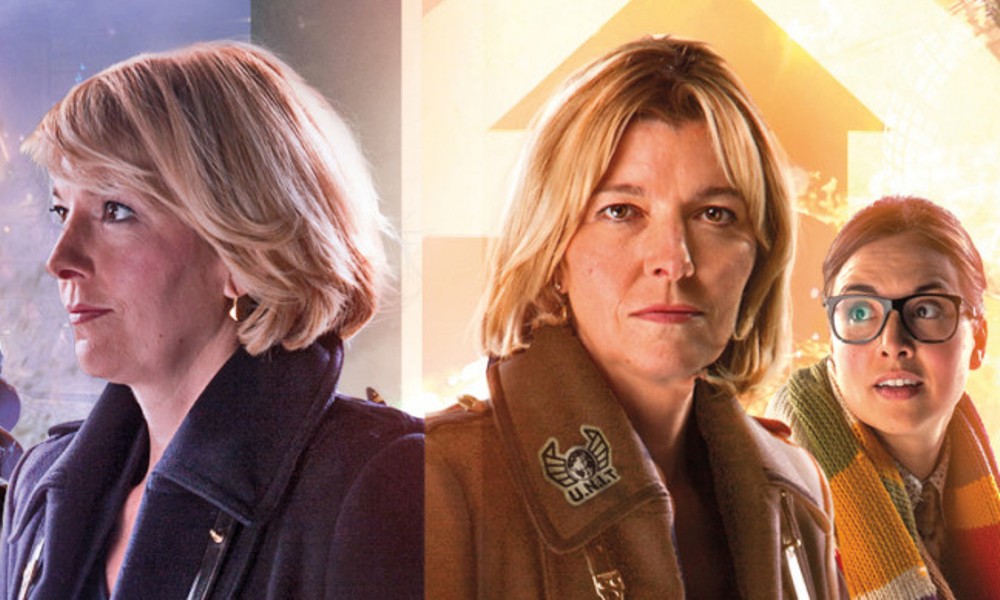 Producer David Richardson and script editor Matt Fitton must have had a brainstorm, because two of their ranges made the same move at the same time: just like the last two series of Survivors, the newest UNIT box set is not one big story in four parts, but four standalone adventures. UNIT: Encounters is more episodic than its predecessors, with distinct adventures for Kate Stewart’s UNIT crew, most of them drawing on the past of Doctor Who in general and UNIT as an organisation in particular.

Matt Fitton writes the opener, The Dalek Transaction, where Kate, Osgood, Josh, and Shindi go undercover as mercenaries in Central America to recover a piece of alien tech that turns out to be a Dalek from a group of guerrillas. (“International troubleshooter” Sam Bishop is completely absent from this adventure that entirely features international troubleshooting; I get that real-world considerations make it difficult to consistently get Warren Brown in, but at this point it feels like the character is absent more than he is present.) It’s an okay story, obviously trying to turn on the guile of a single Dalek, but I didn’t find the Dalek or the guerrillas very suspenseful threats in execution. It seems like the infiltration aspect could have been played up for more tension than it was. Also the continuity issues kept niggling at me, which is unfair I know, but the story seemed to indicate that only Shindi (as an old UNIT veteran) had any real experience with the Daleks, but surely everyone in this set lived through the Dalek invasion of Earth in The Stolen Earth? Or was that erased by a crack in time as indicated in The Big Bang?

Invocation by Roy Gill is a departure for the Big Finish UNIT series, which has tended to emphasise invasions and big action; it’s essentially a haunted house story through a sci-fi filter. Though the story depends a little bit too much on coincidence (Kate happens to go to an old house owned by UNIT at the same time an old satellite is reactivated, and these things turn out to be linked), I enjoyed it. It’s nice to hear Jemma Redgrave do something other than bark orders, and Lucy Fleming puts in an excellent guest performance as the crusty old caretaker of the country home, as does Matthew Cottle as her son. In some ways it’s predictable, but it has some nice touches (Osgood and Josh both also get some good low-key moments), has some good jokes, and makes for a different sort of story than we usually get.

Andrew Smith’s The Sontaran Ordeal reminds me of Dalek Transaction in that it has a decent idea that doesn’t come off as interesting in execution. UNIT has to team up with Sontarans to rescue a downed Sontaran from evil humans, and neither side trusts the other given their battles in The Sontaran Stratagem/The Poison Sky. But the story doesn’t really get much out of this forced cooperation; I wish we’d either gotten more insight into the Sontarans, or more into Shindi (who I’ve really warmed to; Ramon Tikaram has an excellent voice), but it’s all pretty by-the-numbers action stuff.

John Dorney’s False Negative is the set’s final story, and best, though I wish I hadn’t read any of the prepublicity or even looked at the cover, because I think it would have been even better if I had known as little as the characters. Suffice it to say that I laughed hard several times; this one just focuses on the core UNIT cast of Kate, Josh, Shindi, and Osgood, and that combination really sparks here, showing how much affection I’ve developed for these characters since their debuts in Extinction. Ingrid Oliver and James Joyce in particular get a lot to do, and show off sides of themselves not normally heard in this series, and John Dorney puts some fun spins on some old tropes.

No UNIT set has really wowed me yet, but this is one of the better ones; as long as Big Finish resists its inclination to do big action set pieces, this range usually shines. Focusing in on smaller adventures, as it did in Survivors, pays off in giving us a set of stories that add up to something greater.