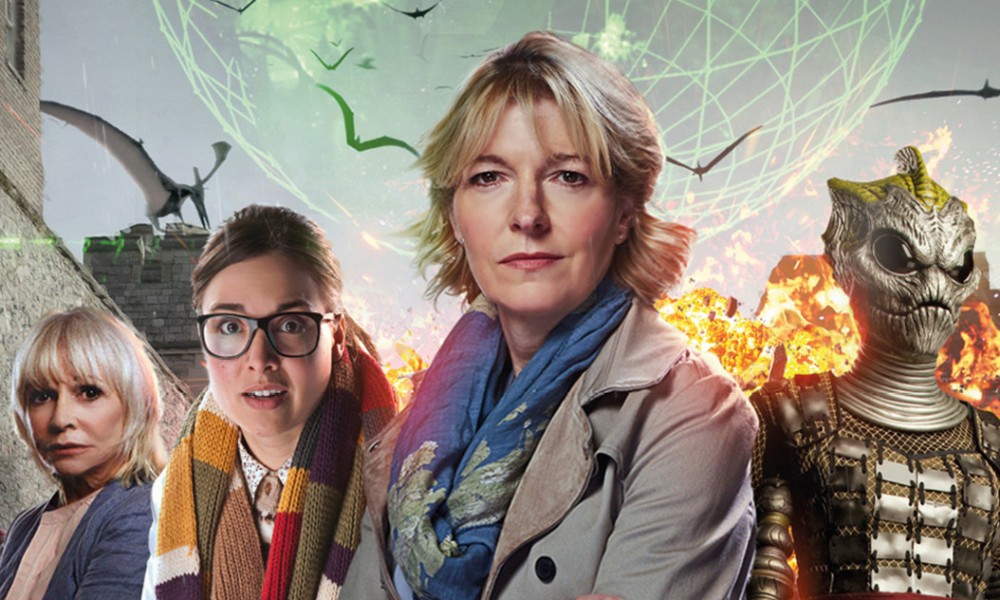 I wrote in my review of UNIT: Silenced that Big Finish’s take on UNIT seems to work best when character-focused, and least well when action-focused. The former plays to the strengths of audio; the latter not so much. The next UNIT set, Assembled, promises character fireworks ahoy by uniting the new UNIT — Kate Stewart, Osgood, Captain Carter, Sam “International Troubleshooter” Bishop — with the surviving members of the old — Jo Jones née Grant, Captain Mike Yates, the erstwhile Sergeant Benton. It’s at its best when playing with the character elements, less so when emphasising the action sequences.

It’s at its best when playing with the character elements, less so when emphasising the action sequences

The set opens with John Benton closing down his pub one last time; a host of old comrades have come to see him off. Unfortunately, so have UNIT and an army of reawakened Silurians. The belaboured contortions necessary to justify this coincidence aside (honestly, the story overexplains it; less would have been more on the exposition front), this is decent fun. On the extras, writer Matt Fitton calls it a “pub under siege” story, and that’s exactly what it is. Kate, Osgood, Mike, and Benton must team up and use the wits and resources of UNIT past and present to overcome the reptilian threat. It’s a simple story, but an effective one, with some fun moments.

The best story in the set is the second one, which unites Jo Jones with Osgood for a mission off on their own. Though some of the other UNIT regulars play a role, the focus is on UNIT’s current scientific advisor and its original scientific advisor’s assistant being teamed up. Katy Manning is always excellent value as Jo, but this is one of her best turns in the role, as writer Guy Adams plays up her wacky environmentalist credentials from Death of the Doctor to good effect — fangirl Osgood wants to know as much as Jo can tell her, but it’s unclear what stories Osgood actually should believe! Though there are some action sequences, the focus of this one is on Jo’s attempt to find another way of dealing with the Sea Devils than combat. Ingrid Oliver is always fun as Osgood, but here we get her at her fangirliest while also being supremely competent.

I found the last two stories in the set less impressive. The third sends Kate and Osgood into a Silurian base in what turns out to be a pretty action-focused labyrinth story, which doesn’t play to the medium’s strengths; the finale is the typical Big Finish UNIT action bash. The former doesn’t have any of the old UNIT characters in it; the latter is too much of an action extravaganza to let them shine. After the strength of the first couple episodes, it would have been nice to hear something more character-driven, maybe with Kate’s “science leads” approach bumping up against that of her father’s old military subordinates.

Katy Manning is always excellent value as Jo, but this is one of her best turns in the role

I already praised Manning and Oliver; John Levene (Benton), Richard Franklin (Yates), James Joyce (Carter), and Warren Brown (Bishop) also get to do their things here, each gaining a nice moment or two across the set. The one perspective that feels lost in this set is of UNIT’s own leader: Kate is a focal character in the first and third episodes, but largely offstage in the second and fourth. I really like Jemma Redgrave in her television appearances, but on audio, it feels like Big Finish just don’t give her interesting things to do. She’s spellbinding in The Zygon Invasion/Inversion; less so here.

I was a little disappointed with the Silurians themselves. They’re one of Doctor Who’s potentially most complicated monsters, but Fitton and Adams’s story strips them of all complications, with a maniacal nativist leader and a bloodthirsty subordinate. Following the lead of the TV programme, which has cast Neve McIntosh as three different Silurians, Assembled casts her as a fourth (presumably this character is part of the same gene chain as Vastra and company). It also recasts The Hungry Earth/Cold Blood’s Richard Hope as a different Silurian leader. McIntosh and Hope are both strong actors, but the one-dimensional villainous Silurians in this set don’t give them much impressive to do.

After Silenced, I was hopeful that the new UNIT stories would play to the format’s strengths. Assembled is at its best when it does that, with the collision of UNIT new and old, but it doesn’t do it quite as much as it should.

(There are some brief mentions of other eras’ UNIT personnel — though I wouldn’t like to see Big Finish dip into this well too much, it would be nice to have some other pre-established UNIT characters pop up for an episode or so when appropriate. What have Klein, or Captain Magambo, or Brigadier Bambera, or the forgotten UNIT team from Big Finish’s mid-2000 series, been up to?)