Big Finish Classics: The First Men in the Moon review 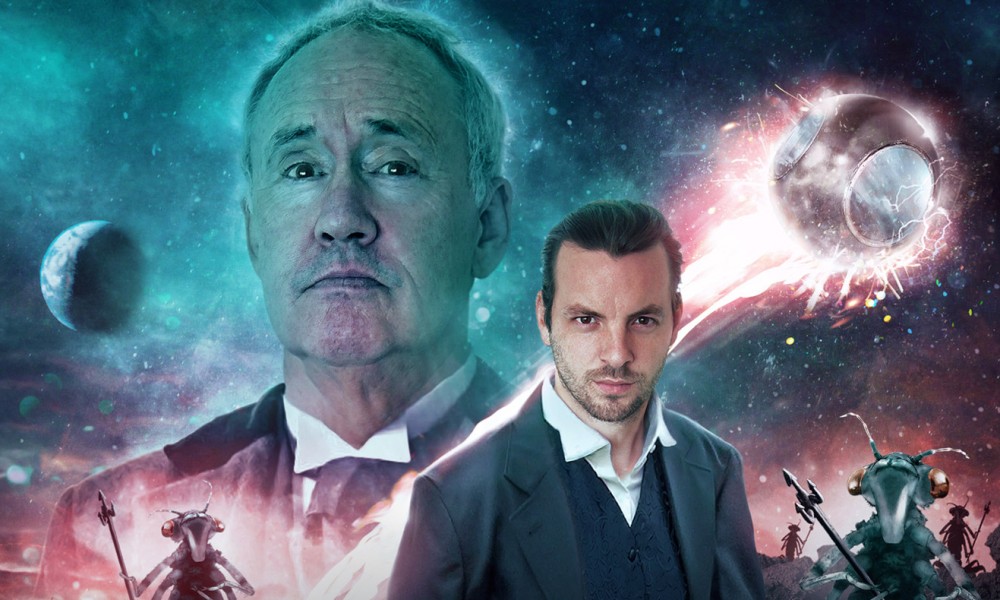 The First Men in the Moon is actually the only one of Big Finish Classics’s H.G. Wells releases based on a scientific romance I haven’t read, but based on this dramatisation of it, I had better get to reading it as soon as possible. I can’t comment on any perceived level of faithfulness (though I suspect that, like in his The Invisible Man, Jonathan Barnes has beefed up and altered the frame narrative, because it does some kind of un-Wellsian things), but I can comment that Big Finish has produced a cracking adventure narrative.

This is a bouncy little slice of Victorian space adventure

Outside of the script itself, this is really down to the casting of Nigel Planer and Gethin Anthony, so kudos to both them and director Lisa Bowerman. Anthony plays Bedford, a young man easily charmed by a pretty smile, but even more charmed by money, whose poor investment decisions see him taking refuge in the country. Anthony grasps the essential humour of the part, keeping Bedford likeable while he can’t stop himself from envisioning the economic implications of each new discovery. Anthony is also a very capable narrator, keeping the events of the story lively and entertaining and humorous. (Wells wrote some pretty dour books, but judging by the adaptation, The First Men in the Moon was not one of them.) Planer plays Professor Cavor, the eccentric Victorian*Victorian-ish, anyway. The First Men in the Moon was serialised from December 1900 to August 1901; Queen Victoria died in January 1901. man of science experimenting on gravity. Planer’s performance is an utter delight, an abstracted, dotty, naïve but fundamentally virtuous man just trying to do his science without all the bothersome practicalities getting in the way.

And together, they make a wonderful double-act. My favourite part is their interplanetary journey itself; Cavor brings the complete works of Shakepseare and discovers that maybe he really does have something interesting to say, while Bedford doesn’t think to grab anything other than a single issue of the not-exactly-highbrow periodical Tit-Bits. They’re both good, but Planer especially is just a joy to listen to. After finishing this (but before the First Doctor Adventures news broke), I determined that if Big Finish did insist on recasting William Hartnell’s original Doctor Who, they could do a lot worse than going for Nigel Planer. (She doesn’t do a whole lot, but I also enjoyed Chloe Pirrie’s performance; she’s one of those actresses who can be flirtatious and sexy just with her voice, which is exactly what’s called for here. I hope she gets a bigger role in some future Big Finish.)

The story itself is a pretty simple one: Cavor and Bedford build a spaceship, Cavor and Bedford go to the Moon, Cavor and Bedford are captured by aliens and must escape. (Knowing Wells, I suspect some political/social commentary has been omitted, but Barnes still gets some in when Cavor attempts to explain problems of militarism to the inhabitants of the Moon, the Selenites.) But the story is largely an excuse for a story in two contrasting late Victorian types, the abstracted man of science and the aggressive capitalist, as well as some intriguing alien visuals, which are well-rendered on audio, Peter Doggart acquitting himself satisfactorily on sound design and music. Wells must have been one of the first to write a scene where astronauts in low-G conditions are delighted to discover how much they can bounce, but in the intervening century we’ve surely seen that a hundred times. But here it’s as fresh and as delightful as ever.

In what is a set of releases with many strengths, The First Men in the Moon is one of the strongest. Whether you’ve read H.G. Wells’s original novel or not, this is a bouncy little slice of Victorian space adventure.