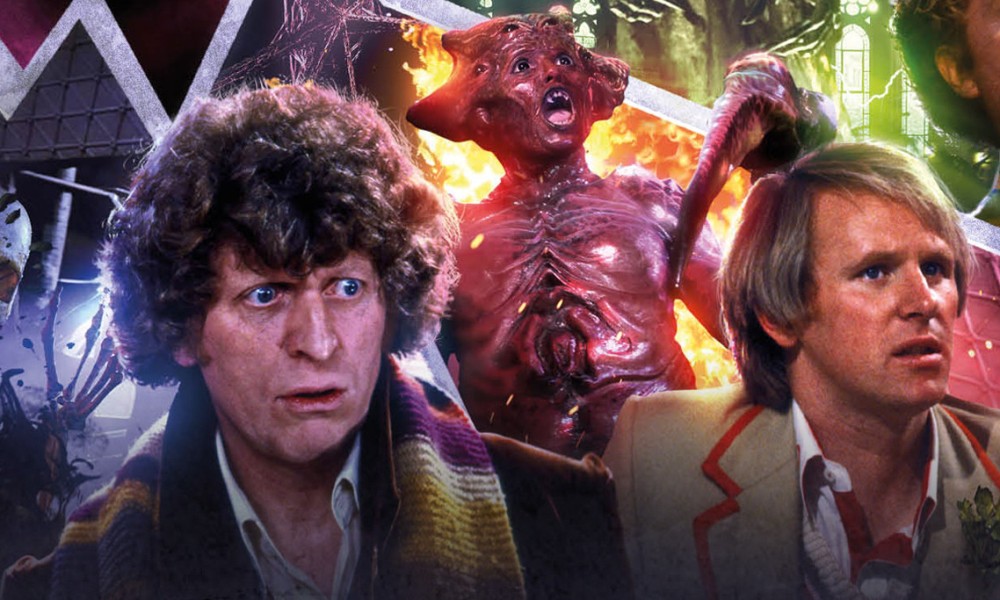 Despite how much I enjoyed the first set, I found this one lacklustre

The two Vashta Nerada stories are lightly linked: the Fourth Doctor visits a funfair world taken over by the swarm in Night of the Vashta Nerada by John Dorney, and the Eighth Doctor visits a research station experimenting on leftovers from that same world in Matt Fitton’s Day of the Vashta Nerada. Both of these stories are very much survival thrillers in the Jurassic Park mould (or Voyage of the Damned, if you want something a little more Doctor Who-y): the Doctor must help a group of people survive a terrible situation while trying to escape. Both are pretty simple as a result, which is both a strength and a weakness. They’re tight and focused, but it doesn’t always feel like there’s much there, especially when it comes to the guest characters in Night. Dorney can do great character work, and Barnaby Edwards great casting, but the guest characters in this story feel like flat archetypes: a corporate tycoon, a macho mercenary, a timid telepath, a stolid alien, and, uh, another guy. This makes it hard to care as their numbers are inevitable whittled down by malevolent forces.

It’s kind of interesting that we have two Vashta Nerada stories in this set, because arguably we’ve never had any before: in Silence in the Library/Forest of the Dead, the Vashta Nerada almost come across as incidental elements next to data ghosts and virtual realities and portents of the Doctor’s future. I don’t know that these are the definitive Vashta Nerada stories, though. Like a lot of clever Steven Moffat monsters, they’re perfectly suited to television: the you-suddenly-have-another-shadow gag just doesn’t work on audio when someone has to say it, as opposed to video where you suddenly pick up on a visual element that’s subtly been there all along. And the Vashta Nerada aren’t exactly talkative, either. Silence in the Library might not be the definitive Vashta Nerada story, but nothing in these two tales is as scary as what happens in that one, no matter how many weird permutations of the basic Vashta Nerada Matt Fitton piles into his story.

Still, they have their moments. The climax of Day is particularly good, and an appearance of Cardinal Ollistra from The War Doctor is always welcome (though her and the Doctor seem a little more familiar than I would expect given the events of Doom Coalition 4).

Empire of the Racnoss brings back the giant alien spiders of The Runaway Bride, here played to over-the-top proportions by a range of actors, including Martha’s mum Adjoa Andoh. Scott Handcock’s story thrusts the Fifth Doctor right into things, and takes an unexpected approach: the Doctor stumbles into a battle from early Time Lord history, when his people’s ancestors were exterminating the Racnoss (as alluded to in The Runaway Bride). I appreciate the fleshing out of this scenario, as it makes for a very unusual set-up for a Fifth Doctor tale, but one that also suits his typical characterisation: here he’s trying very hard to do the right thing, but neither side will let him. Despite a promising start, though, the story soon gets tiring to listen to, as there are long scenes with multiple Racnoss characters delivering dialogue, which is a real strain to listen to, meaning I started to lose track of the story. It’s no Professor Bernice Summerfield and the Poison Seas, but it did strongly diminish my enjoyment from a very compelling beginning. Nigel Planer and Lisa Kay were both good as two Time Lord soldiers, too.

Simon Guerrier’s The Carrionite Curse feels like a first draft that never got rewritten. It has real high points — such as a delightful performance by Maya Sondhi as temporary companion Katy Bell — but there are a lot of things jumbled in here that never really add up. Guerrier picks up on the words-as-power idea from The Shakespeare Code, but it comes across as arbitrary magic: why are the Carrionites harmed when the Doctor says random interesting words? It makes more sense when this is linked to ideas of words as what J.L. Austin might call “performative utterances”: people who are empowered to do things with their words can use them against the Carrionites. Such as when the leader of the village council commands the Carrionites to reveal themselves, they must obey. There’s some good potential for both comedy and cleverness in that, but it feels drowned out in the sea of other things Guerrier does with the Carrionites here. Why is there no reckoning to a group of characters trying to hold a witch-burning in the 1980s? It’s a real hodgepodge. I liked the use of Professor George Litefoot’s memoirs (a surprisingly timely tribute), but the less successful reprise of what was a good joke in The Unicorn and the Wasp just made me scratch my head. This one was okay, but it ought to have been great.

Finally, a sort of meta-comment: I praised the first set for bringing some of the storytelling qualities of the “new series” to the old, but this set adopts a particular storytelling trope of the new series to excess — I think it factors into the climax of three of the four stories! It beings to make it all a little too predictable, and cheapens its power.

So despite how much I enjoyed the first set, I found this one lacklustre, unfortunately. I think this will be the last one, and I’m not sorry, because I wonder how much of that is because the number of monsters from the new show with good potential for return appearances has already been exhausted. (Except: where’s my Slitheen audio, Big Finish? You know you want it!)