Torchwood: Aliens Among Us 1 review 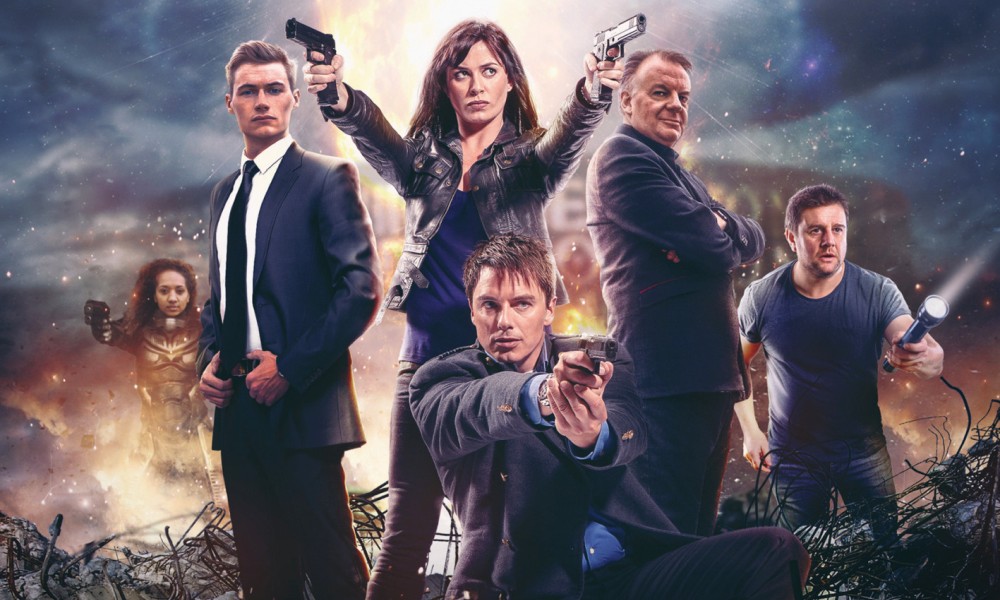 Six years after Miracle Day, I think we have to admit that no matter how much John Barrowman might want it, Torchwood is not coming back to television. Thankfully, Big Finish is here to step into the gap with an audio take on Series Five, in the form of three four-episode box sets, giving us a series very nearly as long as the Torchwood of old.

The classic characters are doing their thing, and the new characters intrigue with future possibilities

Like Series Three and Four on television, Series Five is one long story with a subtitle: in this case Aliens Among Us. Torchwood is back in Cardiff, reestablished to a degree following its catastrophic encounters in Children of Earth and Miracle Day. (Some of the ground for this has been laid in the monthly Torchwood range from Big Finish, but there are clearly more gaps that can be filled if that’s where Big Finish want to go.) But it’s not just Torchwood that’s back in Cardiff: after a period of dormancy, the Rift is active again, and there are aliens among us.

Aliens Among Us may be somewhat reminiscent of the approach of Series Three and Four, with its umbrella title, but it’s not a tightly woven story like those two series were (which worked for Children of Earth but definitely did not for Miracle Day). The four stories in Aliens Among Us 1 share a common set-up of aliens having infiltrated various levels of Cardiff society during an apparent terrorist and/or refugee crisis, but the writer of each individual story tells their own tale set against that backdrop, focusing on different characters and different themes.

I want to try something a little bit different here, so I will tackle the set’s main characters in turn (in order of billing on the cover), and then its episodes. Beware there are some major twists in this story, which I will do my best to talk my way around, but there may be some unavoidable minor spoilers.

What can you say about Captain Jack? Last we heard from him he was somewhere out in space fighting the Committee (in Forgotten Lives); now he’s back on Earth, joining Gwen in her reestablished Torchwood. John Barrowman will always be John Barrowman, and Jack Harkness will always be Jack Harkness. We see multiple sides of him across this set’s four episodes. In Episode One, Changes Everything, when a civilian is killed, he snaps at the man responsible (a potential Torchwood recruit), telling him Torchwood’s not like that anymore. But both before and after this he flirts with and sleeps with this man: just because he can’t join Torchwood doesn’t mean he can’t have a bit of fun. Yet in Episode Three, we find Jack at his most tender, soothing a bereaved alien widow, and flirting like mad to cover up the dark pain he’s still hiding inside. On television, you could definitely accuse Torchwood of losing track of the fun side that made Jack Jack on Doctor Who, but the writers and Barrowman here have got the balance right. Dark things have happened in his past, but he’s still having fun.

Look, I have to make a confession here. Though he’s had a number of great turns on audio by this point, Ianto Jones never did much for me. The idea of him as the hyper-competent dogsbody lurking in the background of Torchwood Three never quite came off. All this is to say that he seems to have been replaced by a new hyper-competent dogsbody, and Paul Clayton’s Mr Colchester is probably my new favourite Torchwood character. Grouchy and older than all these youths and distrustful of Jack, he grumbles his way through the set, saving the day with his common sense. Episode Two, Aliens & Sex & Chips & Gravy, is definitely his shining hour in the set, but he’s a great presence throughout. He gets a wonderful laugh-out-loud moment in Episode One, too, when he’s confronted by newbie Tyler Steele for his old-fashioned attitudes. I hope that we don’t just get more of him in Aliens Among Us (and beyond?) but that he also migrates into the monthly standalone releases.

It’s difficult to talk about Alexandria Riley’s character without spoilers, but she does a good job. Almost too good a job, if you ask me. Is it possible that all Welsh women sound the same to my American ears? But on the whole I was impressed with how she handled a difficult job, and I look forward to knowing more about Ng.

Russell T Davies’s Doctor Who universe first episodes (i.e., Rose, Everything Changes, Invasion of the Bane, Smith and Jones) all have a certain sort of structure about them. An uninitiated character is brought into the world of the fantastic, rejects it briefly, and then dives in headfirst. Rose, Gwen, Maria, and Martha all take similar journeys in their first appearances. Now it’s Tyler Steele’s turn. He’s a little different than all those idealistic girls/young women, though: his past is sleazy to say the least, a reporter on the outs thanks to some phone-hacking scandals. Jonny Green makes him hard to like at times, but that’s obviously the point: James Goss (as writer of Changes Everything, his first appearance) is flipping around the typical RTD introduction model and deconstructing it in some interesting ways. He’s funny enough, but his charm is a little insincere, and I’m curious to see what’s done with him in the long run.

Sam Béart’s role is another one it’s hard to say a lot about without giving stuff away. But suffice it to say that she does a good job thus far, and her character could potentially be a vehicle for interesting future stories.

Surprising, Rhys isn’t in this a whole lot, just a small role in one episode. Good old Rhys, you deserve better.

Gwen is the heart and soul of Torchwood, and she gets a lot to do in this set: initiating Tyler Steele into Torchwood (essentially taking over Captain Jack’s role from Everything Changes), going out on the town with Mr Colchester in Aliens & Sex & Chips & Gravy, and dealing with some personal trauma in her own prickly way in Episode Three. In some ways, she’s as Gwen as ever, and in some ways she’s changed a lot since we last heard from her. (Made You Look was her chronologically latest appearance, I think.) I look forward to hearing how and why Gwen ended up how she is.

Changes Everything by James Goss

I’ve kind of alluded to this already, but Goss’s script for the first episode takes the classic RTD introductory story and flips it on its head. Which it would kind of have to, because this story isn’t for people who don’t already know Torchwood; it can play with the formula more. We hear Gwen and Jack from the outside. To us, they’re old friends, but who are they to Tyler Steele? And what is he to them? Torchwood’s tie-ins have established James Goss as one of the series’s best writers, and Changes Everything continues that streak, perfectly mixing the daft and the dark. The Torchwood SUV was always kind of dumb; the Torchwood Smart Car being pursued by flying drones is all kinds of perfect.

This was probably my favourite episode in the set: if you want the daft and the dark, Torchwood doing an alien hen night is it! Like I said in my introduction, the format of Aliens Among Us allows for the placement of standalone adventures on a larger canvas, and A&S&C&G shows us that formula at its best. You could imagine Torchwood doing an alien hen night during its first two series, but the ongoing story gives it a little bit more weight, as we slowly learn more about the alien presence in Torchwood at the same time that Gwen has to keep an alien princess from nicking alcohol from the off-licence. It’s also got some of the best Mr Colchester material in the whole set. Still, it’s as goofy as all get-out — and dark. Torchwood’s weird mixture never quite clicked for me on TV, but if more of Series One and Two had been like this, it might have.

Torchwood — specifically Jack and Tyler — have to protect an alien widow from her own people. This one definitely has its high points, like Sam Béart as the title character, and Jack’s secrets coming to the surface. Actually, everyone in the main cast gets a nice little moment at one point or another. It’s only let down by the plotting; it’s a full 60 minutes, and in the middle it kind of flags, making you think ten minutes could have been cut out to keep things moving more briskly.

This story feels the most classic Torchwood: there’s a strange new alien hotel in Cardiff whose guests keep dying, so the team has to go undercover to investigate. Gwen and Colchester are cleaning service, and Jack is (of course) a bartender with a speciality cocktail named after himself. (“Everything’s better with a little Harkness inside you”!) Maybe because of how old-school it was, this was the weakest story for me. There’s a very obvious twist that it doesn’t make much sense for the characters to not catch onto, and there were also some confusing scenes where I wasn’t sure what was going on. Like all the stories in the set, though, it’s got its moments (one particularly brilliant one with an alien hotel manager and a human hotel worker), and some of the new characters really get to show what they’re made of.

Scott Handcock is one of Big Finish’s better directors, and Steve Foxon one of its better sound designers, and between them, they create a perfect soundscape for this adventure, which by its nature has to feel more grounded than your typical Doctor Who release from Big Finish. Blair Mowat continues to do great things on music, and I appreciated the inclusion of a couple classic Ben Foster Torchwood tracks.

If Torchwood on TV had been like Aliens Among Us all along, I think I’d’ve been a bigger fan

I know that in some ways I’m not the target audience for this. I’ve always found Torchwood on television a mixed bag. Series One had some great parts (They Keep Killing Suzie, Out of Time, Captain Jack Harkness) and some awful parts (Day One, Cyberwoman, Countrycide, Random Shoes), while Series Two was more middling, to its detriment. Children of Earth was an all-out classic of television, but Miracle Day was largely… not. But if Torchwood on TV had been like Aliens Among Us all along, I think I’d’ve been a bigger fan. The classic characters are doing their thing as good as ever, and the new characters fit right in and intrigue with future possibilities. This might be the platonic ideal of Torchwood. If you’d told me how into it I’d be back in 2006, I don’t think I’d’ve believed you, but here we are 11 years later, and Big Finish is giving us the Torchwood we deserved all along.