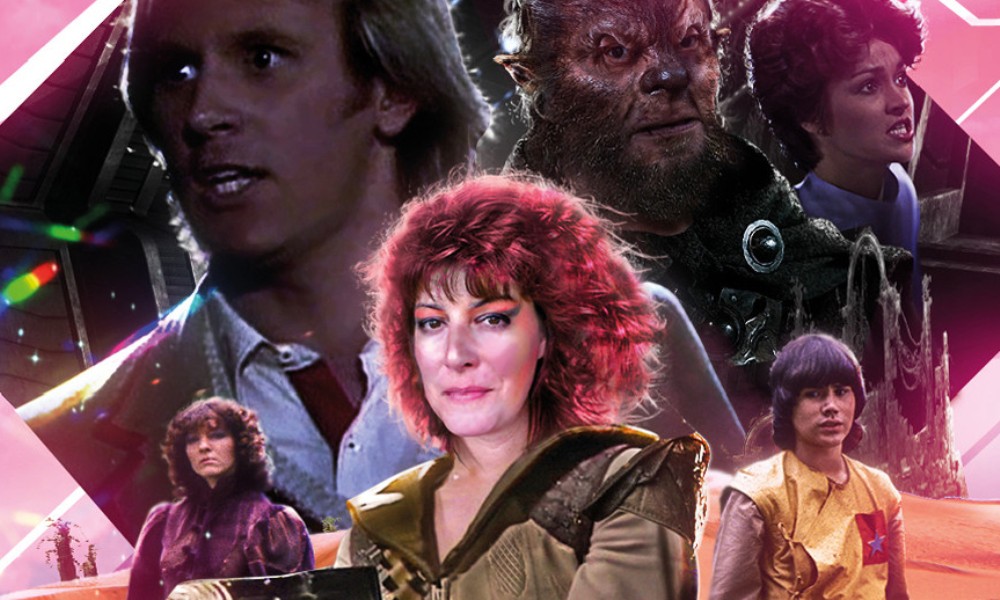 I occasionally inveigh against nostalgia here (mostly when I think it’s responsible for giving us things like Zygon Hunt), but I have to admit that when you balance the nostalgia right, it makes for an enjoyable take on Doctor Who. Zaltys wraps up this year’s Fifth Doctor trilogy, and I have to say, it balances itself out with just the right kind of 1980s touches. With space pirates and people being teleported out of the TARDIS, it would remind you of Terminus even before you get to the fact that on the cover Rebecca Root has been photoshopped into Liza Goddard’s outfit from the same. The planet Zaltys itself is said to look like Thoros Beta from The Trial of a Time Lord, and the alien race here has a delightful bafflegab name that sounds like it flowed right out of the pen of a desperate Christopher Hamilton Bidmead, keen to make a nonsensical plot sound like it had at least some scientific merit. Plus it’s a sequel to a Third Doctor story that never actually happened, and I never thought I’d say I enjoyed something that reminded me of Timelash in some regard.

We even get in our requisite TARDIS crew squabbling. Though, to be honest, I could always do with more of this: Zaltys splits all four characters up for most of its runtime, except at the beginning and the end of the adventure. Give me Adric and Tegan having to work together for two hours, that’ll be entertaining! But even so, the story makes good use of all four of them, especially Tegan, who gets to demonstrate how smart and capable and brave she is when she’s isolated and hunted.

It’s well-cast, too (though would we expect anything less from Barnaby Edwards?). Rebecca Root’s Sable balances perfectly cynical self-interest and snarkiness — this isn’t a space pirate who instantly becomes a nice person on falling in with the Doctor and company, but she’s not an out-and-out baddie, either. Philip Franks also impresses as Gevaudan, and Niamh Cusack does a great villain as Clarimonde. And it all sounds great, too; Steve Foxon is one of Big Finish’s best sound designers, and I think he’s even better when emulating the 1980s music, giving the whole production the right atmosphere of morose electronic doom.

Nostalgia can, though, still be a weakness, and Zaltys’s principal weakness is one that it shares with many of the 1980s stories it seems to be emulating, such as Terminus: it sure feels like little happens at times. I was never not entertained, but when I paused to reflect at the end of each episode, I often felt like mostly people had sort of wandered around a lot, and that little had actually happened; this is one of those stories where if I explained it back to someone, I’d be hard-pressed to describe enough events to take up two hours’ time. On the other hand, Matthew J. Elliott’s script has some good surprises, including one that completely wrong-footed me.

On the whole, I didn’t love this most recent trilogy, but I did enjoy it. Three good, enjoyable, atmospheric stories featuring one of Doctor Who’s best TARDIS teams, and Zaltys is of a piece. Big Finish could stand to kick it up a notch, but more like this wouldn’t go amiss.