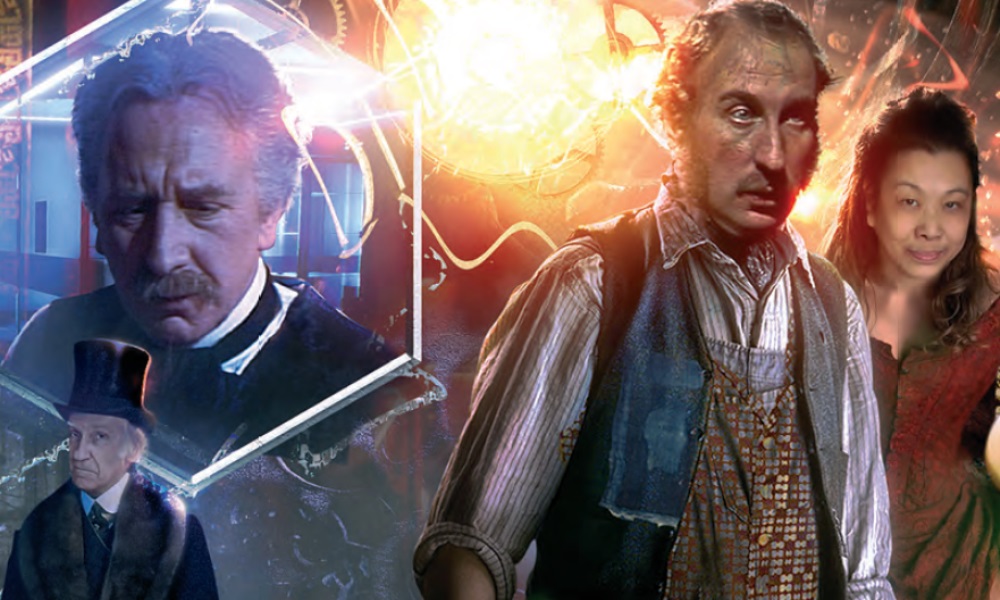 I’ve complained that the last few Jago & Litefoot sets have felt like “Just Another Adventure” for the investigators of infernal incidents, despite attempts at big concepts like the Master coming to Victorian London or Ellie possibly becoming a vampire again. The early series of the range were typified by their refusal to sit still, with visits from Leela and the Sixth Doctor, and trips to the 1960s to ensure that the format never really stabilised — yet it most definitely has stabilised by this point, with (it seems) every set containing two typical adventures, one “offbeat” adventure, and an unsatisfying Justin Richards finale.

Series Thirteen feels like the first genuine upset the range has had since Jago and Litefoot went on the run, and this elevates the individual episodes

Series Thirteen, though, feels like the first genuine upset the range has had Jago and Litefoot went on the run in Series Seven, and this elevates the sometimes patchy individual episodes. I don’t think it’s too much of a spoiler to reveal that this set (it’s revealed in the synopses on the Big Finish site) involves Jago and Litefoot inadvertently travelling into a parallel universe. If there’s a problem with this set as a whole, it’s that the set-up is overly belaboured: they don’t end up in the parallel world until the very last scene of the first story, Paul Morris’s The Stuff of Nightmares, and what leads us there is a bit on the slow side.

I like the idea of the characters experiencing real-seeming hallucinations of their worst nightmares, as the ones Morris comes up with are very apt (Litefoot imagines being a corpse cut up by Jago; Jago imagines being on stage but not having anything to say), but the characters for some reason are slow to suspect a supernatural cause, resulting in some amusing-but-pointless scenes where Litefoot seeks the help of a psychiatrist colleague. The eventual explanation turns out to be bafflegab in the extreme, which makes the climax pretty unsatisfying.

Jonathan Barnes’s Chapel of Night takes a long time to do very little: the first half of the disc feels like it constantly cuts back and forth between Litefoot going, “Gosh, is this our London? I can’t put my finger on it.” and an obviously evil woman giving pompous speeches to homeless people. It’s frustrating because the parallel world is the unique selling point of this set, but Jago and Litefoot don’t actually have it confirmed that they’re in a parallel world until 50% of the way through the box. And the actual plot in play here feels like Jago & Litefoot at its most generic. That said, the day is saved by some very delightful acting from Jago, in a twist I really liked.

As everyone who listens to Jago & Litefoot should expect, the highlight of the set comes from Matthew Sweet’s contribution, How the Other Half Lives. This one follows multiple parallel narratives: our Jago and Litefoot try to survive on the streets of parallel London, the parallel Jago is going Giant Rat-hunting (the Giant Rat having survived this universe’s version of The Talons of Weng-Chiang), and the parallel Litefoot is a lonely man about to fall victim to scam artists. Sweet’s script gives regulars Christopher Benjamin and Trevor Baxter a lot to do in playing two different versions of themselves, and even the originals are put in situations out of their ordinary experiences. This story is a delight from start to finish, with little flourishes such as Jago’s parallel wife and the Giant Rat — Sweet always manages to combine great ideas and detailed characterisation, and does so again here. And, as a Victorianist myself, I always appreciate Dr Sweet’s use of actual Victoriana, in this case some detailed references to Henry Mayhew’s journalism classic London Labour and the London Poor, which Benjamin reads aloud with vigour and enthusiasm.

The parallel world concept adds a little je ne sais quoi to each of the stories that it affects, that thrill of seeing familiar characters in unfamiliar ways

Everything wraps up with Justin Richards’s Too Much Reality, which might be better called Too Many Characters. In addition to our Jago and Litefoot and the Jago and Litefoot of this parallel world, this story also features the investigators of infernal incidents of the parallel London: Luke Betterman (played by David Warner; our world’s Betterman appeared in Series Nine and Ten) and Aubrey (played by Jamie Newall; Jago and Litefoot met an 1890s Aubrey before in Series Nine, and a 1960s Aubrey in Series Five). Plus Inspector Quick! With seven different main characters and a lot of exposition to get out of the way, there’s not much room for a plot complicated enough to warrant seven protagonists. (The story holds back from eight by writing out a principal character from How the Other Half Lives in a ham-handedly obvious fashion.) All our fearsome investigators do is interview some folks, and then resolve the problem almost by accident! The idea is fun, but the execution is not: the lack of characterisation in this story is a marked contrast to the previous one. I loved Aubrey in his previous appearances, but the character here captures none of what I liked about him except for being played by Jamie Newall, he’s just a generic character with the same name, and the same goes for Warner’s Betterman. It feels like a missed opportunity.

If I was to armchair script-edit a bit, I think I’d have gotten Jago and Litefoot to realising they were in a parallel world quicker, basically collapsing The Stuff of Nightmares and Chapel of Night into one story. Then How the Other Half Lives could come second, and the last two stories would have more space to play with the multitude of characters at their disposal, especially doing more with the parallel Aubrey and Betterman.

All that said, I enjoyed this set more than I didn’t — the parallel world concept adds a little je ne sais quoi to each of the stories that it affects, that thrill going all the way back to Star Trek’s Mirror, Mirror or DC Comics’s Crisis on Multiple Earths stories, of seeing familiar characters in unfamiliar ways. The traditional end-of-the-set cliffhanger is a good one, too, and I look forward to Series Fourteen.

(A side note: I was flabbergasted listening to the CD extras to realise that David Richardson is moving on from being the producer of Jago & Litefoot. I don’t mention him much in these reviews, but I think he’s done great work with this range, picking it up from the promise of The Mahogany Murderers and turning it into something special. I know I’ve said things like this before, but who would have thought that on the thirtieth anniversary of The Talons of Weng-Chiang we’d be celebrating by listening to the thirteenth box set of ongoing adventures of two of its side characters? Richardson has done something incredible, and he’ll be missed, no matter how good Ian Atkins is.)