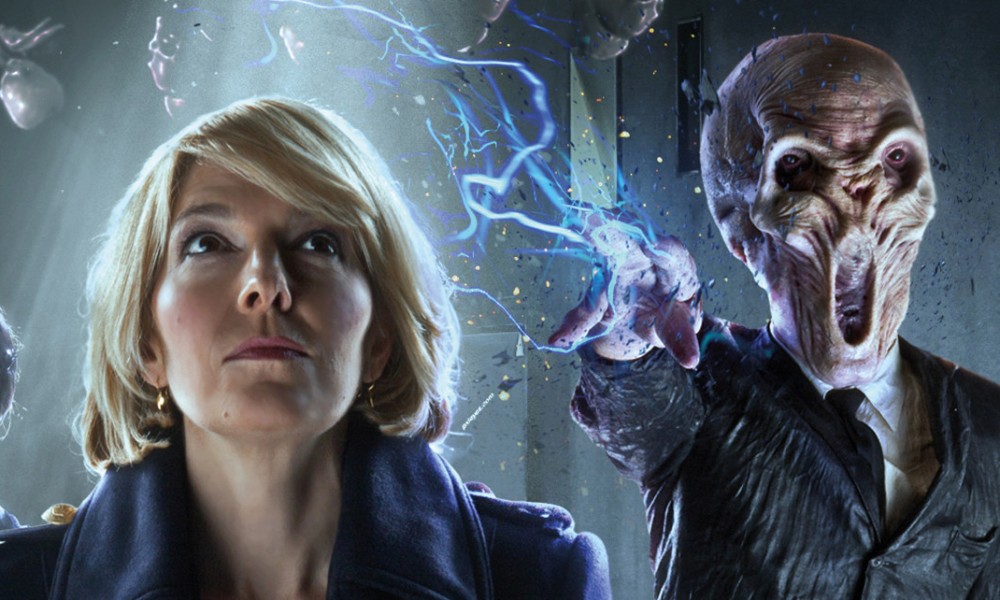 Speaking of how television programmes tend to improve after shonky first seasons, A.V. Club critic Zack Handlen says this is partially down to “the simple fact of accrued character history. First seasons have to struggle a little to get us interested in people, and while that struggle can be exciting, there’s a lot to be said for the simple growth of attachment over time. We make jokes about Stockholm syndrome, but I think it’s more direct, and less creepy, than that; we come to like seeing the same faces. Even if the first season was a mess, all those hours spent watching characters means a certain connection has been built, regardless of the quality of those hours.”

Maybe Big Finish is figuring out these characters better, maybe it’s the Stockholm syndrome, but so help me after a shonky first two box sets, I’m coming to warm up to the cast of Big Finish’s take on UNIT. The third set, Silenced, sees them facing off against the Silents, who featured prominently in a few Matt Smith episodes of Doctor Who, and whose methods — which don’t involve a single gun — play much better to the strengths of audio than the giant action set-pieces with the Autons and Tengobushi of previous volumes.

All five main characters get their moments to shine – so help me, I’m coming to like them

In the way that good tie-in fiction often does, Matt Fitton and John Dorney’s story picks up some forgotten threads from The Impossible Astronaut and Day of the Moon: what did the Silents do after humans the world over began to kill them all on sight on orders from the Doctor? It’s taken over 40 years for the survivors to come together and regroup, and finally they can put their plan into motion.

Most of the stories here are more about suspense than combat, playing to the strengths of the small cast size and immersive quality of audio drama. Throughout the episodes of this set, UNIT investigate a house where no-one comes out, mysterious shifts in politics, a space mission gone wrong, and clues that no-one other than themselves could have left. Though it’s rare that all five main characters (Kate Stewart, Osgood, Captain Carter, Lieutenant Bishop, and Colonel Shindi) share a scene, they work together throughout the set in various permutations, and they all get their moments to shine. So help me, I’m coming to like them — even “international troubleshooter” Sam Bishop seems to have a point these days.

The Silents have a cool concept behind them, and it’s one that plays out well on audio: the way they enact their plan here is pretty clever, and the array of sounds the television programme built up for them, especially their creepy voice (here enacted by Nicholas Briggs), is well recreated by sound designers Peter Doggart and Howard Carter. The show, as it so often did, ran on from the Silence to the next big thing, and though you shouldn’t come here looking for answers to Series Six’s unanswered questions (why did the Silence need an Apollo spacesuit to make River Song shoot the Doctor?), this set does follow up on many aspects of the Silents the programme never really cared about again.

There are times the memory-loss gimmick gets a little tiring (Episode Two definitely has some good parts, but there are others that feel like their retreading old ground), but for the most part, it’s used as the basis for some effective tension and some effective comedy. The way Episode Four opens up with UNIT up to seemingly entirely unrelated business, having forgot about what the Silents did in the first three discs, is particularly effective, as in this case, the listener is mostly at the same level of knowledge as the characters. The memory thing also means that we have four mostly distinct stories here, more like a Doom Coalition set than the previous UNIT ones. Given most stories Big Finish comes up with don’t really merit four hours of run time, this is a definite improvement.

The cast clicks in this one — like I said above, everyone has their moment, from Jemma Redgrave as Kate Stewart finally getting to demonstrate her scientific mind to Ramon Tikaram as Colonel Shindi chafing on surveillance duty, from James Joyce as Captain Carter turning out to be the kind of guy who would vote for Donald Trump to Ingrid Oliver as Osgood getting to go on a jaunt in space. In addition to the main cast (if indeed that’s what it is), Tracey Wiles returns as Jacqui McGee, ace reporter, in a role that sees her ties to UNIT tightening. There aren’t a lot of other meaningful guest parts in this set, except for Nicholas Day as populist demagogue Kenneth LeBlanc, who manages to perfectly balance humour with characterisation — almost too well, perhaps, given what’s happened in the real world since this set has come out.

Maybe it’s the Stockholm syndrome, but who cares? As long as Big Finish can learn the lessons of Silenced, UNIT may finally be taking off.