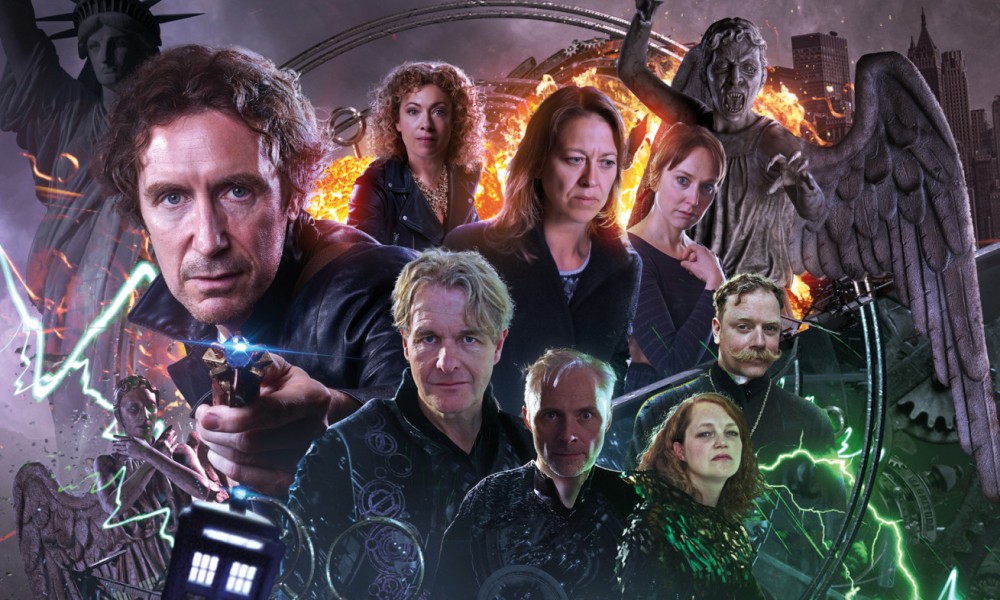 The Eighth Doctor is back… and so is everybody else! Looking at the cover of Doom Coalition 4 suggests a smorgasbord of returning elements, something of a departure for a range that has up to now been pretty light on continuity. So I’ll be bringing back my own returning element: the style of review I used on the similarly stuffed Dark Eyes 2 and 4, as I go element by element.

There are probably a lot of places I could start: the Doctor, his companions, the Weeping Angels, a cheap shot at Big Finish casting practices. But let’s start this review where Doom Coalition 1 itself began, with the Time Lord who contains all his past incarnations within himself — and is, as a result, a bit mad. Mark Bonnar’s antics launched the Eighth Doctor off on this journey, and one of the interesting things about the structure of Doom Coalition is that the Eleven has gradually receded in importance as we’ve come to understand the structure and real purpose of the coalition. Bonnar, however, is still good at what he does (one ill-advised scene right out of the television serial killer playbook beside), given a couple good scenes in Episodes Three and Four as he taunts random minions, the Meddling Monk, and Helen Sinclair, treating all with equal disdain. Additionally, following on from the revelations of Doom Coalition 3, we get to hear more from the Eight. It’s an interesting sleight-of-hand that was pulled on the listeners, and I’m still not sure what I think of it; part of that will be determined by what comes next for the Eighth Doctor, I suspect.

So what about the actual villain behind Doom Coalition? Volume 3 revealed this as none other than Doctor’s old school friend. In retrospect it seems incredibly obvious, the kind of “twist” employed by Doctor Who highlights such as Arc of Infinity: the “old friend” you never saw before was actually evil! But I think Doom Coalition got away with it because in volume 1 there was no indication there was an actual villain, so there was no-one to suspect. It also gets away with it because of the writing of John Dorney and Matt Fitton, and the performance of Robert Bathurst. Padrac is never portrayed as moustache-twirling evil man, but as a selfless xenophobe: a man who does whatever he has to for the greater good, so long as the “greater good” is considered equivalent to “the wellbeing of Gallifrey”. He’s not a hypocrite, he’s not out for selfish reasons, he simply has a single-minded goal of Gallifrey Above All. Bathurst is a pleasure to listen to, and Padrac makes for an interesting villain as a result — especially as we in the audience know, thanks to the revived series, that Padrac is right. Gallifrey Will Fall, and it is indeed the Doctor’s fault.

Look, there might be members of the Doom Coalition you think less about: Padrac and the Eleven seem to hog all the limelight, and the Clocksmith got a lot of focus in volume 3. But the Sonomancer comes into prominence in volume 4, and Emma Cunniffe gets a lot more to do, and really impresses this time. I sort of bounced off Scenes from Her Life in Doom Coalition 2, but her role in Stop the Clock is surprisingly integral.

Look, man, Charley Pollard, she’s the best Eighth Doctor companion. But Liv… Nicola Walker impressed me right away in Dark Eyes 2 and has never stopped impressing me. She impresses all the way across Doom Coalition 4, of course, but never moreso than in the first episode, Ship in a Bottle. Episode One is a three-hander with the Doctor and Helen, as they drift into an empty universe in a powerless pod. Liv is the heart and soul of this team: the Doctor and Helen both have their moments of despair — but Liv never does. And this makes sense. Liv lived under a Dalek occupation, got space cancer, and ran to the end of the universe to get away from it all… and it still turned out alright. So if anyone knows how to maintain optimism it ought to be her. To Dorney’s credit, he doesn’t give her a speech where she says any of this, but compare this Liv to the despairing one of Dark Eyes 2 and 3, and it’s worlds apart, but still recognisably Liv, in all her dour, sarcastic glory. If I had to be thrown into a space pod beyond known time, I’d definitely want Liv at my side, and there are times I think she’s too good for the Doctor.

I’m not quite as in love with Helen as I am Liv, but who could compete with Liv? On her own, and paired with Liv, Helen is an excellent companion, and I feel like Hattie Morahan has really settled into the role at this point. There are times it seems like she has little to do alongside superbeings Doctor and Liv, but Dorney and Fitton turn that into a feature in this set. What turns out to be her strength is her ability to trust and to connect (Liv is a lot of things, but social butterfly is not one of them), which helps the team with River Song, and at a key moment in the finale. And the very oppression that weighed her down back in volume 1 is transmuted into a source of commonality and strength in a stand-out moment.

I had kind of wondered why River has been in these Doom Coalition stories, and she feels a little squandered in Episode Two, Songs of Love, a Doctor-light story about River on Gallifrey while Liv and Helen flee for their lives. River is a little too flip, and the plot never really kicks off, leaving the premise feeling underdeveloped. But I think it all becomes worth it in her final scene, where she communicates a message about love — a message which only River Song could give — and thus becomes key to the whole Doom Coalition saga. I don’t know how much longer Big Finish can go to the meeting-Doctors-who-must-forget-it well, but this dip has worked. There are some surprising tie-ins to Series Six of the new TV show, but they make sense.

Much as they have two excellent Masters, Big Finish have also ended up in the circumstance of having two excellent Monks. Graeme Garden put in some fantastic performances in Series Four of the New Eighth Doctor Adventures and The Secret History; over the past year, Rufus Hound has likewise distinguished himself in The Black Hole and The Blame Game. I don’t know if Garden was unavailable, but now Hound is crossing over from the early Doctors to the later ones, only Matt Fitton makes this a virtue: this Monk refuses to state if he is before or after Garden, and refuses to accept responsibility for what the Monk did in Lucie Miller and To the Death in any case. But the Doctor, even in his more upbeat post-Dark Eyes phase, doesn’t forgive so easily. The Monk’s role in The Side of the Angels is kind of small (there’s a lot going on), but he provides some good comedy of course, and like Garden, Hound is capable of making the Monk so pathetic you begin to feel sorry for him. The final scene between Hound and McGann is fantastic. I hope we keep hearing from this incarnation!

In one of those moments where it feels like streams have been crossed, Cardinal Ollistra of the War Doctor sets makes her retroactive debut here (though I note that the script leaves wiggle-room for the Doctor and Ollistra to have met before), this time played by Carolyn Pickles. Pickles’s Ollistra is more personable but if anything even more ruthless given her counter-plan to Padrac’s for saving Gallifrey. I don’t know that she needed to be in this story, but if you needed a ruthless Time Lord, you might as well have her, and it’s nice foreshadowing for the Time War. (One supposes Ollistra will appear in the forthcoming Eighth Doctor Time War box set.)

Gosh, how did Big Finish ever manage to get Beth Chalmers back?

If you’re going to go new series, why not go all the way, I guess, and the Weeping Angels turn out to be a key part of Ollistra and the Monk’s plan to save Gallifrey. Really, they’re just there to be a nemesis; you could probably rewrite this story with any dilapidated old enemy — a contingent of Cybermen skulking in the sewers, or plotting Daleks, or even a squad of struggling Sontarans. But though the Angels don’t always work on audio as well as on telly, there is one very effective scene of Helen and Liv doing their best to hold the Angels off, and that makes it all worth it.

With so much going on, it’d be easy to lose track of the Doctor in all this: and indeed, he does take a whole episode out at one point. But clearly an effort has gone into giving Paul McGann interesting ground to cover, with the Doctor’s despair in Ship in a Bottle and his anger at the Monk in Side of the Angels and his cleverness and optimism in Stop the Clock. While Dark Eyes had a sort of mishandled character thread running through its 16 discs, Doom Coalition has been more about plot: the Doctor has been a steady, but somewhat undynamic presence throughout. Whatever comes after this, I hope for something a little less apocalyptic than Dark Eyes and Doom Coalition, something where the character of the Doctor doesn’t almost get lost in the shuffle.

Big Finish have in the past produced real triumphs for the Eighth Doctor: the run from Invaders from Mars to Neverland, The Natural History of Fear, Terror Firma, much of the New Eighth Doctor Adventures. I don’t think Doom Coalition is quite on that level, but I feel like it holds up pretty well; my instinct is that it will form a more satisfying 16-part story upon relistening than Dark Eyes did, and unlike Dark Eyes, it never once gets lost in technogubbins about particles. With highlights like The Red Lady, Absent Friends, and Ship in a Bottle, Big Finish have produced a solid set of adventures for the Eighth Doctor. Someday he’ll have to crashland on Karn, but until then, long may he live.