Doctor Who: Casualties of War review 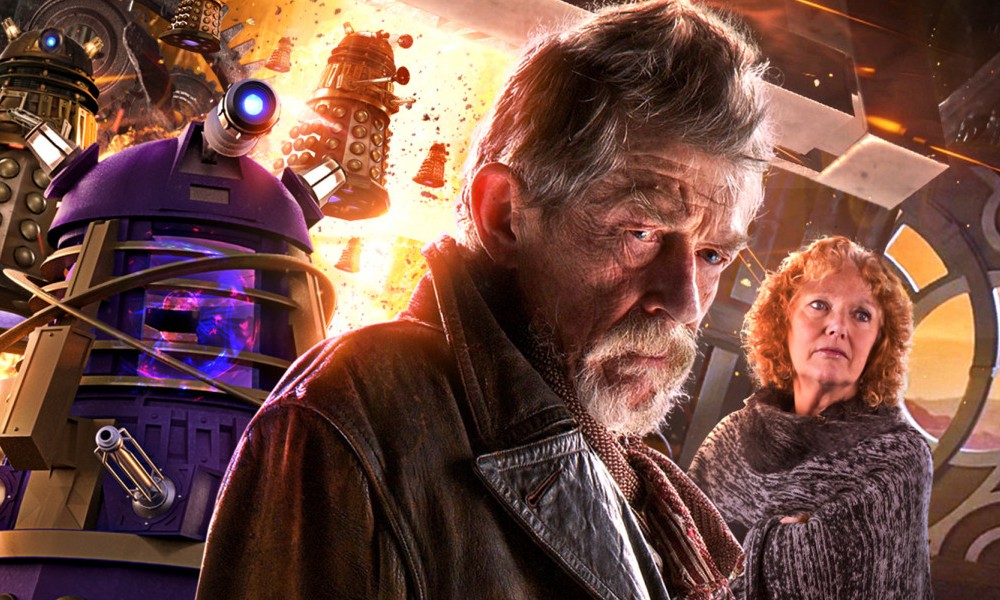 Who would have thought that Sir John Hurt would play the Doctor on screen in Doctor Who in a blockbuster fiftieth anniversary special? That we have the delights of The Day of the Doctor itself seems improbable in and of itself; that the greatest actor to ever play the Doctor agreed to do Big Finish boggles the mind. Like, surely John Hurt had better things to do? It seems that he did not, that he was as delighted as we were that he was the Doctor.

Tragically, Casualties of War will be his last outing as the unnumbered incarnation of the Doctor. The last War Doctor box set came out just weeks after his death, the timings of production such that an extra MP3 track on the download is all that could be done to mark Sir John’s passing. Yet there’s an air of finality about the whole thing. Casualties of War picks up right from the end of the previous War Doctor set, Agents of Chaos, and takes us from there to Gallifrey, and to the beginnings of an inkling of a fateful decision.

It’s no secret that I haven’t been fully entranced by Big Finish’s approach to the War Doctor and the Time War, and Causalities of War contains both the strengths and the weaknesses of the saga so far. The weaknesses are very much on display in the first story, Pretty Lies by Guy Adams. The Doctor and Cardinal Ollistra, on the run from the Time Lords, meet a war reporter. There’s certainly a clever and compelling story on war reporting to be done in the context of the Time War; Pretty Lies isn’t it. You can pretty much guess it all from the title. The war reporter is gung-ho and opportunistic, and even though he comes from a neutral planet he seems to be writing Time Lord propaganda. I could imagine a story tackling the necessity of propaganda, but this story doesn’t go there. Having recently been reading about journalism during the Arab Spring, I could also imagine a story about the dangerous necessity of war reporting. This story doesn’t go there either. Still, it has occasional moments of strength: the Doctor talking to an old man who wants to hang on to every moment; Ollistra whipping a local government into a fighting force, finally showing she’s the strategist the stories claim she is; the camp EDITOR computer played by Mark Elstob. The ending attempts tragedy, but is so obvious as to be banal.

Louise Jameson knocks it out of the park as Leela, but The Lady of Obsidian doesn’t quite give her what you’d expect

Interestingly, the War Doctor tales have largely avoided fan-pleasing moments. I’m sure we all want to know what Romana, K9, Susan, Drax, Professor Chronotis, Commander Maxil, Irving Braxiatel, Coordinator Narvin, and Rodan were up to during the Time War, but none of these characters have been even mentioned in the Time War sets so far. Casualties of War gives us our first kiss to the past with the reappearance of Leela, reprised once again by Louise Jameson. She knocks it out of the park, of course, but The Lady of Obsidian by Andrew Smith doesn’t seem like it quite gives her what you’d expect. The Leela here is lost and confused, but still recognisably Leela, fighting the good fight even though she doesn’t know her own past. Jameson gets some great moments as she sorts through who she is, and explains the tragedy of what’s happened to her. But on the other hand, you might think there’s a potent irony in Leela discovering the Doctor who was always training her to not be a warrior is now himself a warrior, yet the story doesn’t go there. Instead, we get a misjudged fight against the “Unlived”, who aren’t half as interesting as their name makes them sound. Chris Porter puts in a very annoying performance as their leader, who the cast list tells me was “Skaul”, but sounded to me like “School”, hardly the most intimidating moniker.

Nicholas Briggs originated Big Finish’s approach to the War Doctor in Only the Monstrous, and he returns to wrap it up with the last story in this set, The Enigma Dimension. The Enigma Dimension is the best War Doctor story since The Neverwhen, and maybe the best Big Finish War Doctor story full stop. A mysterious artefact appears both above and on Gallifrey, and the Doctor, Leela, and Cardinal Ollistra must push beyond the bounds of knowledge to work out what exactly is going on. The Enigma Dimension is eerie and strange, and more like what I would have thought the Time War would be like from Russell T Davies’s evocative imagery. It’s more stripped back, and more personal, and it shines a light into the character of the War Doctor in a way these stories haven’t always done. Howard Carter has always done well on sound and music in this range, but give him something less bombastic and more intimate to work with, and he really pulls out all the stops, elevating Briggs’s material with some great sound design.

As a result, it’s probably John Hurt’s best hour on audio. In a way, it seems unearned when the Doctor claims the Time Lords are as bad as the Daleks — these stories have very much concentrated on the villainy of the Daleks, and have almost always put the Doctor on the side of the Time Lords. But John Hurt’s weariness and anger are enough to sell it, and you really do believe that he’s willing to wipe out both sides if it means that the war will be over. Louise Jameson is, as ever, a delight, but on the other hand, Jacqueline Pearce feels wasted as Ollistra, who has gone from master strategist on Disc One to asking “What’s that, Doctor?” on Disc Three.

I will probably be forever disappointed that these War Doctor stories weren’t better than they were. Yet, Casualties of War shows them at their best, and provides a fitting end to this sequence. We were lucky to have John Hurt, and these stories show us why.