Doctor Who: Agents of Chaos review 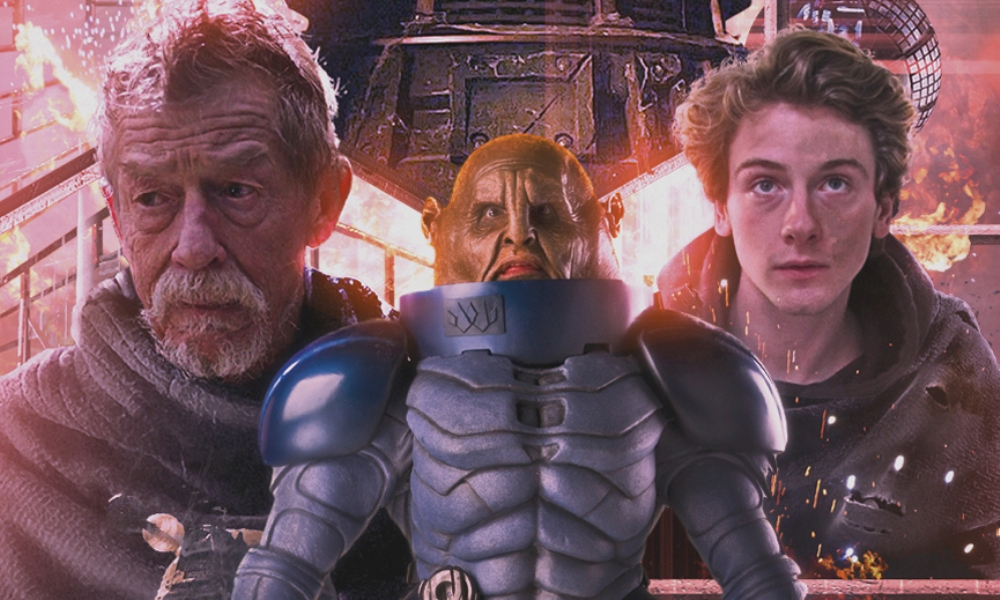 Who would have thought the Time War would be so ordinary? For years under Russell T Davies, the Time War was built up as this enormous, mythical event. Steven Moffat has largely stayed away from it during his tenure, but made one enormous contribution when he did engage with it, establishing that Sir John Hurt had been the Doctor during the unseen conflict — or rather, not the Doctor, since he gave up his name so that he could give up the morality that went along with it.

Why get John Hurt and give him scripts you could imagine Colin Baker doing without a single word change?

Despite the fact that all this indicates the Time War should be unlike normal Doctor Who, Big Finish has been giving us resoundingly ordinary Doctor Who in The War Doctor. Or not even that, since Doctor Who ordinarily should surprise and confound, yet what we’re hearing on audio is typically the most generic of war movie stuff. Compare this set to what was done with war in the last TV series’s Zygon episodes. It’s no contest. The most recent War Doctor set contains three more adventures for the unnumbered incarnation: David Llewellyn’s The Shadow Vortex, Andrew Smith’s The Eternity Cage, and Ken Bentley’s Eye of Harmony. Each could be a great story — none of them are particularly even good stories.

The Shadow Vortex brings the Time War to Earth, during the Cold War. This one feels like it’s a single rewrite away from being something great, but it’s not to be. The Doctor in Berlin during the Cold War, on the wrong side of the Wall. There ought to be thematic resonance there: two unending, seemingly purposeless wars that distort the world beyond recognition. Yet what we get is just a really generic adventure, as the Doctor chases after a Dalek agent working to build a Really Big Time Thing, the sort of weapon Daleks work up almost every time they appear in a Big Finish story. The story is filled with ciphers, the worst being the British Army officer who lets a woman who defected only hours ago build a giant device with unknown science in the heart of Berlin. Yes, this seems probable. There are things to like here — Neve McIntosh’s character, the Dalek agent, intrigues in her brief time and with her unspoken history — but it’s a somewhat subpar ordinary adventure with the occasional interesting bit that stays underdeveloped.

It seems to be mandatory that each War Doctor set has a story where the Doctor is shanghaied into going on a commando mission behind enemy lines with a Time Lord unit: Only the Monstrous has The Thousand Worlds, Infernal Devices has A Thing of Guile, and Agents of Chaos has The Eternity Cage. It also seem to be mandatory that this story is always the worst one in the box set. Like those stories, The Eternity Cage is depressingly dull, as the Doctor is once against accompanied by a group of Time Lord characters who range between pompous and naïve, usually both. When you’re going to have an entire range based around the Doctor hanging out with Time Lord characters, it seems obvious that characterisation for the Time Lords would have to move beyond that of Arc of Infinity, yet it never happens. Either Big Finish needs to learn how to write Time Lords as people, or they need to stop populating every War Doctor story with them. Like The Sontaran Ordeal in Classic Doctors, New Monsters, also by Andrew Smith, this story features Sontarans trying to partake in the Time War, building on a reference in The Sontaran Stratagem. But this story is much less interesting than that one, with the Sontarans not approaching the depth of that story and dull native characters (oho, you call the Doctor “Greybeard”, how cute) to boot. Why can’t the Sontarans participate in the Time War anyway? It seems like there should be something interesting behind that, but here it’s basically the Time Lords and the Daleks agreeing, “Nope, you’re too dim”, and it being left at that. As is so often the case in these stories, the television programme implied something much more interesting that what we get to hear here.

Lastly, we have Eye of Harmony, which is sort of Journey to the Centre of the TARDIS, but with Daleks in. It’s about as good, the whole story hinging on the pretty unconvincing character of Heleyna played by Honeysuckle Weeks. Now, I loved Weeks in Foyle’s War and given how well her Foyle’s War colleague Anthony Howell has prospered at Big Finish, I was looking forward to her taking part immensely. Alas, Heleyna is a nonsensical character with improbable motivations. She would be difficult to play convincingly in any circumstance, I suspect, but Weeks doesn’t do a very good job here at all, making her borderline hysterical through most of Eye of Harmony. That some of the character’s oomph depends on a familiarity we don’t have — she’s supposed to be Cardinal Ollistra’s long-serving trustworthy aide yet she was nowhere to be heard in the last two sets — doesn’t help. This story is a lot of noise, but very little tension in what feels like should have been an incredibly tense scenario.

In addition to wasting its premise, this range also wastes its stars. Moffat’s brilliant move of casting John Hurt and Big Finish’s major coup of persuading him to return to the role on an ongoing basis seem completely pointless if he’s written not as the Doctor so dangerous he changed his name, but the most generic of Doctor. There’s little for him to do in this set that any Doctor couldn’t do; in Only the Monstrous we got hints of a wounded man, but this Doctor seems less wounded than Paul McGann in Dark Eyes or Peter Capaldi in Series Nine. Why get John Hurt and give him scripts you could imagine Colin Baker doing without a single word change? Or worse, scripts that Colin Baker would reject as uninteresting? Similarly, I want to like Jacqueline Pearce’s Cardinal Ollistra, but for a master manipulator, she sure does come across as naïve in this set. I’d like to see her do something really nasty, but she’s one of those characters everyone talks about as if she is nasty, and that apparently must suffice.

If you’ve been enjoying the War Doctor stories thus far, well, I suspect you’ll like this one too, as it’s more of the same. But if you, like me, were frustrated by the first two sets, this one will only confirm your opinions.