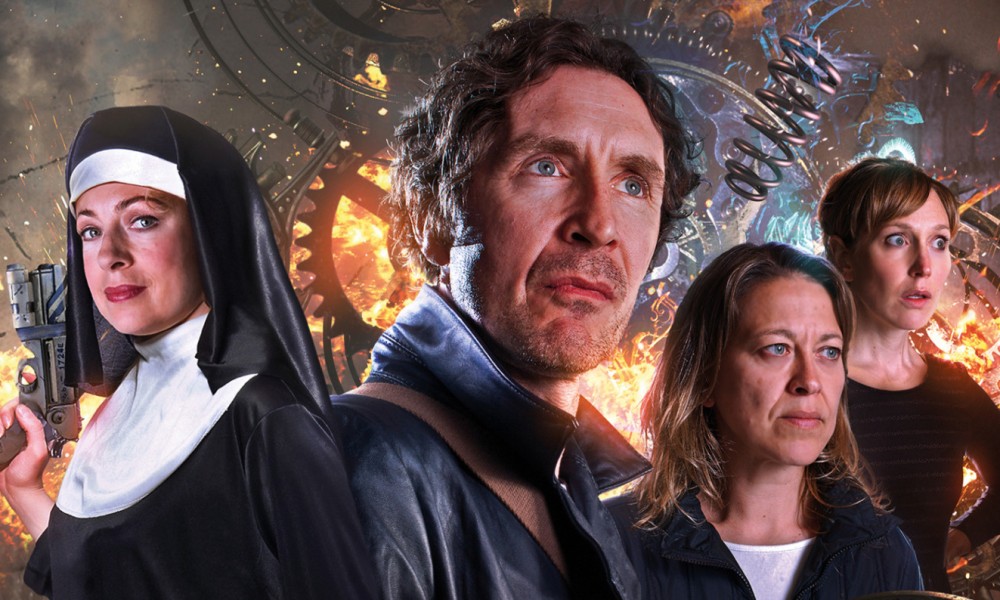 In the extras to Doctor Who: Doom Coalition 3, writer John Dorney argues that as Doom Coalition is a four-part story, folks were a little premature in expecting that the situation would be clear as of the end of Part Two. This is only half true, as I would argue it’s a very different thing to watch a four-part story weekly on TV for free than to pay $35 to hear each part every six months. After I’ve spent $70 on it, I want to know what it’s about! Regardless of whether the story was spooled out a little too slowly, though, Doom Coalition 3 makes up for that.

Hattie Morahan continues to impress and engage as Helen, but the star of Absent Friends is Nicola Walker, who makes Liv feel utterly real at every turn

Not before starting with a little breather, however, in the form of John Dorney’s Absent Friends. In my review of Doom Coalition 2, I complained that we weren’t getting enough Liv Chenka: “it’s a shame we only get these eight one-disc adventures with her per year; I’d really like to hear her in a two-hour main range audio, where the characters get more of a chance to breathe amidst the plot”. Well, the Big Finish box set has a different way of bringing characters to life — when you have four hours to tell a story, you can afford to make one a low-key character study, and that’s exactly what Dorney does. When the TARDIS lands in a sleepy 1990s village instead of Gallifrey, the Eighth Doctor investigates, Helen goes to London to see about her family, and Liv talks on the telephone.

It’s perhaps a little too slow at the start, but once it takes off, it really takes off. Hattie Morahan continues to impress and engage as Helen, but the star of the show is of course Nicola Walker as Liv Chenka, who is fast becoming my favourite Eighth Doctor companion who’s not Charley. Walker makes Liv feel utterly real at every turn. There’s one scene here that had me almost tearing up, and it’s hard for me to imagine any other companion reacting the way Liv does here, which is to do the right thing stoically and explode only once it’s too late, because Liv is a woman who’s seen too much pain, but has to keep moving onwards anyway. Also this one has got some good jokes in it, and you can’t go wrong with that.

Matt Fitton contributes a two-parter that forms the centre of this box set: The Eighth Piece and The Doomsday Chronometer. Maybe it’s the return of River Song, but this one has the feel of a Steven Moffat story: lots of fast action, lots of narrative sleight-of-hand, lots of people saying things that sound quite dramatic but are sort of emotionally empty, lots of time loops that deprive some events of their interest because they turn out to have been “destined”. The Doctor, Liv, and Helen split up to search for different pieces of a powerful object, and each meets someone different: the Doctor meets Thomas Cromwell, Liv meets the Clocksmith, and Helen meets River. Like my list of a “lots of”s indicates, it’s a bit of a mixed bag. I struggled with the scale of it all — there’s a lot of people claiming things are important, but too often not enough is done to sell the reader on the importance, and some aspects of the story remain frustratingly opaque. The high point of the story is definitely John Shrapnel’s performance as Cromwell. It’s just a shame that he doesn’t have more to do. The other high point is its ending, but that’s more a reflection on what comes next than what went before.

The Crucible of Souls is difficult to discuss sans spoilers, but it’s a story intriguingly about disguises: River is in disguise, the Doctor is in disguise, it turns out a character in The Eighth Piece was in disguise, and there are more I can’t even allude to here. It could be confusing, and sometimes is, but John Dorney manages to keep the listener on top of it all more often than not. He has a lot of characters to work with here, and sparking them off one another in different permutations — as they pretend to be different people — makes for an interesting game. Though there’s more to learn, I suspect, we learn enough that how Doom Coalition coheres begins to become apparent. This episode also features excellent performances from Robert Bathurst — returning from Volume 1 as Cardinal Padrac — and John Heffernan, who does a lot with a difficult but fascinating role.

The one real downside of the set is that, given the emphasis on the companions and guest characters, the Eighth Doctor himself kind of gets lost

The one real downside of the set as a whole is that, given the emphasis on the companions and on the guest characters, the Eighth Doctor himself kind of gets lost in the whole thing, surrounded by gigantic events and cataclysmic characters that he spends most of his time reacting to. There are no great Doctor-ish moments here, and not much for Paul McGann to sink his teeth into. Hopefully the final volume allows for a reversal of that trend, and lets my favourite Doctor strut his stuff! Also, though Benji Clifford’s sound design is usually strong, the endings to both The Eighth Piece and The Crucible of Souls aren’t pitched quite right, the cliffhanger endings not cutting in the way they ought.

That said, the end of The Crucible of Souls still promises drama to come, as do the hints on the CD extras. Doom Coalition 4 has had a foundation laid for it, one that could result in excellence. Let’s hope it does.