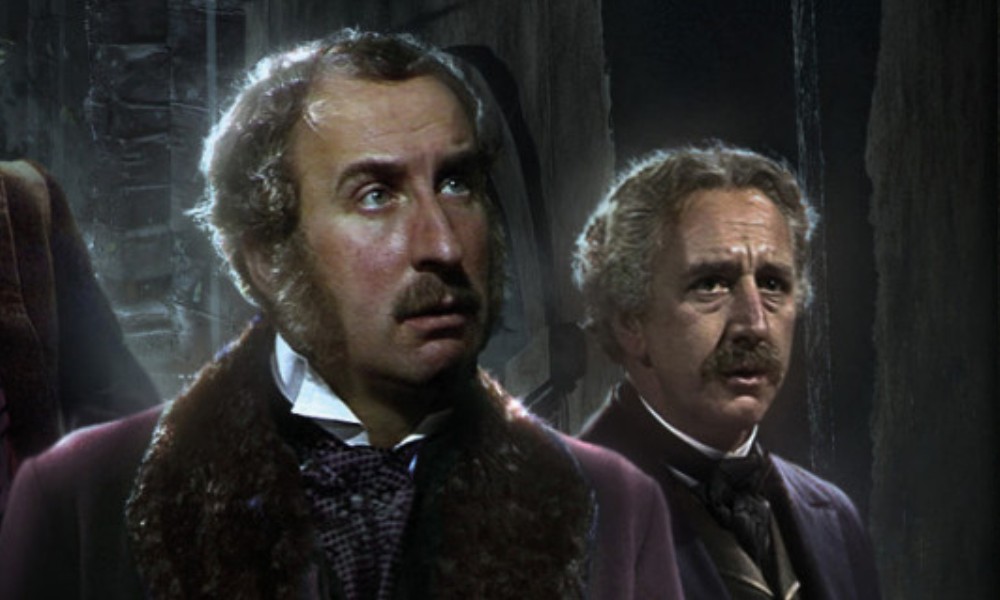 I had sort of half-guessed that Series Ten of Jago & Litefoot would be the last. I was completely wrong, of course. Series Twelve actually comes out next month, and Series Ten made sure to end in such a way that you knew the Adventure Continues: who should turn up but the Master, exerting a malign influence over Inspector Quick? Not only was the range going to continue, but they were continuing to do what Jago & Litefoot has always done: shake up the format to give us different angles on these long-running characters. And it was not just any Master, but Geoffrey Beevers, one of my favourites*I should caveat this by noting that my other favourite Masters are (I have a lot) Anthony Ainley, Eric Roberts, Derek Jacobi (both Shalka and Utopia versions), John Simm, and Alex Macqueen. Take this information as you will..

That said, I found the introductory story of Series Eleven, Jago & Son by Nigel Fairs, disappointing. The title promises fireworks for Jago, but they never come. James Joyce turns up playing Henry Gordon Jago, Jr., but Jago doesn’t even remember his mother — who he needs help saving. At the same time, Litefoot has reunited with an old college friend, now an archaeologist on a dig in London. Completely coincidentally, these things end up being linked. But aside from the shoddy plotting, it’s on an emotional front that the story disappoints. We don’t really learn anything about Jago from this incident, and the way it’s resolved at the end doesn’t make a whole lot of sense. It’s a shame, because I think Christopher Benjamin could have benefited from some unusual material, and really given us something special, but instead it’s kind of a bog-standard adventure.

On the other hand, the only disappointment I ever get from Matthew Sweet scripts is that Big Finish doesn’t commission more of them than they do. I don’t know why this man only produces a Jago & Litefoot script every couple years and that’s it, but at least we get Maurice as a result. It’s a stunning turn from Matthew Sweet in scripting and from Trevor Baxter in acting. Maurice Ravel (I know him as the composer of Bolero and maybe you do too) invites Litefoot to join him in his flat after they both take in a show. But Maurice is not what he seems. Sweet’s command of the character of Litefoot is absolute, and the story is full of beautiful, captivating imagery — much of it derived from poetry by the French poet Aloysius Bertrand, which really did inspire a suite of solo piano pieces by Ravel. Sweet is as inventive and captivating as ever, and Baxter shines in this extraordinary story. The Master plays a very small role in this episode, but gets his best material in the whole box.

Aside from his excellent appearance in Maurice, the Master feels a bit wasted in the set

The Woman in White by Simon Barnard and Paul Morris has nothing to do with the Wilkie Collins novel of the same name (whose Penguin Classics edition was edited by Matthew Sweet, actually), but rather is loosely inspired by Bram Stoker’s Dracula. It’s another delightful outing from Barnard and Morris, who make the leap that since Jago and Stoker were both theatre managers in London around the same time, they must have known each other. Stoker asks Jago for help when he fears his lead actor, Sir Henry Irving, is starting to go doolally. Of course the strange goings-on are supernatural in origin, and only Jago and Litefoot can help. It’s a fun script with good jokes, aided by two excellent performances from Jonathan Forbes as Bram and Edward de Souza as Sir Henry.

As it too often is for Jago & Litefoot, the finale — Justin Richards’s Masterpiece — is a bit of a weak link. The Master uses Jago and Litefoot to set a trap for the Doctor, but I felt the investigators of infernal incidents succumbed a bit too quickly to his malign influence. It has its moments — there’s a nice bit of seeming double-casting that wrongfoots you — but the ending is a bit of an anti-climax, with things revolved in the most predictable way possible.

Honestly, aside from his excellent appearance in Maurice, the Master feels a bit wasted in the set. The idea that the Master has Quick under his control doesn’t seem utilised to its full potential. But worst of all is that this version of the Master, scarred and disfigured, with overtones from Frankenstein, Dracula, and The Phantom of the Opera, feels like the perfect villain for a nineteenth-century Gothic tale — a brilliant match for Jago & Litefoot. But the Master is in the background for the first three tales, and the last story has none of these trappings at all, the whole story being much more of a standard Doctor Who plot than a Jago & Litefoot one. It feels like the character’s potential was squandered in this set, the frisson I felt when the Master popped up at the end of Series Ten not really delivered upon here. There are two strong Jago & Litefoot stories here, but no strong Jago & Litefoot Meet the Master stories, and that feels like a real shame. Geoffrey Beevers deserves to star in a Victorian Gothic melodrama, but this isn’t it.