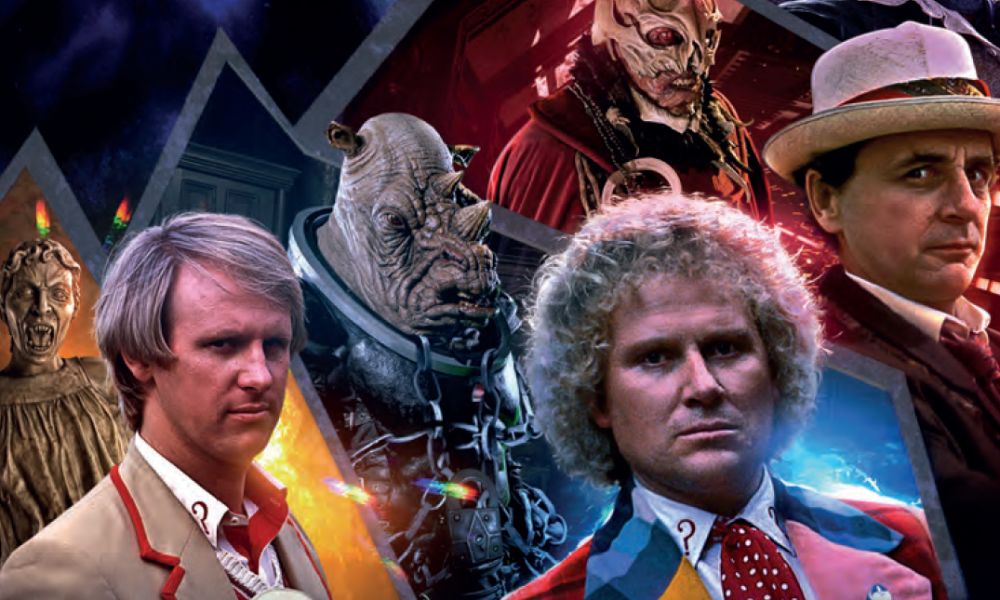 There’s maybe no obvious reason for Big Finish to do Classic Doctors, New Monsters: Volume One now that it has the new series Doctor Who license. Like, why not just do a main range story where the Seventh Doctor meets the Sycorax? Or the Fifth the Weeping Angels? I suppose sales are the reason Big Finish decided to use its access to these “new monsters” by making a four-disc box set consisting of one tale apiece of the Fifth, Sixth, Seventh, and Eighth Doctors up against the Weeping Angels, Judoon, Sycorax, and Sontarans, respectively. The result, though, is a pleasant surprise: whatever the impetus, I enjoy an excuse to listen to four diverse, snappy, unexpected Doctor Who tales.

The Weeping Angels seem like a good fit for the Fifth Doctor’s occasional propensity for tragedy; those days like Warriors of the Deep, Omega, Resurrection of the Daleks, and Spare Parts where despite being the nicest of fellows, he can’t do anything right. In Fallen Angels, Phil Mulryne returns to Blink as his primary inspiration, ignoring the diminishing returns of the Angels’ subsequent appearances while adding his own embellishments to their mythos. The Doctor finds two victims of the Angels in 1511 Rome, transported from 2015, at a time when Michelangelo is carving his own angel. I had my doubts that the Angels would work well on audio, but the opening of Fallen Angels is very atmospheric and frightening, thanks to director Barnaby Edwards and sound designer Howard Carter. It must be said, though, that I found some of the Angels’ later appearances in the story, particularly at the climax, to be less suspenseful than they ought to have been.

I had doubts that the Angels would work on audio, but the opening of Fallen Angels is atmospheric and frightening

Mulryne seemingly realises the ultimate paradox of the Angels, too — despite their frightening way of moving, what they do is actually not all that bad. Like, yes it would sort of stink to end up in the past, but as we saw in Blink, you can do that and live a pretty good life regardless. Mulryne gives us some bigger stakes, then, by bringing Michelangelo in: if the Angels get him, they don’t just wipe away his life, but the entire trajectory of Renaissance art. That sounds a bit silly now that I’ve typed it out, but the story succeeds into making it serious business.

Like most stories directed by Barnaby Edwards (Big Finish should get him in more often), Fallen Angels is immaculately cast. Diane Morgan is a real pleasure as the Doctor’s pseudo-companion, a physics academic named Gabby Finch. (And thanks to this story for introducing me to Philomena Cunk’s Moments of Wonder.) Joe Jameson does a good job as Piero, and the real star is Matthew Kelly, with a delightfully larger-than-life performance as Michelangelo.

Judoon in Chains puts the Sixth Doctor in court yet again, this time defending a Judoon from prosecution for desertion of duty in nineteenth-century England. Simon Barnard and Paul Morris’s story is probably the most inventive story in the Classic Doctors New Monsters set, in that it shows us a significantly different side to the Judoon than we’ve seen before. When the Judoon are hired to do a job that goes wrong, Captain Kybo of the Nineteenth Interplanetary Force ends up in a circus in Victorian England along with the Doctor — but he seems to be developing a greater consciousness than his fellow Judoon. My biggest complaint about this story would be that once it gets to the circus, things are paced just a little too languidly; it runs 77 minutes, but I suspect it could have done with 67.

Other than that, though, this is a delight. Nicholas Briggs outshines himself as Kybo, taking what was essentially a “joke” voice in Smith and Jones and instilling a whole character and personality into it. It’s easy to get annoyed at the man’s ubiquity, but there’s no-one better at this sort of thing. Kiruna Stamell puts in a nice turn as Eliza Jenkins, a fellow denizen of the circus, and I was surprised but in admiration when I learned from the extras that Edwards had cast an actress with dwarfism as a character with it! Also it was great for Nicholas Pegg to turn up; in the first couple years of Big Finish, every planet had a Nick Pegg on it, but this is our first time hearing from him since 2013’s Treasure Island, and it’s always a pleasure.

Barnard and Morris’s script is one of their better ones; I really enjoyed the jokes here, from Judoon poetry to the Doctor’s solution for wrestling a Judoon. This is a pleasant story that takes a familiar but underused monster and finds a new spin on it with ease.

Harvest of the Sycorax by James Goss is probably the least interesting of these stories, though as part of the bigger whole, it’s interesting enough. The Seventh Doctor discovers that the Sycorax are after the blood samples for every member of the human race, which will give them a new and unprecedented level of control. Of all the monsters in this set, the Sycorax are the only ones who never appeared more than once on television, and here they basically just repeat their tricks from The Christmas Invasion over again: blood control, chanting, honour duels.

The heart of the story is thus in the human element, and that’s good at first, but soon becomes a little repetitive. The Doctor’s pseudo-companion in this story is Nisha Nayar as Zanzibar Hashtag, who I enjoyed a lot, a representative of a society overly dependent on medication to solve all its emotional woes. But the satire against the over-medicated society got pretty dull pretty quickly, with the characters other than Zanzibar having no idea how to handle themselves in a terrible situation again and again. (I did enjoy the performance of Jonathan Firth as Cadwallader Cadwallader, however!) It’s all a bit too on-the-nose; when the Doctor hears Zanzibar’s full name and makes a comment about it being one of “those” eras, you’re like, “yes, I already got the point, James, thank you”. Plus, you know, some people need medication to function emotionally, and the story doesn’t really consider that at all.

The end of the story is pretty disappointing, when the Doctor and Zanzibar enact a plan that works with no hitches, but you have to wait a frustratingly long time for the plan to actually be explained. I wish this one had added to the Sycorax the way other tales in the box set did to their monsters.

(I should note that James Goss’s CD sleeve notes are in Sycoraxic, with a translation supposedly available on the Big Finish site, but if so, I can’t find it anywhere.)

Finally, there’s The Sontaran Ordeal by Andrew Smith: Paul McGann being, as ever, my draw to this release. The first Eighth Doctor tale by Big Finish to occur during the Time War (his Diary of River Song cameo excepted), The Sontaran Ordeal shows us what Night of the Doctor indicated: the Doctor helping where he can, but not fighting. The Doctor discovers the Time War has changed the history of the planet Drakkis, but that’s not all: the Sontarans have their own game to play. The Doctor must stop the Sontarans from causing more damage to Drakkis than his own people already have, while also unravelling a conspiracy against Jask, a disgraced Sontaran.

The plot here isn’t complicated; the pleasure is in hearing Dan Starkey and Christopher Ryan do their things. Starkey has of course played many a Sontaran for Big Finish, but I think this is Ryan’s first time doing so — they are both excellent. Ryan was one of my favourite parts of The Sontaran Stratagem, so I’m glad for him to get another outing, here as General Stenk. Starkey’s Jask has the honour of being a real character, too, but one that still functions perfectly as a Sontaran; as with The First Sontarans, Andrew Smith has a good grasp on the aliens. Josette Simon off Blake’s 7 is also enjoyable as Sarana Teel, this story’s pseudo-companion character.

Like I indicated at the beginning, each of these stories on their own would be somewhere between okay and very good, but put them together, and you have a nice diverse set of Doctor Who stories. James Goss says in the CD extras that these stories were meant to be in the “new series” style, but I don’t get why the “new series” style isn’t Big Finish’s “always” style when it comes to Doctor Who: character-based and quick. That’s not “new series” storytelling; it’s just good storytelling, and this box really shows that off.