Doctor Who: We are the Daleks / The Warehouse / Terror of the Sontarans review 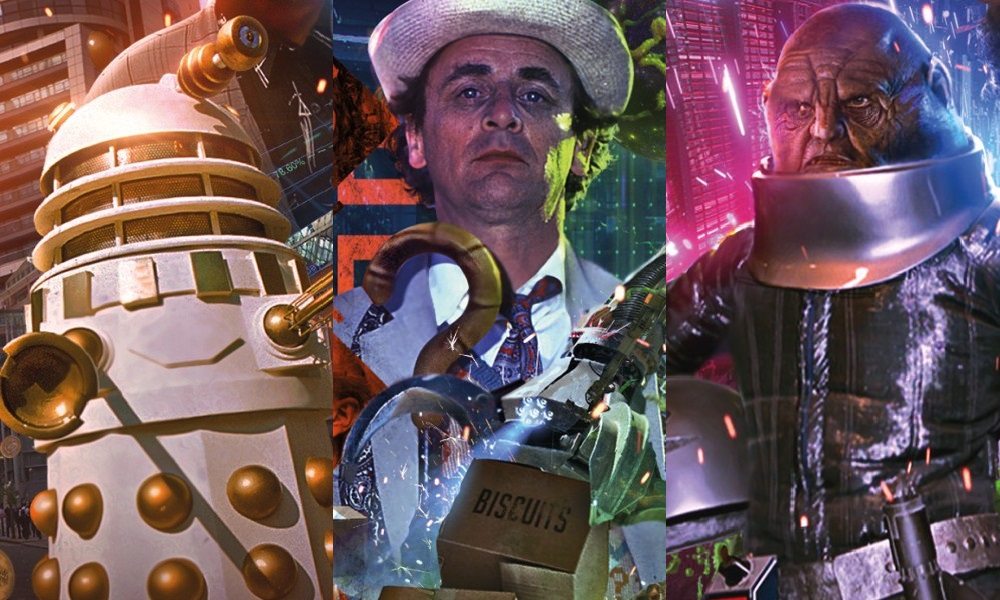 One of the many minor miracles Big Finish has performed with Doctor Who is to make me look forward to reappearances of Mel. 2015’s trilogy of We are the Daleks, The Warehouse, and Return of the Sontarans is the first time Mel has appeared alongside the Seventh Doctor since Red back in 2006! Obviously Season 24 has a bit of a reputation for being lightweight, and though that approach isn’t always emulated by Big Finish (Red itself being a case in point), this trilogy does take that tack, with a series of colourful, somewhat goofy, standalone adventures for the Seventh Doctor and Mel.

I wanted to like these stories more than I did

We are the Daleks, by Jonathan Morris, is probably the brashest and boldest of these, plunging the Doctor and Mel into the world of 1987, with computer games, investment portfolios, and Daleks. The Daleks have a plan to expand onto Earth — economically. Meanwhile, Mel is investigating a new computer game. We are the Daleks starts promisingly, with the kind of juxtaposition of disparate elements that can fuel a great Doctor Who story: the Doctor investigating a factory taken over by Daleks with a rabble-rousing labour union leader, for example. I like the idea of the Daleks trying out economic power, but if Morris is attempting some kind of social critique, the very caricatured politicians render it somewhat toothless. By the last part, though, it all feels a little tedious. Which might be my fault as much as the story’s; I think Thals are pretty much innately boring. I don’t think the story’s title quite lands in the end. It’s a title that would be more convincingly attached to Jubilee, for example, whereas We are the Daleks is too frothy to make you believe humans are as bad as the worst the universe has to offer.

The other two stories in this trilogy, The Warehouse by Mike Tucker and Terror of the Sontarans by John Dorney and Dan “Strax” Starkey, I found somewhat less effective. Neither is terrible — both have at their core decent ideas and include some great moments. The Warehouse is about an Amazon warehouse in space that’s been abandoned as its inhabitants take stock again and again for years. Terror of the Sontarans is about exploring an abandoned base with something so scary it scared the Sontarans. Both stories have some good guest characters (Jon Edgley Bond delights as “Anvil” Jackson) and some decent twists. Like some of the McCoy era, there’s a feeling of being larger-than-life about many of the characters, like the colourful folks who populate Paradise Towers or The Greatest Show in the Galaxy. But both stories are ultimately revealed to have somewhat thin premises. There’s only so much you can listen to people wander about a warehouse, even with a trip to another planet, or wander through an abandoned base, even with a space contortionist along. Both stories suffer from having interesting starting point, but not having developed sufficiently interesting stories to go with them, and by Part Four I found myself getting a bit bored.

I appreciate Big Finish’s desire to go looser on continuity and to tell some interesting standalone adventures, but judging from this and from 2015’s Constance trilogy, they haven’t quite figured out how to get back to the basics yet. I wanted to like all six of these stories more than I did in the end.