Doctor Who: Technophobia / Time Reaver / Death and the Queen review 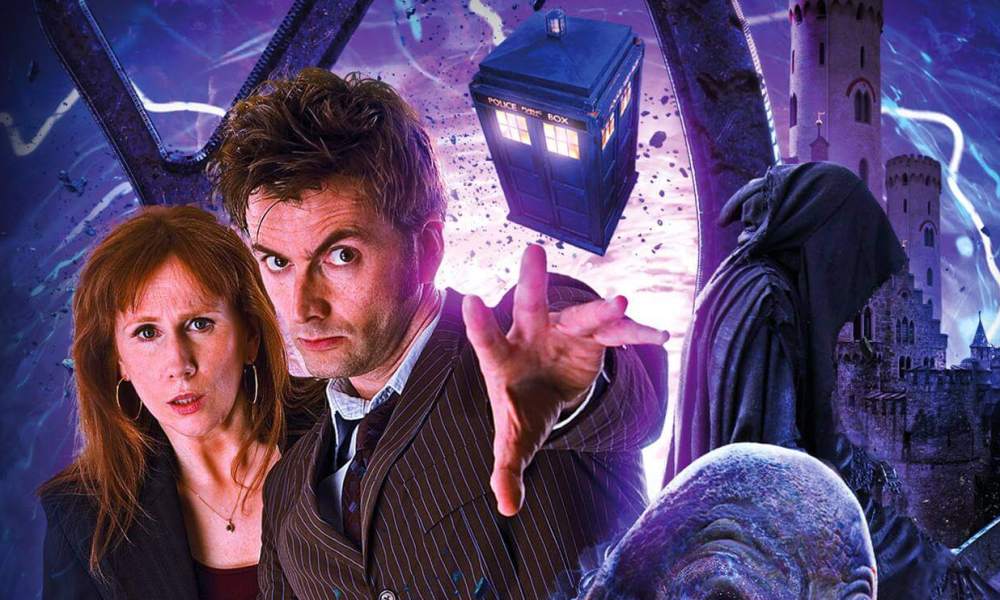 If you held a gun to my head and said, “Rank your favourite Doctor Who companions since the show came back in 2005”, I would probably come up with something like: Rose, Clara, Donna, Martha, Amy. But what this seeming middle-of-the-road ranking for Donna disguises is that when it comes to Rose-Clara-Donna, it’s a very tight race. Like, they’re all amazing characters. And in some ways, Donna is the best of them: but I’ll get to that. So anyway, when you tell me Big Finish is bringing back the Tenth Doctor and Donna Noble, as played on television in 2008 by David Tennant and Catherine Tate, I get excited. (Was it really so long ago? It’s kind of weird to think that there was a longer gap between Journey’s End and Technophobia than between the TV Movie and Storm Warning, isn’t it?)

Big Finish has celebrated the return of this classic TARDIS team with three one-disc adventures, emulating the era they were plucked from, which you can buy separately or as one five-disc limited edition. The set begins with Technophobia by Matt Fitton, part of this set’s clear aim to nostalgically recreate the Russell T Davies years, by having a contemporary season opener followed by a futuristic story and then a historical, as we got in 2005 and 2007, and with minor variations in 2006 and 2008. Technophobia plonks the Doctor and Donna in the year 2011, where technology is going horribly wrong.

This story is aiming for the “breezy series premiere” style of Smith and Jones and Partners in Crime, but misses out slightly by not having the depth of character that Davies could create seemingly without effort. Many of the guest characters feels like generic ciphers, and we don’t really learn anything new about the Doctor or Donna. Still, it’s fun to hear Tennant and Tate in action again from the teaser onwards, and Niky Wardley (once upon a time, a companion herself) turns in a good performance as “Bex with an X”, popping out amidst all the others with her very human fears and worries. Fitton’s script does have a good twist, but once you realise what’s going on, the ending becomes a little too obvious, and the alien villains weren’t much cop, either. Fun, but a little too disposable, like so many of Big Finish’s Fourth Doctor Adventures.

Time Reaver is bursting with great ideas and colourful characters

Things get much better with Jenny Colgan’s Time Reaver, slightly naff title aside. The Doctor and Donna travel to an alien space junction, and Colgan’s script is just bursting with great ideas and colourful characters. I was sort of mixed when it came to Colgan’s River Song script, but here she just knocks it out of the park, as she keeps on piling on the concepts both big and small, from the psychic earplugs to Donna relating some advice from her father.

Colgan takes full advantage of the canvas of audio: this is like The End of the World or The Rings of Akhaten, but amped up to a level that BBC Wales could never pull off. Howard Carter really rises to the occasion here, with a bevy of dynamic soundscapes the likes of which I don’t think Big Finish has given us in a long time. This is the kind of story where the sound design sings — as do the two leads, who get so much to work with. The guest cast is great too, from Dan Starkey cameoing as a terrible busker to Terry Molloy as an officious administrator who turns out to have more to hide. (Also the head office is a delight, just one of many ideas Colgan throws out. I think Doctor Who thrives when it juxtaposes three or four things at once, and Colgan gets that.)

Big Finish save the best for last with the final story, the historical adventure Death and the Queen by James Goss. Goss captures the humour of the lead characters, but also the sadness, as the Doctor feels he might lose Donna to another man. Goss’s script milks this for both pathos and humour — I loved the scenes at the beginning of the episode where the Doctor kept popping up during dates between Donna and Prince Rudolph of Goritania.

Again, there’s a lot to like here, from Donna teaching her servants how to read to Blake Ritson’s charming performance as Prince Rudolph (you really buy he’s marriage material), from Donna’s lady’s maid (played by the ubiquitous Beth Chalmers) becoming a pseudo-companion to the way Donna sacrifices herself to Death itself and how she pulls through afterwards (spoilers, I guess). All the stories in this set have got the banter of the 2008 series down, but what Goss really cracks is what makes the Doctor and Donna real people. (This guy is on fire recently; why doesn’t he write more Doctor Whos?)

Moving to the set overall, kudos to Howard Carter for sound design again, and for one of Big Finish’s better musical scores — in the absence of The Rueful Fate of Donna Noble his music will do fine, and his big musical theme for Donna is good enough to get stuck in my head. On the other hand, he sometimes overdoes it on the CD extras; I’m not convinced an interview with a guy who was in The Waters of Mars needs water sound effects when he talks about water, or running ones when he talks about running! Speaking of which, it’s a shame Colgan and Goss were apparently unavailable for comment, given the price you pay for that disc of extras and deluxe packaging. (That said, if you opt for the limited edition but usually listen to Big Finish Doctor Who releases, skip the fifth disc, which is a combination of trailers for recent releases and edited-down CD extras for those releases.)

With one pretty good adventure and two strong ones, this is an excellent Big Finish debut for the Tenth Doctor and Donna Noble. It hits the nostalgia note hard in parts, but Death and the Queen shows that Big Finish is not shying away from saying something more about these characters and their relationships. Volume Two hasn’t been officially announced yet, but I can’t wait to revisit 2008 (and 2007 and 2006) again…