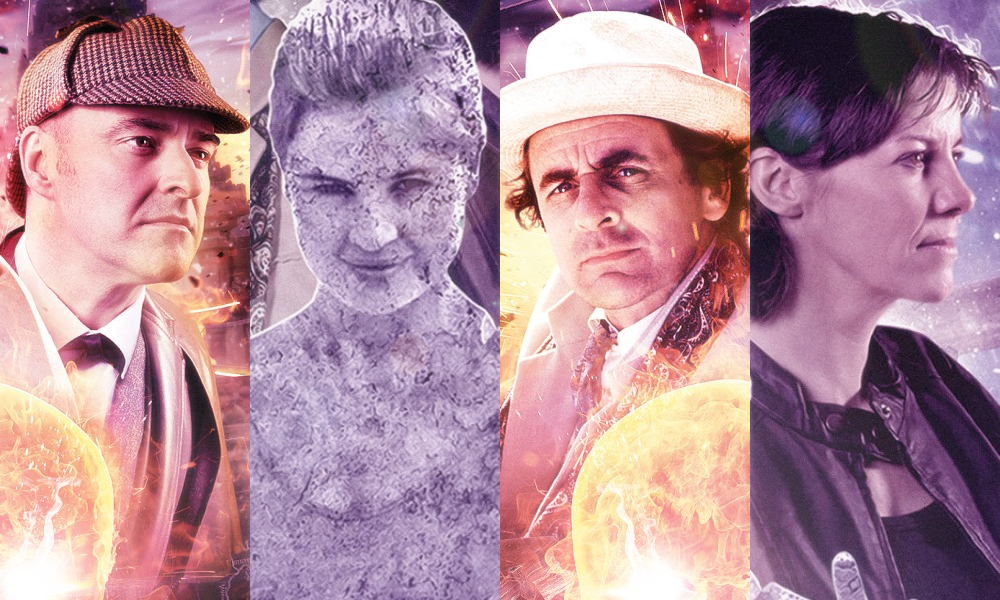 Since Love and War, Big Finish has been pick-and-choosing various New Doctor Who Adventures to adapt as novels. Sometimes it’s because they have a high-profile author, like Gareth Roberts or Russell T Davies, but the most recent pair of adaptations seems to be because they feature characters Big Finish has already cast in other productions. Justin Richards’s novel Theatre of War introduced Irving Braxiatel, since played by Miles Richardson for many years in the Bernice Summerfield and Gallifrey ranges, while Andy Lane’s All-Consuming Fire was a crossover with Sherlock Holmes and Watson, now played by Nicholas Briggs and Richard Earl in their own Big Finish range. There’s a certain pleasure in hearing these novels brought to life by familiar actors.

Theatre of War is a story of two halves: the first is a decently well done Doctor Who runaround, but the second is less interesting

Richards adapts his own novel in Theatre of War, where the Doctor, Ace, and Benny wind up in the middle of an archaeological dig in an ancient theatre on the planet Menaxus. Initially trapped in a recreation of Hamlet, they discover that there’s something mysterious afoot, so while the Doctor and Ace work to keep the expedition alive and recover some Menaxan theatrical technology, Bernice is sent to the Braxiatel Collection (for the first time!) to find out the backstory to what’s really going on. Soon, everything converges on the planet Heletia.

This is a story of two halves. During the first half, the Doctor and Ace run around corridors on the planet Menaxus: it’s a pretty standard Doctor Who runaround, and decently well done, but little about it is memorable. There is mud come to life and quotes from Hamlet and scared scientists, and that’s about it. The “meanwhile” segments in the first half are the real highlight: Miles Richardson is always a delight as Irving Braxiatel, and getting to hear his first-ever interactions with Lisa Bowerman’s Benny — given all that the two characters will go through together in Benny’s spin-off — is unmissable. He’s his charming, oily self right from the off, playing Benny (who he has met before, actually) and indeed the whole situation for the benefit of his Collection: a move he’ll make again and again with increasingly dangerous consequences during her series. The scenes between them were the definite highlight of the story.

The second half, on Heletia, is less interesting. Even on audio, Heletia seems to have been drawn on a small canvas like a 1970s television story: the whole planet seems to consist of three sets and four characters. It’s hard to care for the fate of the most generic of planets, which is what the second half mostly revolves around. Additionally, Ace — who is actually pretty badass in the first half — suddenly becomes dumb in the second half, needing the Doctor to explain some very obvious politicking to her (why would someone be obsequious to their planetary ruler?) and being flabbergasted as obvious turns of events (she discovers that a man she heard over the death of a thousand innocents has in the past killed thousands of innocents). But in this part, Sylvester McCoy does get to shine as he ingratiates himself with the petulant Exec of Heletia, and Benny gets her moments, too. The resolution is a bit too obvious, alas, to carry a lot of energy, and as plans go, Brax’s is a bit overcomplicated. It definitely had its charms, but Theatre of War is largely an above-average runaround. There are hints of something greater in the story’s consideration of the world of the theatre, but these are mostly pushed aside in favour of plotting concerns. I wonder if the novel does more with them.

All-Consuming Fire is a great play, milking the meeting of two great British icons for all it’s worth

All-Consuming Fire starts off fun from the very beginning. Richard Earl narrates the opening (as he does most of the audio) in character as Watson, with a nice little teaser that leads into the theme of Big Finish’s Sherlock Holmes range. Then, events introduce the Doctor — and then the Doctor Who theme kicks in. With essentially five leads in the Doctor, Ace, Benny, Holmes, and Watson, Ace gets shunted off into a role no bigger than a cameo, and Benny doesn’t turn up until around halfway through. But that’s fine, because Guy Adams’s adaptation of Andy Lane’s novel really makes the most of the intersections of the worlds of Doctor Who and Sherlock Holmes.

This is perhaps best driven home in a great scene where Holmes attempts his “trick” on the Doctor, only to be brought up short when he can’t identify the mud on his boots (from Menaxus). Lane and Adams are careful to permute the combinations here: Part Two is largely an adventure for the Doctor and Watson, while Part Three pairs Benny with Holmes (and also Watson). It’s fun hearing Watson with a companion even stranger than his normal one — but also more compassionate and personal, too. It’s also great to hear Benny mad at Holmes, and flirting with Watson. Alien invasion plot aside, these character interactions are the real pleasure of the story.

Sylvester McCoy, Lisa Bowerman, and Richard Earl are thus the high points of the story. (I’m still not sure what to makes of Briggs’s Holmes.) McCoy is allowed to be both mysterious and charming, perhaps his best mode. Benny gets to narrate part of the story, always a plus for Bowerman, and her going undercover as a man in India is just great. I’ve never heard Richard Earl as Watson before, but he’s a total gem here: personable, stolid, affable, competent, a little out of his depth but still gung-ho. He more than any other aspect of this production makes me want to listen to more Big Finish Sherlock Holmes tales.

The last part is less good than the others, as things get so cosmic that Holmes and Watson can’t play much of a role — and the listener doesn’t have much to hold on to, either. But aside from that, this is a great play, knowing that the meeting two great British icons of rationality should be a moment of great joy, and milking the concept for all it’s worth.