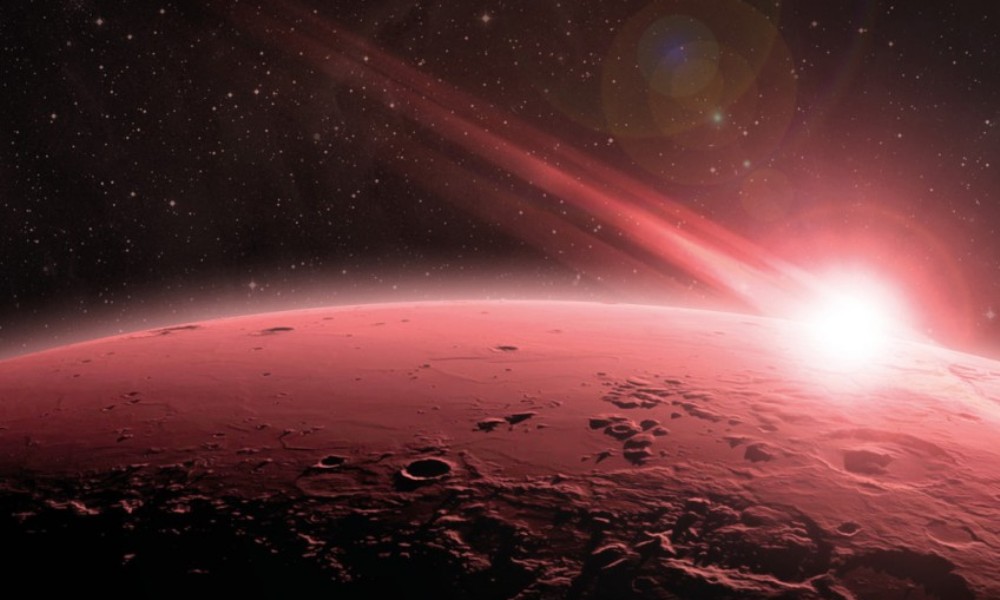 Back in the day, science-fiction writers loved to take semi-related short stories and smoosh them together into a novel in what was called a “fixup”. The problem with the fixup is that it doesn’t translate well into other media: it’s nearly impossible to imagine a good movie being made of Isaac Asimov’s I, Robot or Foundation, for example, and wise brains have tried. The miniseries might be the only visual medium where the fixup translates well: I have fond memories of the miniseries of Ray Bradbury’s The Martian Chronicles. But the subject of this review is the B7 Audio production of The Martian Chronicles, and its biggest challenge is somehow smooshing 26 lightly linked stories (in my 1975 Bantam paperback, anyway; I know other editions have different permutations) into one 60-minute story.

The Martian Chronicles has a sort of dreamlike, elegiac tone

Adapters Richard Kurti and Bev Doyle do this by adopting Captain Wilder as their throughline; the character, played by Derek Jacobi, provides some level of unity to events. As a child, he sees a rocket explode, giving birth to a lifelong desire to go into space. His recounting of this event as an adult is probably the best part of the play. Most of the story is him talking to his lawyer in military prison about his experiences with Mars, providing some structure to everything. Wilder’s story takes in the Bradbury tales —and the Moon Be Still as Bright, The Off Season, The Long Years, and The Million-Year Picnic. To be honest, it’s a bit of an odd set: none of them are the stories that ring out when I think of The Martian Chronicles. Mostly they seem to have been picked because (except for Million-Year Picnic) they’re all about Wilder or his crew, not because they’re particularly great stories.

—and the Moon Be Still as Bright is clearly the best of the tales here, and Kurti and Doyle devote the most time to it. Captain Wilder and his crew arrive on Mars to discover all the Martians are dead, infected by chicken pox from a previous expedition. But Wilder’s second, Hayley Atwell’s Spender, can’t stand the idea of humanity ruining such an ancient civilisation and goes rogue in her attempt to stop her former crewmates. Though a little un-nuanced at times (everyone who disagrees with Spender is depicted as a boor and a lout), it’s got something to say, and there are some real captivating scenes between Wilder and Spender.

The other stories just aren’t as good as —and the Moon Be Still as Bright, or as many of The Martian Chronicles that are omitted here, like Ylla, The Third Expedition, Night Meeting, or The Silent Towns. The best of The Martian Chronicles are about the tragedy of contact and colonisation, but The Off Season doesn’t really give us that: it’s an unsubtle hit at commercialism, while The Long Years is a sort of Twilight Zone tale that would work just as well in any different context. There competently done, but not the stories I would have picked. And lest anyone think I’m just slamming this adaptation for not being something it isn’t, I think even aside from the context of the original book, these parts of the audio drama are weaker: —and the Moon Be Still as Bright sets up some ideas about colonisation and tragedy and loss and commercialism that the story never really follows up. I wanted more like that first story, but I didn’t get it.

Which is a shame, because there’s a lot to work with here. Derek Jacobi is, of course, great as Captain Wilder. Seriously, this guy should be in every audio drama. Hayley Atwell (who we all now swoon over in Agent Carter, but fact fans know one of her first professional acting roles was on audio, in Big Finish’s Blood of the Daleks) also impresses in her role as Spender.

As someone who listens to a lot of Big Finish audio dramas produced by Nicholas Briggs and David Richardson, it was nice to listen to something by a totally different company, often working in a totally different idiom. A lot of BF stories can sound pretty samey, but The Martian Chronicles has a sort of dreamlike, elegiac tone, and it uses storytelling structures rarely used by BF. Always nice to hear Alistair Lock on sound design, and Imran Ahmad does a nice job with the music. Despite its weaknesses, this stood out as an interesting, different take on an old favourite.

The Martian Chronicles
by Steve Mollmann
Leave a comment