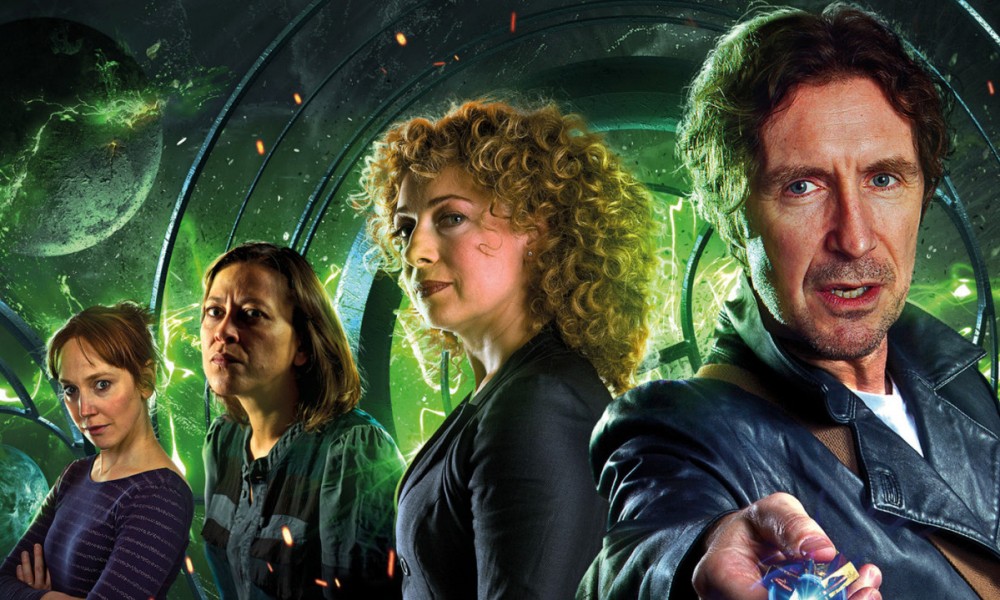 The adventures of the Eighth Doctor continue in Doom Coalition 2, the latest four-story box set from Big Finish. We still don’t know who or what the “Doom Coalition” is, but it’s beginning to emerge that this story isn’t just about the Eleven; there’s a bigger picture.

It’s small touches of character, in both writing and performance, that keep Beachhead engaging

Not that you would know it from the first story in the box, Beachhead. Nicholas Briggs, who once defined the Eighth Doctor during the Lucie Miller and early Molly O’Sullivan eras, writes his first script for him since Dark Eyes 2 in a story that brings back the Voord. While this is the sort of pointless fannish exercise that makes it easy to condemn Big Finish — at least Domain of the Voord tried to do something new with them, even if I didn’t really like that story — the inclusion of the Voord doesn’t really hurt the story either. Beachhead is an atmospheric piece, set in a besieged seaside town that the Doctor, Liv, and Helen have come to for a holiday.

The Voord themselves are largely irrelevant to the Doctor’s need to keep a small group of people alive, one of whom might actually know him. It’s small touches of character, in both writing and performance, that keep this one engaging, especially Rebecca Night and Julia Hills as the two Gregson women that the Doctor and friends spend most of the story interacting with. Liv and Helen have settled in as a TARDIS duo in a way I find quite enjoyable; the highlight of this story was probably a scene where Liv and Night’s Matilda Gregson are driving through the dark and the rain and spy a Voord in the worst possible place at the worst possible moment. The real failure of the story is that it sets up something potentially interesting with Phillipa Gregson’s character previously knowing the Doctor, and not liking him, but it just turns out to be a bit of colour that doesn’t add anything, which is a shame, as I think some nice character moments could have been derived from it.

John Dorney takes us to an unusual location with Scenes from Her Life, which introduces a new player in the Doom Coalition mythos. I was pleased to hear him admit on the extras that he was going for a Gormenghast vibe without having actually read Gormenghast, because I think that’s the ideal kind of Doctor Who genre pastiche: The Brain of Morbius, for example, being more based on someone watching a film version of Frankenstein than the actual novel. Doctor Who absorbs the cultural memories of these texts, not the actual texts. Anyway, I found this one a little off-putting, with grotesque characters — that weren’t quite grotesque enough. To be honest, I wanted more darkness. It’s unfavourable to compare anyone to Rob Shearman, but it’s hard not to imagine him handling this and it would be so uncomfortable. These characters sound weird, but do very little that’s really threatening. That said, there’s a bigger picture going on here that we don’t grasp until the end, and I think having that knowledge in hand will probably elevate it upon relistens.

The Gift is probably the best tale, full of great characters and strange imagery

The Gift returns the Eighth Doctor to the place of his birth: San Francisco, only 90 years prior. It might be the place of his death. Though Doom Coalition 2 doesn’t have a stand-out story like the first box’s The Red Lady, this is probably its best tale, full of great characters and strange imagery: writer Marc Platt in one of his stronger turns. Lots of good stuff with a gift too heavy to bear — it all feels like something out of a particularly bleak parable, and the American West setting gives it a distinct feel. The American accents are even good, although one of the characters sounds like he came straight out of 1930s New York. A nice, flavourful historical story. Like the better Doom Coalition stories, it uses the basic premise as a spring board for its own thing.

River Song feels a bit wasted in The Sonomancer: she’s just a person the Doctor and company meet

Everything comes to an end with a spectacle-driven finale in Matt Fitton’s The Sonomancer, which adds River Song to the mix. Like with the first box, this is probably the weakest part. I wish the Eleven (and his growing coalition) was given more interesting things to do. Mark Bonnar is obviously quite great in the part, but his plans so far have been BLOW UP THE SUN and BLOW UP AN ALIEN PLANET WITH EARTHQUAKES. I get that he’s “crazy”, but it would be nice to give him something with more comprehensible stakes, something that Our Heroes can be involved in more emotionally. I’d love to have more scenes with him sparring with Paul McGann’s Doctor; it feels like a waste that they barely even meet. The best Doctor Who villains (the Master, Davros, Count Grendel, the Valeyard, Nobody No-One) really get to chew the scenery with the Doctor, and so far that’s been lacking in this sequence of tales.

River Song feels a bit wasted here, too, which is a shame given how much I enjoyed Paul McGann’s appearance in her series. There, it gave the story some more emotional impetus, driving home how much the Rulers of the Universe were manipulating River’s life, but it doesn’t really do anything like that here: she’s just a person the Doctor and company meet, but that the Doctor can’t meet; it doesn’t add anything to the story, alas, and River feels curiously inactive for much of it. It is nice to hear Big Finish make use of “new series” elements outside of specially designated stories, though, and I did really like the rapport she built up with Helen Sinclair, as two female academics often encountering sexism: it works well.

The strength of The Sonomancer lies in these moments with our principal characters, but particularly Nicola Walker as Liv Chenka, who may now be my favourite Eighth Doctor companion who’s not Charley Pollard. This is a woman who’s been through a lot, and come close to dying, and as a result has no interesting in messing about: she’s going to see problems and fix them. The scenes here where she confronts the Eleven head-on despite what he did to her in The Eleven really shine and let her show her stuff. Liv Chenka for President! Seriously, it’s a shame we only get these eight one-disc adventures with her per year; I’d really like to hear her in a two-hour main range audio, where the characters get more of a chance to breathe amidst the plot. Hattie Morahan delights throughout the set as Helen Sinclair, naïve but idealistic, and with the Doctor, they make a great trio that I hope we get to hear from for a long time.

If you liked Doom Coalition 1, Volume 2 continues things at a good pace. I think it’s a little more level: nothing as good as The Red Lady, but everything here is better than The Satanic Mill. In some ways, it greater than the sum of its parts: the Doom Coalition format (unlike in Dark Eyes) is flexible enough to allow the story to go most anywhere, but it adds a certain energy to the proceedings, a sense of scale to these one-disc stories. Now that we’re at the halfway point, I wish the ongoing story was a little clearer (I’m worried we’re in for some kind of dreadful infodump soon), but I’m tentatively excited about seeing it unfold.