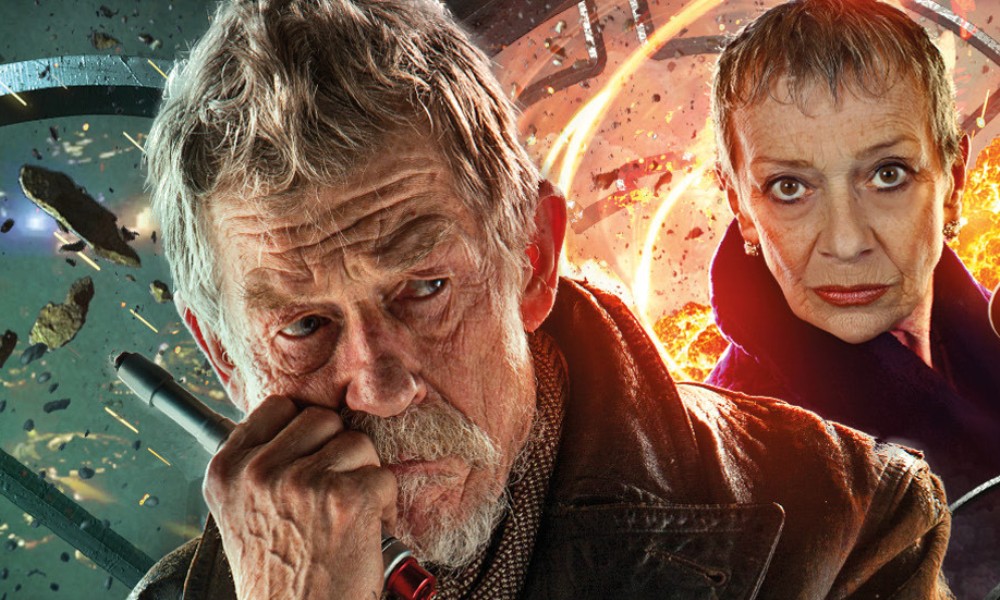 I’m back and it’s about time… for war! The War Doctor: Infernal Devices is Big Finish’s second set featuring John Hurt as “don’t call me that” during the Time War, following on from last year’s Only the Monstrous, written by Nicholas Briggs. Unlike Only the Monstrous, though, it’s definitely three smaller stories instead of one big one, bringing in a team of writers to explore the edges of the Time War.

Of all Big Finish’s series, this should be the one where the Doctor Who box is upended, but Big Finish seem strangely reluctant to do so

The set opens with Legion of the Lost by John Dorney, contractually obligated to contribute to every Big Finish box set whether he likes it or not. After a devastating battle, the War Doctor wakes up on a planet near the early time of the universe where the Tine Lords are allying with an alien race driven by magic, not science, who can use their powers to resurrect the Time Lord dead. Already Dorney is pushing the boundaries of the Time War more than Briggs, though Legion doesn’t entirely succeed in this regard: the Technomancers never really convince as practitioners of magic, coming across as a typical sci-fi race with banal trappings of magic. Compare with something like the way the Time Lords themselves were portrayed in Death Comes to Time, and this comes up short in convincing you that mysticism is in play. And we need that convincing: this needs to feel like something desperate, something the Time Lords would never countenance in other circumstances. There are some neat ideas here, but it’s all a trifle ordinary, and the pacing is wonky; it takes an inconceivable amount of time for the Doctor to cotton on to what’s going on. David Warner of course delights as Shadovar, leader of the Technomancers, but everyone else in this tale is a cypher.

This is followed up by Phil Mulryne’s A Thing of Guile, the most ordinary war story you can imagine. It opens in medias res, but it’s a set-up that’s instantly graspable: the Doctor, Cardinal Ollistra, and two boring Time Lords are using an old ship as a decoy to infiltrate a Dalek base. Despite this, there’s an extended flashback to explain the whole set-up. Probably this is because there’s nothing really to this story: a heroic Time Lord space crew you don’t care about fights to buy the Doctor and company time as they infiltrate a Dalek base in the most uninteresting way possible. There’s nothing at stake here until the very end, when the Doctor finally discovers what the Daleks are up to. But why make the most interesting part of this story a cursory addition? This story should have been built around this idea, not leading up to it. The whole thing is particularly dragged down by the two Time Lords who accompany the Doctor and Ollistra, whose personalities never go deeper than “the gung-ho one” and “the reticent one”. Again, there’s something potentially interesting in how a race of noninterventionists becomes a race of warriors… but Mulryne does not successfully mine that here. A Thing of Guile is probably the worst story thus far to go out under The War Doctor banner.

Finally, Matt Fitton — who can never miss a box set that John Dorney makes it onto — pens The Neverwhen. All snark aside, The Neverwhen is the best story to go out under The War Doctor title thus far. There’s a great concept: a realm where evolution and devolution wreak havoc with the biology of the soldiers. More than that, there’s a great execution, as Fitton shows how personal this can be for the Doctor, how desperately he wants to be worthy of the name he forced himself to deny these days. John Hurt acts the hell out of a couple scenes of desperation on his part, as he tries to save the souls of everyone trapped in the Neverwhen, in a way that’s both Doctor-ish but goes against everything the Doctor ought to stand for. The characters are a bit humdrum again, but on the whole, this is a very successful story, with lots of great moments for the Doctor, and truly showing the desperate nature of the Time War.

On the whole, Infernal Devices is more successful than Only the Monstrous, but this series still isn’t quite living up to my expectations for it. Producer David Richardson, director Nicholas Briggs, and sound designer Howard Carter are trying (Carter’s music really impresses), but these stories still feel too much like they’re inside the Doctor Who box. And not even in a good way: this is Doctor Who by the numbers much of the time. Of all Big Finish’s series, this should be the one where the Doctor Who box is upended, but Big Finish seem strangely reluctant to do so.