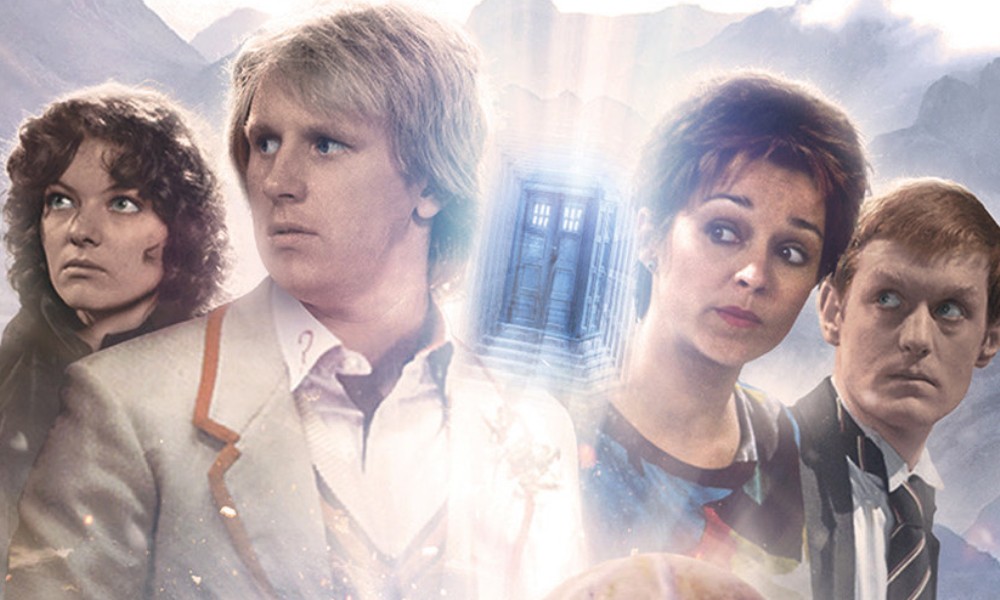 The “New E-Space Trilogy” (I’m calling it that, even if it’s not its official title), releases #195-97 of Big Finish’s Doctor Who main range, is two things. The first is a sequel to 1980’s “E-Space Trilogy”, where the universe is green, Tom Baker is glum, and K9 is constantly breaking down. Secondly, it ties off the “Older Nyssa” audio storyline that goes all the way back to 2010’s Cobwebs. So these stories really have to work on three levels: as satisfying sequels to Full Circle, State of Decay, and Warriors’ Gate; as a tie-up to a five-year running plot; and as stories on their own merits. I wanted to tackle each of these aspects individually, but it turns out they’re somewhat interrelated.

Nyssa’s life is a sequence of tragedy. It would have been nice for something to turn out all right for her for once

The last we heard from this TARDIS team was 2013’s Prisoners of Fate, which resolved most of the outstanding components of the Older Nyssa storyline: Nyssa cured Richter’s syndrome, she was reunited with her son Adric, and she and the Doctor successfully prevented themselves from undoing the events of Paul Cornell’s Circular Time, which would prevent The Caves of Androzani from playing out correctly. (It was a complicated story arc.) All seemed resolved — except that when Nyssa promised to meet her son Adric on another planet in a month, while he travelled by spaceship and her by TARDIS, you just knew it wasn’t gonna work out right, which was shortly confirmed by a last bit of narration from Adric stating he never saw her again.

You can debate the wisdom of this move, obviously. Nyssa’s life is a sequence of tragedy that she bears stoically again and again, something heartbreakingly driven home in Prisoners of Fate. She constantly opts for self-sacrifice in favour of the greater good, and every time she chooses something for herself — electing to travel with the Doctor a second time instead of immediately pursuing a cure for Richter’s, or deciding to travel back in time and be with her family — she gets slapped down for it by the universe and made to suffer even more. It would have been nice for something to turn out all right for her for once. And given that the whole problem of Prisoners of Fate was caused by Nyssa travelling in the TARDIS and not ending up where she wanted to be, it seemed a bit contrived that she’d undertake a final TARDIS trip.

E-Space seems to have been selected for this trilogy, then, to explain why Nyssa wouldn’t return home — because E-Space is a place it’s almost impossible to get back from. The whole thing kicks off with Mistfall, a sequel to Full Circle by its own writer, Andrew Smith. The TARDIS flies through a Charged Vacuum Emboitment and ends up on Alzarius a few centuries after the Starliner left, only now the descendants of its inhabitants are back, to explore their ancestral planet — only someone doesn’t want them to despoil it.

I rewatched Full Circle to prepare for writing this review, and I was struck by what a masterpiece of storytelling it is. The ending revelation that the Alzarians aren’t from Teradon, but are evolved Marshmen, is great, as it explains everything we’ve seen before, but places it all in a new context. Mistfall tries to do this, but its explanations about the ecology of Alzarius are just gibberish, answers to questions no-one was asking that don’t really have anything to do with the story being told. Andrew Smith has done some good work since coming into the Big Finish fold, but this revisiting of his old concepts is, alas, not among it. The characters are uniformly flat and uninteresting — or ridiculously over-the-top.

If there’s anything that sinks Mistfall, it’s that it doesn’t mean anything

One does like Nigel Fairs’s score, which feels suitably Kingslandesque, but his sound design never convinces you that the Doctor is actually escorted by a crowd of a hundred people for a large chunk of the story. If there’s anything that sinks this story, it’s that it doesn’t mean anything. There’s a hint of tragedy in the explanation given for how the TARDIS ended up in E-Space, but Nyssa and Tegan don’t react at all to the prospect of discovering the boyhood home of their dead friend, nor does Turlough get to do anything interesting: one can imagine him being curious and probing about Adric in a way that raises the hackles of the others. But this is all dispensed with moments in, and after that, Alzarius may as well be any other planet.

Matt Fitton’s Equilibrium, on the other hand, reminds me of a Christopher Hamilton Bidmead story, in a good way: it’s a story that could fit in among Season Eighteen, without being overly derivative of it. The TARDIS crash-lands on a vaguely Nordic planet whose population — and, indeed, all its energies — are kept in a state of perfect equilibrium. This is one of those stories where, though perhaps it is not perfect, everything coincides perfectly. Fitton’s writing, Ken Bentley’s direction, the sound design and music of Richard Fox and Lauren Yason, the guest cast: everything hits the same note, consistently and with depth.

Equilibrium is a story where everything coincides perfectly

This is a cold world, with a cold society and cold people. Every aspect of the story reflects that, from the clockwork sound design of Fox and Yason to the flinty, regal performance of Annette Badland as Queen Karlina, from the clockwork musical score to the cruel laws of Isenfel society. These are characters with history and depth, from a world that feels alive: I enjoyed spending time in their company. Other highlights included Joanna Kirkland’s sparky Princess Inger and Nickolas Grace (good old Straxus) as Balancer Skaarsgard. The Scandinavian stylings go a long way to giving this story flavour, and the purpose for the world’s cruelty works really well — in addition to setting us up for the next story.

The regulars are on fine form, too; there’s a lovely moment between the Doctor and Nyssa, Tegan gets to do some moral crusading and show off her selfless side, and best of all: Turlough gets a romance with a woman that’s too much for him to handle. If there’s anything to fault, it’s that the ending feels somewhat arbitrary and quick. Having resolved to do one thing, the Doctor doesn’t have to actually do it because someone else has suddenly done something else to remedy the situation. But the story does nicely draw on the themes of Season Eighteen and lead us into the next tale…

Nyssa is at her absolute best in The Entropy Plague: brave, compassionate, and forthright

The Entropy Plague provides an end to the New E-Space Trilogy, and to these tales of Older Nyssa. Now that all is said and done, I think I probably would have preferred Nyssa to just leave at the end of Prisoners of Fate, but that didn’t happen, so let’s not worry about it. If she had to leave later, this was an excellent way to do it: Nyssa is at her absolute best here, brave, compassionate, and forthright, but with her ever-present hint of tragedy. Sarah Sutton gives it her all, and there’s a scene between her and Peter Davison’s Doctor that made me almost tear up. Jonathan Morris does some interesting stuff with the structure of The Entropy Plague, turning it into a tale told to Adric by the Doctor, Tegan, and Turlough, each taking turns. It’s a clever device, giving the story some emotional flavour it might otherwise lack.

The story is, interestingly enough, a vague sequel to both Warriors’ Gate and Logopolis, though I don’t think it quite deals with its implications. That E-Space is overrun with entropy would seem to be a consequence of the events of Logopolis, but The Entropy Plague doesn’t fully track what that would mean. Furthermore, it seemed like the events of this story would have had ramifications for the other denizens of E-Space we met in Mistfall and Equilibrium, yet they go unmentioned. But like Morris at his best, this script is bursting with ideas, and each part piles on new ones, with new repercussions for the characters.

If E-Space had to be revisited, you could do worse than this trilogy. Mistfall was completely pointless, but the other two instalments were solid, taking elements of the old stories and building on them in a satisfying way. If Older Nyssa had to be extended beyond Prisoners of Fate, this was an excellent way of handling it. I have some quibbles with the way that storyline was handled overall, but none of them can be laid at the feet of this particular tale. I love Nyssa, she’s one of my favourite companions, and I’m glad to see her go because The Entropy Plague has done her justice.

But! Colour me disappointed that none of these stories mentioned that E-Space is green, nor do we see it depicted as such on the covers! Tragic.