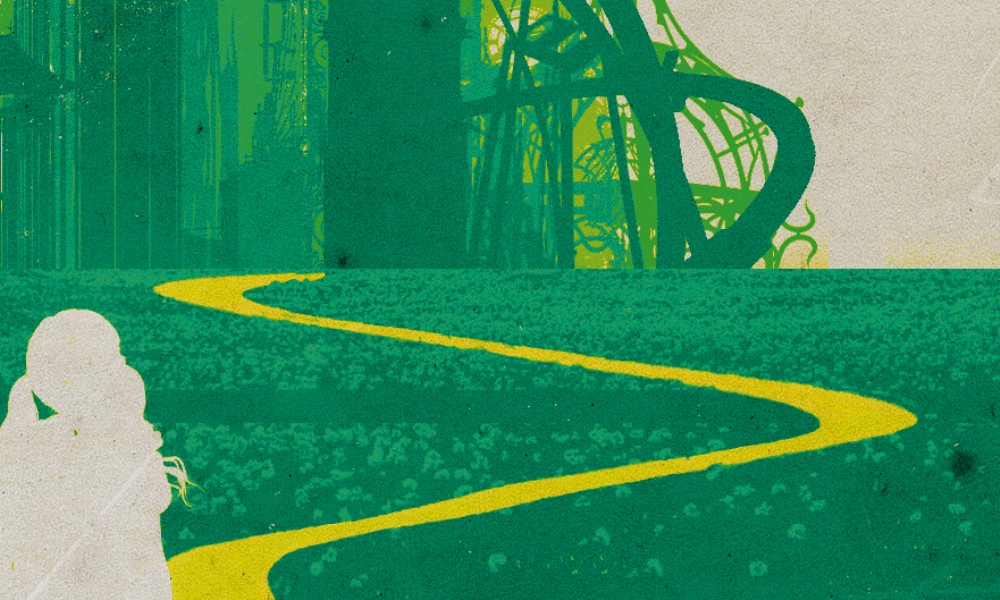 Big Finish keeps on releasing Big Finish Classics editions of books I know a lot about — I guess indicating that “books I know a lot about” has a high correlation to “books in the public domain”. The most recent is The Wonderful Wizard of Oz, based on L. Frank Baum’s original 1900 children’s fantasy novel. Oz was probably my first fandom: I collected all the books as a child, and I remember drawing my own maps of the country and writing out my own timelines (running afoul of the fact that Baum’s approach to continuity was loose at the best of times).

Big Finish Classics often touts itself as providing “faithful” adaptations, but of course concessions have to be made for the change in medium. In an interview in Issue 79 of Vortex, writer Marc Platt said, “I started out trying to be as faithful as possible to the book’s narrative and spirit, but of course, the book wasn’t written as an audio play. It meanders charmingly from one episode to another, a bit like the Alice books, but it needed a bit more structure to work as a play”. In theory, I have no problem with this: but I think Platt’s alterations to Wonderful Wizard don’t work to the story’s advantage, even on audio. Like in the film version, Platt’s solution is to make the presence of the Wicked Witch of the West more pronounced: she’s a villain whose activities hang over the whole story, providing some of the problems Dorothy and her friends encounter on the Yellow Brick Road, and even continuing after her death.

This might work. But here it doesn’t, at least not for me. It’s an overall structure for the story — but not one that I care about. Platt’s alterations transform the story into a power struggle between various witches (and one wizard), with even the “good” witches manipulating Dorothy (and other characters!) to their own purpose. Dorothy doesn’t provide the narrative energy; she’s just a pawn in other character’s actions. This creates more structure, as Platt intended, but it’s not a structure that leads to more investment from the listener: why should I care about which one of these witches is in control of which bit of Oz? Platt’s take loses sight of Dorothy’s dual desires to go home and to treat everyone she meets with consideration, which ought to be the real drivers of the story.

Platt’s shortening and rearranging of episodes of the book also results in key character points going uncommunicated. Here’s a somewhat extended example. After Dorothy and Toto have joined forces with the Scarecrow, the Tin Woodman, and the Cowardly Lion, in the book, they face two key dangers. The first are the fearsome Kalidahs, who the Cowardly Lion holds at bay with his roar while the Scarecrow directs the Tin Woodman to chop down a tree to create a passage across a deep ditch, allowing the travellers to escape. The second is the Deadly Poppy Field, whose noxious gases put the flesh-and-blood travellers to sleep. The Scarecrow and the Tin Woodman seek help; the Woodman spies a Wildcat chasing a field mouse, and feeling sorry for the mouse, kills the Wildcat. The field mouse turns out to be a queen, and she offers her aid to the duo in rescuing their friends; the Scarecrow devises a clever plan involving a cart built by the Woodman and string collected by the field mice.

Platt changes this so that the group escapes and kills the Kalidahs, and then the Queen of the Field Mice shows up to explain they were old enemies of hers, expressing her gratitude. Then, in the Deadly Poppy Field, the flesh-and-blood travellers succumb to its effects. The Scarecrow has the idea to call the field mice for help, who carry(!) Dorothy, Toto, and the Lion to safety.

In Baum, these aren’t just random incidents, but communicate some vital character information: the Scarecrow really is smart, as evidenced by his plans; the Woodman really is kind, as shown by his instinctual rescue of the Queen of the Field Mice; and the Lion really in brave, as demonstrated by his standing up to the Kalidahs. Platt’s version doesn’t really communicate any of this. The Queen of the Field Mice isn’t grateful because the Woodman is kind even though he lacks a heart, but because of a random act of self-preservation. The Lion doesn’t demonstrate his real courage, and the Scarecrow doesn’t demonstrate his real intelligence. It’s a baffling set of changes, and characteristic of Platt’s approach.

Ally Doman does a great job as Dorothy

One of the play’s highlights is in its casting. Ally Doman does a great job as Dorothy, communicating the character’s honesty and determination. She’s obviously not as young as Baum’s Dorothy, but given Big Finish’s track record with either child performers or adults pretending to be children, I’m willing to excuse it. Stuart Milligan, too, does a good job as the Wizard, fulfilling the Western sideshow huckster aspects of the character well. The other highlights were Jacqueline King as the Good Witch of the North and Dan Starkey as the King of the Winged Monkeys, who bring their minor roles to life with charm and humour.

Less successful is the casting of Dorothy’s companions, though I don’t think that can be blamed on the actors, as they are clearly was what Platt and director Scott Handcock were going for. All three are played by British actors, which Handcock gamely defends in Vortex as well: “Dorothy needs to feel slightly out of her comfort zone, after all. […] [Y]ou lose a certain something if everyone around her also has an American accent. It feels as though she hasn’t travelled very far at all.” This is, of course, why all of Big Finish’s audio dramas feature no aliens with British accents, and I’m sure this decision was not prompted by Big Finish’s relatively dismal track record with American accents.

I think all three actors are actually pretty good at what they are being called to do, Dan Bottomley best of all as the Scarecrow (I found him quite charming), but what they are called to do seems to again really miss the point of the original novel. Especially Alex Jordan as the Cowardly Lion, who seems to be doing his best imitation of Christopher Benjamin as Henry Gordon Jago, shouting “lummy!” and “blighter!” a lot. Including these British stereotypes is a weird choice for a book that was pointedly designed as a uniquely American take on the genre of the fairy tale.

Nigel Fairs provides a strong musical score as usual, with some use of the banjo; I liked the majestic “adventuring” theme that was used when Dorothy was carried over the Land of Oz by the Winged Monkeys. On the other hand, it was a little jarring that Fairs used the exact same music to depict the skittering of spiders here as he did in the Doctor Who audio drama Mistfall, and his sound design was sometimes underdone — the opening cyclone apparently being the quietest cyclone of all time!

It’s competently executed, but I fervently wished it had been a little bit different, and a little bit better

The Wonderful Wizard of Oz isn’t a total misfire by any means, but it is a bit baffling, and that includes things I haven’t even discussed here, like Platt’s choice of narration or the way the Emerald City is depicted. It’s competently executed to the usual Big Finish standards, but I, at least, found it hard to get into and fervently wished it had been a little bit different and a little bit better. You might get more out of it if you’re not a hardcore Oz fan who knows the book backwards and forwards, but this Oz aficionado, for one, found it disappointing.