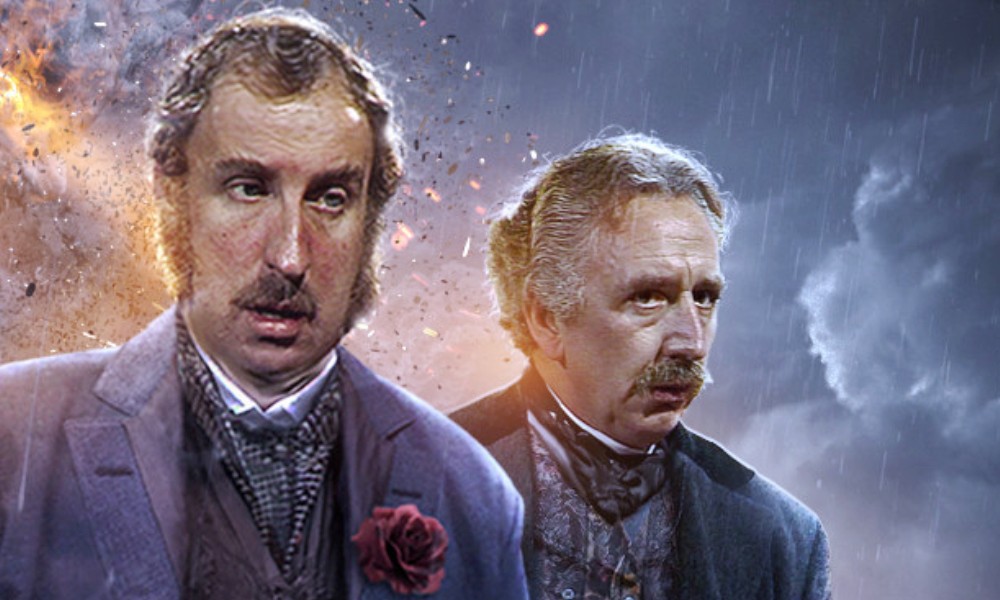 The ending of Series Eight of Big Finish’s Jago & Litefoot promised a new direction for Series Nine: Jago and Litefoot Abroad! Yes, the Investigators of Infernal Incidents have booked a cruise that will take them to Monte Carlo, to a mysterious island, and even into dimensions unknown.

Series Nine includes a number of temporary recurring characters for its duration, since it begins with Ellie and Inspector Quick being left behind in London; Jago and Litefoot are accompanied on their new adventures by David Charles as Mercer, captain of the Fata Morgana; Sarah Badel as the husband-hungry Lady Isobelle Danvers; Dan Starkey (Strax of Paternoster Gang fame) as the retiring Neville Tibbs; and, most pleasantly, Jamie Newall as Aubrey, the ship’s purser, and evidently an ancestor of the producer Aubrey who worked with Jago and Litefoot during their time in the 1960s. The beginning of the first story, Jonathan Morris’s The Flying Frenchmen, is spent introducing these characters to the listeners, especially Lady Danvers, who makes moves on both Jago and Litefoot! Its very much an introduction to the whole set, not the particular story, which takes some time to kick in, but though it feels a bit structurally odd, Morris provides some good comic material for Trevor Baxter and Christopher Benjamin to sink their teeth into.

The Flying Frenchmen gets properly underway when the Fata Morgana is brought into a mysterious fog where movement seems impossible and mysteriously derelicts float, in what felt a bit reminiscent of Edgar Allan Poe’s The Narrative of Arthur Gordon Pym of Nantucket. At first, the story is creepy — but then it takes a turn for the comic when another Fata Morgana appears, this one apparently from a reality where Jago and Litefoot are French! With all the shifts in focus, one might worry the story would feel disjointed, but Morris actually pulls it off quite well: the effect is that of a number of adventures crammed into one, which feels much longer than its mere 53 minutes. A real blast to listen to, and it feels utterly unique in its increasing absurdity. (Though surely the title is a riff on the Flying Dutchman, and thus ought to be “The Flying Frenchman”?)

This is followed by the first of two contributions by series script editor Justin Richards: The Devil’s Dicemen. I occasionally grumble that Richards’s work on the series veers into caricature, but there’s no such trouble here: this is a top-drawer instalment of Jago & Litefoot from beginning to end. Christopher Benjamin is on fine form, especially, as he and Aubrey hit the tables of Monte Carlo while Litefoot investigates (of course) a series of mysterious deaths. Jago’s bumbling gambling successes are a delight to listen to — as is David Warner as the mysterious Doctor Luke Betterman, who aids Litefoot. There’s some good comedy here, as well as a number of a good twists I didn’t see coming and an amazing performance from Miranda Raison. Every box set of Jago & Litefoot seems to have one adventure that executes the formula to perfection, and despite the change of setting, The Devil’s Dicemen is this set’s.

Simon Barnard and Paul Morris are apparently now Jago & Litefoot mainstays, contributing to their third box set in a row with Island of Death. A pastiche of all those “lost tribe” stories where someone finds violent natives carrying out cruel rituals and protecting an ancient treasure, this is enjoyable, but perhaps not enjoyable enough for its 63-minute run time: it feels a bit thin and a bit obvious, and it also depends a little bit too much on coincidence to function. One of the passengers on the Fata Morgana has a connection to the mysterious island, but given the ship is massively off course, that seems like quite a stroke of luck! Still, it’s fun enough, if not up to the standards of the first two stories.

It might seem like the cruise is just getting started, but Justin Richards’s Return of the Nightmare brings the gang back to London for a finale and the mandatory trip to the Red Tavern. Unfortunately, Jago and Litefoot feel like bystanders in this story, listening and watching as other characters explain the plot and make all the important decisions; I’m not convinced that the threads this story draws from the earlier ones entirely make sense, either. And it seems a shame that the makers of Jago & Litefoot felt compelled to return to London — with only four releases per series, it feels a waste to spend one part of the “Jago & Litefoot Abroad” series with Jago and Litefoot not being abroad!

There’s so much one could do with this concept, and Series Nine only begins to scratch the surface

Indeed, probably the best compliment I could pay this series is that it ought to have been longer: it feels like there’s so much one could do with this concept, and that Series Nine only begins to scratch the surface. Imagine Jago and Litefoot in the Raj! As always, the creative team — Benjamin, Baxter, director Lisa Bowerman, sound designer Howard Carter — is on such top form that one almost takes their contributions for granted. Despite its weaknesses, Series Nine carries on Big Finish’s excellent track record with this series in supplying a set of adventures that hit the right balance between familiar formulas and new vistas, continuing to demonstrate that the series formula is much more mutable than one might have ever expected.