Doctor Who: Only the Monstrous review 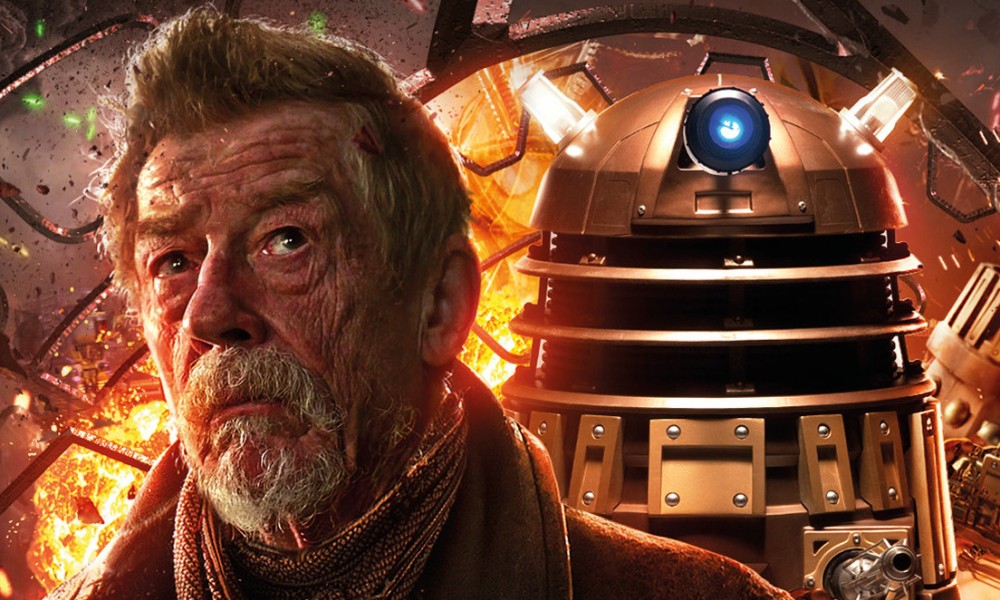 The Time War! Ever since 2005, this era of Doctor Who history has been largely off-limits, revealed only in the slightest of hints. But the fiftieth anniversary special opened things up somewhat with the reveal of the War Doctor, a reveal which was followed up by George Mann’s Engines of War. Now Big Finish is here to further fill in this massive gap in Doctor Who history with the first volume of its War Doctor audio dramas, Only the Monstrous, starring Sir John Hurt. Starring Sir John Hurt! If you can believe it, which I can’t.

Written and directed by Nicholas Briggs, Only the Monstrous is ostensibly three episodes, but they’re all linked, and they end up fitting into two separate stories, so that’s the way I’ll be tackling them. The first, The Innocent, opens with the Doctor (but don’t you dare call him that) coming to the aid of the Time Lords in a massive battle, with a Dalek Time Fleet making a move on Gallifrey. He’s not expected to survive — but of course he does, washing up on the peaceful planet of Keska, where he recuperates with the aid of gentle Rejoice, played by Lucy Briggs-Owen (Carol in The Avengers). It’s a different, quiet story, largely shaped around a series of lengthy conversations between the Doctor and Rejoice that contrast his monstrousness with her innocence — and that of her people, who have escaped an ancient enemy who may be coming back for them. In the meantime, the Time Lords have worked out that the Doctor is still alive, and Cardinal Ollistra — played by Blake’s 7’s Jacqueline Pearce — is eager to have the Doctor back in the fight. It’s a good story, though not a great one, though it does have the occasional standout scene, such as a boating trip taken by the Doctor and Rejoice. In a large part, its function is to set the stage for what comes later, both on this set and in (I assume) future ones, by showing us a Doctor who’s disgusted at what he’s had to become in order to do what needs to be done. Starting Only the Monstrous with this, rather than some pompous war epic, was the right choice.

The second story, The Thousand Worlds/The Heart of the Battle, reunites the Doctor with his Time Lord brethren on a mission behind enemy lines that comes straight out of a World War II film. I don’t mind this — Doctor Who is hardly known for blazing new generic pathways, rather it mashes up old ones — but it does grate that the script has the characters, especially the Doctor, flagging up that they’re all engaging in WWII clichés. Either just do the cliché or subvert it; calling attention to the fact that you’re doing it doesn’t do your script any favours. Anyway, it turns out that the mission the Doctor thinks he’s on is not the one he’s actually on, and he finds himself back on Keska… but the Daleks are seeking peace?

I like the idea of the Doctor forced to be the one not calling for peace, but with the Daleks, it rings hollow

The elements are here for a good story, but they don’t coalesce. I like the idea of the Doctor on a gritty, difficult, behind-the-lines mission with a group of fellow Time Lords, but he just spends all his time weakly snarking at them, and the Time Lords themselves are caricatures it’s impossible to care about: the bossy one, the wimpy one, the other wimpy one. I like the idea of the Doctor forced to be the one not calling for peace, but with the Daleks, it rings hollow as a significant character point for the War Doctor: the Doctor is always being suspicious of Dalek claims to peaceful intentions, including in Briggs’s own Eighth Doctor story, Dark Eyes.

And the end doesn’t quite hit home. The blurb promises “a choice that will define this Doctor, and perhaps forever cast him in the role of ‘monster’”, but the story doesn’t quite deliver on that; the choices the Doctor actually makes here aren’t that different than ones we’ve seen him make in any number of Doctor Who stories, though I can think of ways it might be made to be more monstrous yet still sufficiently Doctor-ish with just a little tweaking. With a sufficiently monstrous moment at the end, the whole set would be justified, I think: it would seem like a “normal” Doctor Who tale and then BAM! you get “the Doctor during the War”. But without it going that far, it ends up being too much like any other Doctor Who story — and moreso than perhaps any other Big Finish release, this one shouldn’t be like any other Doctor Who story.

Foremost among its joys is John Hurt as the Doctor of War: he continues to be effortlessly excellent

It’s not without its joys, though, foremost among them John Hurt as the Doctor of War, a tired man capable of cruelty when the situation calls for it, yet still recognisably the Doctor. Hurt was one of the best parts of The Day of the Doctor, and he continues to be effortlessly excellent here, especially in The Innocent. I like Howard Carter’s music, especially the motif he uses for the War Doctor himself. Jacqueline Pearce is very promising as Cardinal Ollistra, who seems to be the senior Time Lord strategist during this era of the Time War, and I look forward to hearing more of her in future War Doctor box sets (I imagine she will also pop up in The Eighth Doctor: The Time War). Both her performance and Briggs’s writing for her work very well. Survivors’s Carolyn Seymour does a great job, too, in the role the cast list calls “The Slave”: dignified and tragic. Alex Wyndham does a surprisingly good job as the Time Lord Seratrix, elevating what could have been a stock character with the conviction of his performance — and the performance of his conviction.

We get tantalising glimpses of the kind of Doctor Who story only the Time War could bring us, but this first box set doesn’t go far enough for the most part, giving us instead a Dalek story of the sort we’ve been seeing since 1964. Hopefully future instalments prove a little more trail-blazing than this one, as we will in one of the darkest periods of the Doctor’s life.

Only the Monstrous (by Nicholas Briggs; starring John Hurt, Jacqueline Pearce) was released by Big Finish Productions in December 2015.