Doctor Who: The Defectors / Last of the Cybermen / The Secret History review 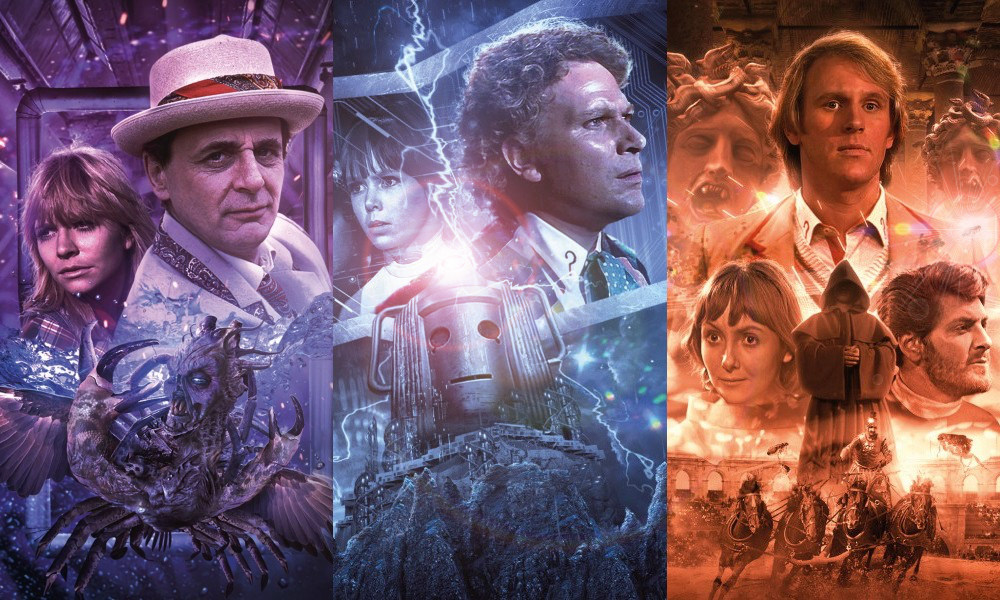 Big Finish celebrates its two-hundredth “main range” release with a special trilogy featuring the Seventh, Sixth, and Fifth Doctors in adventures of the Third, Second, and First Doctors, the whole thing having the ungainly (to this American, anyway) title of “the locum Doctors”, a term I had never heard before. In essence, each Doctor finds himself suddenly translocated into an adventure of his previous self, the idea being to provide some kind of contrast between each of the 1980s Doctors and their 1960s/70s milieus, and allowing into the main range a set of characters who have never appeared in it before: Steven and Vicki, and Jo and Mike (Jamie and Zoe appear too, but already appeared in a few main range adventures back in 2010).

The Defectors just doesn’t feel much like a UNIT tale

The mechanics of the phenomenon are a little inconsistent, plus why the whole thing is happening is a mystery to the Doctor, even though we’re hearing it in the opposite order it happened to him. But the whole thing kicks off with release #198, Nicholas Briggs’s The Defectors, which plunges the Seventh Doctor into a UNIT story. The shortfalls of the idea of creating a contrast become pretty quickly apparent. The first is that the idea of the Seventh Doctor in a UNIT story isn’t exactly novel; the television programme gave it to us in Battlefield, while on audio we’ve had Dominion and Animal. The second is that this just doesn’t feel much like a UNIT tale — the Doctor and Jo are rushed off to a secret base in pretty short order, Nicholas Courtney can’t be in it for obvious reasons, and Mike Yates is barely in it, meaning it’s no more novel than any number of stories where the Doctor must root out some kind of alien oddness.

The Defectors also just isn’t a very interesting story. If I were to describe the plot to you, I think you’d be surprised it somehow manages to stretch out to four 25-minute episodes, as it’s pretty simple; a lot of the story just seems to be biding time, such as an extended jaunt in Episode One where the Doctor and Jo stay in a pub. There’s an ongoing subplot about Jo’s suspicion that this is really the Doctor, but since she never actually acts on this suspicion, it doesn’t go anywhere. The Doctor seems to spend a very long time in an office talking, too. The end of the story gets a little ethically muddled in a way the story is way too quick to gloss over.

Last of the Cybermen by Alan Barnes also suffers from not actually feeling like the era it mean to emulate. Though in some ways it’s very derivative of The Tomb of the Cybermen and other Troughton-era Cyber stories, in others it feels far, far too modern, as it turns into a puzzle-box story that it’s impossible to imagine happening on screen in the 1960s. Of course, I’m all for innovation in my Doctor Who (though this kind of story isn’t very innovative, to be honest), but it the whole raison d’être of this series is to contrast the 1980s Doctors against earlier eras, it seems odd to tell a story that’s only vaguely like ones of the earlier era. The Doctor also flies the TARDIS about under perfect control, which feels incredibly jarring!

Like its predecessor, Last of the Cybermen suffers from not being a very interesting story, either. It’s kind of oddly directed — what ought to be big moments lack impact, and the characters range from dull (a logic-driven woman the exact same as Klieg in Tomb) to excruciating (Lanky the “Comedy” Northern Cyberman). The structure of the story also means that the Doctor ends up being curiously inactive; in Part Four, it seems like he mostly stands there while events resolve themselves. There are some nice moments here and there — the Doctor manipulating Jamie’s impulsiveness was good fun — but there’s not enough of them to justify this undertaking. (Additionally, it’s one of those continuity-overload stories that answers questions no-one ought to have asked, but sometimes he almost pulls it off. The explanation for why the Cyber Controller in Attack of the Cybermen is a bit pudgy made me roll my eyes, but I did like the explanation for an oft-mocked bit of late 1960s set dressing.)

The trilogy wraps up with, thankfully, its strongest instalment in Eddie Robson’s The Secret History. Robson is an author I enjoy a lot who never turns up in the Big Finish schedules often enough; this is his first Doctor Who audio since the excellent 1963: Fanfare for the Common Men. Robson gets the balance exactly right between old and new. For its first couple parts, this is a perfect evocation of any number of Hartnell historicals: the Doctor, Vicki, and Steven land in Ravenna during its conquest by the eastern Roman Empire. Of course, they get separated and hijinks ensue: while the Doctor and Vicki accompany the General Belisarius and his legal advisor, Procopius, Steven ends up working in a chariot arena in Constantinople to make some money, this latter plotline featuring some good comedy.

It’s a classic 1960s set-up, which is fun: this is like The Romans or The Aztecs or Marco Polo or what-have-you, and it’s lovely as ever to hear Steven and Vicki in action. And though I of course dearly love The Companion Chronicles, it is good to get the occasional full-cast story that can feature both Maureen O’Brien and Peter Purves at once. Adding to this are a set of strong performances as historical characters: Lysette Anthony as the idealistic and otherworldly Sophia, Tony Millan as the long-suffering Procopius, and Giles Watling as the cynical and straightforward Belisarius are the particular highlights here. Probably the usual excellent casting instincts of director Barnaby Edwards are to thank here.

But this isn’t total pastiche, as it becomes clear that someone is manipulating the events of the story — and, in fact, those of the previous two as well — to their own ends, meaning this isn’t quite the straight historical it seems at first. Additionally, this story is the best at drawing the contrast between the “locum” Doctor and the Doctor he’s replacing, with the Fifth Doctor coming up against a difficult ethical dilemma with no easy way out, and then the whole story makes a big swerve as you realise what you thought you were hearing is not what you are hearing.

It’s a classic 1960s set-up, and it’s lovely as ever to hear Steven and Vicki in action

There’s the return of one of Big Finish’s better recurring characters, played as excellently as ever. This is the first time we’ve heard him since 2011, and I hope we don’t have to go another four years before hearing him again. (Though it might seem weird for the story celebrating the two-hundredth instalment of the main range to be a sequel to a four-year-old story from a totally different range, I think The Secret History pulls it off very well. If you’ve heard that earlier story, it’s a nice bonus, but I don’t think you’d lose anything if not.) He’s a character who mixes tragedy with comedy in a really effective way, especially here.

It’s sort of an odd set of tales to commemorate the main range with, as they feature characters we don’t normally hear from there, and in ways that are not by and large terribly effective. There might be some more novelty if this was 2005 and there were no opportunities to hear from Steven, Vicki, Jamie, Zoe, Jo, and Mike on audio, but ten years later, The Companion Chronicles, The Lost Stories, The Early Adventures, and The Third Doctor Adventures have kept these characters in the spotlight, meaning their return isn’t innately the event it might have been. Bringing them back means these stories ought to do something interesting with the contrast, but only The Secret History succeeds on this score. Fortunately, these tales are pretty loosely linked: if you only buy one, get The Secret History, as it’s quality and you won’t regret it, but give the other two a miss.