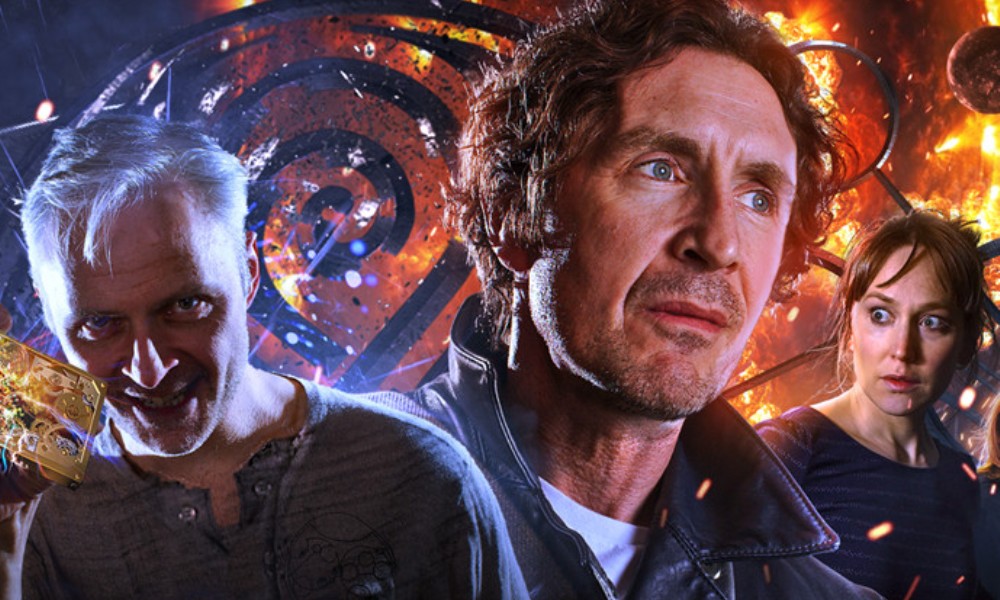 Dark Eyes pioneered a new format for Big Finish’s Doctor Who storytelling: a succession of four-disc box sets, adding up to one story in 16 parts. This had its ups and downs, as Dark Eyes leaves the listener with the definite impression that the whole thing was made up as the writers went along. Understandably, to a degree, as Dark Eyes 2 wasn’t even supposed to exist until the original Dark Eyes was a success, but given that volumes 2, 3, and 4 were commissioned all at once, it’s odd that they still don’t quite add up to a proper story.

Doom Coalition gives Big Finish the chance to try the Dark Eyes format over again, and do it right this time

Doom Coalition gives Big Finish the chance to try this format over again, and do it right this time. Though Doom Coalition 1 is very much only the first part of a larger story, it’s the first part of a larger story that knows this is the case. In addition, Doom Coalition has a format that seems to allow for more flexibility: the Doctor is trying to chase a new Time Lord villain called the Eleven down throughout history, meaning that these stories can go anywhere and anywhen and have standalone plots, unlike in Dark Eyes, where everything had to somehow come back to the Dalek Time Controller/retrogenitor particles/the Eminence.

The whole set gets off to a strong start with The Eleven, which reintroduces the Eighth Doctor and Liv Chenka, and introduces the Eleven plus a cast of Time Lord characters who I assume will factor into events to come. The Eleven is a jailbreak story, centring around the Eleven’s attempt to escape captivity on Gallifrey, while the Doctor and company work to stop him. By and large, it moves at a fair clip, with the Doctor almost always a step behind his adversary. Though some aspects of the plot seem a bit contrived (there are a lot of dumb Time Lord protocols for the Eleven to exploit), writer Matt Fitton manages to make them work anyway (the Time Lords have a real history of dumb protocols on screen).

The set gets off to a strong start with The Eleven

What could have been banal in other hands is raised by the writing of the characters and the performances of the guest cast. Lady Farina is the latest in a succession of Celestial Intervention Agency nitwits to face the Eighth Doctor (see also: Vansell in Neverland, Straxus in Human Resources et al., Narvin in Dark Eyes 3), something the Doctor himself actually points out, but Caroline Langrishe imbues her with a delightful arrogance. Bethan Walker’s Kiani might be a little clichéd, too, but similarly the actress makes her fun and interesting to listen to — and Fitton keeps us guessing about her. Robert Bathurst (known to me as the fellow who jilted the boring Crawley sister at the altar in Downton Abbey) is a real highlight as Cardinal Padrac. As an old Time Lord friend of the Doctor’s that we’ve never seen before, he fits into a cliché that goes back to The Deadly Assassin and Arc of Infinity, but the character is fun, and Bathurst imbues him with a level of humanity that makes it plausible the Doctor would be friends with him.

Mark Bonnar makes a strong debut as the Eleven, a villainous Time Lord who with each successive regeneration gains a new personality — but doesn’t lose the old ones. Now there are Eleven of him, and he’s out for… something. Bonnar does a great job of performing 11 different voices, and in being threatening in an entirely different way than the Master. His scenes with Liv are especially a highlight.

The story continues with John Dorney’s The Red Lady, which is surely the best Eighth Doctor story Big Finish has given us in years. In pursuit of the Eleven, the Doctor and Liv arrive at the British Museum in 1963, where a clue is encoded in an old stone tablet. But that’s not all that’s going on: the museum has recently acquired a new collection of art from across history, all of which somehow depicts the same figure, a Red Lady. The story that follows is a tour-de-force of audio horror; I can’t remember a Big Finish story that scared me this much in a long, long time. Dorney conspires with director Ken Bentley, sound designer Wilfredo Acosta, and the talented cast to make people describing paintings they’re looking at the most terrifying thing you’ve ever heard.

I know I complained in my review of Dark Eyes 4 that the excess of recurring characters in those stories made it hard to find space for interesting and compelling guest characters in each story. Thankfully, Doom Coalition 1 manages to overcome this throughout: like The Eleven, The Red Lady features a great cast of characters, all of whom manage to bring what could otherwise be forgotten parts to life, especially David Yelland as Professor Walter Pritchett. The story is also the debut of Hattie Morahan as new companion Helen Sinclair. It’s almost a shame that the publicity and covers had to give it away that she was a companion, because it’s an almost perfect companion introduction. It’s not beaten into your head that she’s perfect companion material; rather, she slowly demonstrates this across the course of the story so that by the end, you know you want her to come aboard the TARDIS. As a historian (I think) from the 1960s, Helen is smart and accomplished and enthusiastic — the perfect combo for a companion, and Morahan plays her perfectly. After missteps like Flip and Brewster and Will, it’s nice to see Big Finish get a new companion exactly right after one try.

Like a lot of Marc Platt scripts, The Galileo Trap is striking, strange, and considerate

Following from this, the TARDIS ends up in Renaissance Italy for The Galileo Trap. Like a lot of Marc Platt scripts, this one is striking, strange, and considerate. All the principles get plenty to do, and once again, the guest cast is better than the story requires them to be, to be honest. John Woodvine (the Marshal in The Armageddon Factor and Bob’s dad in Bob & Rose) is absolute fabulous as Galileo, an old man whose best days are behind him, but who still knows a thing or two — he’s a cantankerous old genius, after all. Esther Hall shines as his daughter, Sister Virginia, and Bernice Summerfield’s Harry Myers appears as a bestial alien that is somehow nothing like Adrian Wall despite some surface similarities. Even Gunnar Cauthery shines with personality in the generic part of a security cyborg! These characters and their conflicting, complicated motivations add up to make The Galileo Trap a story that would have been a standout in any set that didn’t already contain The Red Lady, unfortunately for it. (Unintentional guest star highlight of the story: John Banks appears as two different characters, who are the only characters in one scene. Listen to him shout at himself!)

I am left a little apprehensive, however, by the final story in the set, The Satanic Mill by the mysteriously unknown Edward Collier. This story brings the Eleven back into focus, but in a way that doesn’t really deliver on the potential of the character from The Eleven. Here, he has a great and complicated scheme that seems almost note-for-note like one Alexander Macqueen’s Master could have had. And though this story features a great guest character in Matthew Cottle’s Payne, he actually feels very derivative of a character in Castrovalva — and it’s obvious that most of the cast budget was spent on the other stories in this set, because he’s virtually the only guest character. The climax is especially disappointing; bigger things are hinted at, but the story is resolved through some previously-unindicated technical wizardry, with nothing at stake emotionally for our characters. While the Eleven seems like he has the potential for some interesting stories, hopefully future instalments deliver on that potential in less generic fashion than The Satanic Mill.

Big Finish has had a number of natural stopping points for the Eighth Doctor in the past couple years: one could easily have imagined the damaged Doctor of the end of To the Death going off the fight the Time War; ditto for the Doctor at the point he reached at the end of the original Dark Eyes. Both of those brought the Doctor to points where it seems like Doctor Who as we know it could have broken down and become something darker and bleaker. But TV’s The Night of the Doctor showed us that that didn’t happen, that the Doctor fought to maintain his optimism until the very end of his eighth life. Given that, the later Dark Eyes sets had to pull back from the darkness and return us to the joyful Eighth Doctor we used to known, even if he has been tempered a bit by the increasingly dark world he’s moving through.

As a result, I think Doom Coalition 1 is the best showcase Paul McGann has had as the Doctor in a long time. He gets to display a lot of different modes here, from righteous indignation to jubilant adventurer, from cunning trickster to unwilling trickster, from master of his domain to fearful explorer. There are any number of great, small moments for him here, from his penchant for terrible puns no-one gets, to his agonising pain at the hands of the Eleven. And, of course, Nicola Walker continues to delight as Liv Chenka. One thing I liked about Mary Shelley as a companion for the Eighth Doctor was that he was a spirited contrast to her moroseness, and even with a new lease of life for Liv, that dynamic is in play here, too. Walker manages to make Liv happier without overdoing it, and her cynicism is always tempered by her compassion. I like the contrast she has with the naïve Helen, and I look forward to hearing the two of them develop their relationship in future sets.

All in all, Doom Coalition 1 is a great new start for the Eighth Doctor, and a great jumping-on point, too. If future instalments can work out the kinks, this 16-part story will be something special.