Doctor Who: The Sixth Doctor: The Last Adventure review 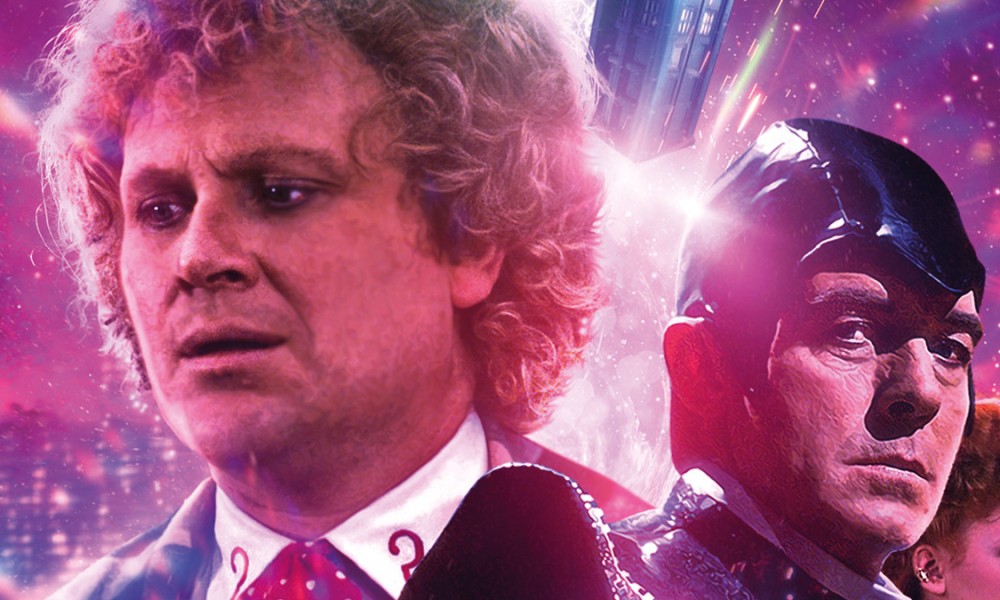 Doctor Who fans like to have their gaps filled: how did Mel come aboard, where did Ace go, when did the Eighth Doctor regenerate. One long-existing gap in the Doctor Who canon has been the regeneration of the Sixth Doctor. Yes, Time and the Rani begins with the regeneration, but it had two major defects: there’s no real explanation as to why this regeneration happened (did the Sixth Doctor just bump his head?), and Colin Baker doesn’t appear in the scene. It’s just Sylvester McCoy in a wig!

Big Finish’s newest ridiculously-priced “special limited edition” is designed to fix that problem. The Sixth Doctor: The Last Adventure contains four one-disc stories building up to a regeneration that leads into Time and the Rani. The first three aren’t about the regeneration per se, but they do feature the Valeyard, that mysterious evil future kinda-Doctor, turning him (with the assistance of Trial of the Valeyard) into a recurring villain throughout the post-Trial period of the Sixth Doctor’s life.

The set begins strongly, with Simon Barnard and Paul Morris’s The End of the Line. Barnard and Morris are best known for their more comedic work in The Scarifyers and Jago & Litefoot, so it’s fun to hear them tackle a more serious story here. Though it has its moments of levity, this tale of a train full of passengers suddenly becoming lost in a mysterious foggy environment is fundamentally a horror story, a spooky tale of a lost group of travellers. Barnard and Morris, along with director Nicholas Briggs and Howard Carter, do a good job of ratcheting up the tension in this one, as… something keeps coming for the train passengers. The end of the tale features a couple of solid twists, too, which I did not see coming, but ran a fannish little chill down my spine. (Also, I think there’s a tie-in to UNIT: Dominion, but I’m afraid I don’t remember that story well enough to be certain!)

The End of the Line is also solidly well-cast. Anthony Howell is in it, and you can bet that his character is awesome; he’s always guaranteed quality for me at this point. But there are a number of other fun characters here: Chris Finney as Keith Potter, trainspotter… and something more besides, Ony Uhiara as Alice Lloyd, ordinary, boring woman caught up in terrible events, and the delightful Hamish Clark as Norman — who is definitely not a ticket collector. Furthermore, this story features the debut of Miranda Raison as Constance Clark, whose introduction we will be hearing in a couple of months in Criss-Cross. Based on this story, I am looking forward to it: Constance is fun but no-nonsense, definitely a product of her World War II origins. After the aberrations that were Flip and Will, this might be a return to Big Finish’s streak of quality original companions.

It might be an understatement to say that I’m a big fan of India Fisher’s Charley Pollard, so I was really looking forward to her return in The Red House by Alan Barnes, set during her adventures with the Sixth Doctor (specifically, between Brotherhood of the Daleks and Return of the Krotons, fact fans). There are a couple of good invocations of Charley’s supposed amnesia from this time period — and I also appreciated the fact that 14 years after he created the character, Alan Barnes finally explains why she calls herself an “Edwardian adventuress” even though she hails from the reign of King George V. The Red House features the Doctor and Charley landing on an island of werewolves… sort of, and it has some interesting concepts, though in true Alan Barnes fashion, many of them are revealed by characters just telling them to our heroes in two big chunks of exposition that are happening simultaneously. It’s a little bit substanceless, but it is fun — werewolf culture turns out to be a little bit delightful.

The next adventure, Matt Fitton’s Stage Fright, reunites the Sixth Doctor (travelling with Flip) with his friends Jago, Litefoot, and Ellie, on the trail of a mysterious man named Yardvale. Victoriana is a perfect setting for the Valeyard, and his love of the macabre and of goofy disguises recalls the last two parts of The Trial of a Time Lord perfectly. This story delves into who the Valeyard is more than any other story in the set, playing with the idea that he’s a future Doctor and that he’s a dark reflection of our shining hero. Jago and Litefoot might be somewhat superfluous, but it’s fun to hear them as always, and the Valeyard’s plan does depend on some old friends of the Doctor being nearby, so why not them, given that they’re just as much companions of the Sixth Doctor as any of the other ones in this set. (No hints as to when this is set for them, though, as far as I could tell, other than necessarily sometime after Return of the Repressed in Series Six, I think.)

Lisa Greenwood’s Flip has never been a companion that interests me, and I think this story shows why: the end is supposed to feature a big character moment for her, an act of total bravery, but the story doesn’t really sell you on it. I never felt like she was doing something exceedingly brave, and I don’t think I would have even taken it that way except that the Doctor said it was so. On the other hand, I did enjoy her Star Wars jokes.

The whole set comes to an end with Nicholas “I love writing endings” Briggs’s The Brink of Death. Briggs has an unenviable task in trying to make the end of the Sixth Doctor’s life epic while still leading into Time and the Rani, but I think he mostly succeeds. While travelling with Mel, the Doctor suddenly finds himself trapped in the Matrix, and the Valeyard has taken over his life. With the help of a Time Lord technician, he has to work out what’s going on. The way that the tension ratchets up as the Doctor is increasing danger of being deleted from the Matrix is well done, and Liz White is an utter delight at Genesta, the Time Lord technician who once spent some time in the north. If it’s possible, I hope we hear from her again someday, as she was a great faux companion for this tale.

The tension ratchets up as the Doctor is increasing danger

The story was slightly undercut by its ending for me, which — trying to avoid spoilers too much — repeats a technique that Nick Briggs has employed in his writing about five times too often. If I hadn’t heard it in those other stories, I would have been find with it here, but as I have, I rolled my eyes when it came up. Which is a shame, because it’s actually a clever way for this story to have scale a regeneration requires while still fitting into the beginning of Time and the Rani. The reappearance of some sound effects from that story gave me chills, and the actual regeneration is pretty good. It’s no The Caves of Androzani or The Parting of the Ways, but it does its job well.

As mentioned above, Howard Carter handles the sound design for this set, and he does a great job throughout, though especially in the doom-laden atmosphere of The Brink of Death. The way he uses silence and sudden thuds (there’s probably some kind of technical term for this) are excellent; every time the Doctor finds himself back in the Matrix is well done, but Carter succeeds throughout the whole set.

If you wanted one reason to listen, the regeneration would be it. If you wanted a second, it would be Michael Jayston as the Valeyard

If you only wanted one reason to listen to this set, well I guess the regeneration would be it, but if you wanted a second, it would be Michael Jayston as the Valeyard. I’m an unrepentant fan of The Trial of a Time Lord, and Jayston is a big part of the reason for that. I love his sparring with the Doctor, his delicious sneering, his ethereal taunts within the Matrix. I was always disappointed Big Finish never did much with the character, but here he’s on top form, taunting the Doctor as he unfolds a complicated plan across time and space. If there’s any disappointment to be had, it’s that we still don’t really have any insight into his origins, but I suppose Big Finish can always come back to that when they get Matt Smith in some day. Hearing Jayston finally get his due as a villain is worth every penny, and this set transforms him into the definitive villain of the Sixth Doctor’s era.

Finally, there’s Colin Baker. Big Finish has transformed him from being at the bottom of the list of the Doctors to near the top — or, if you’re like me, he’s always been near the top of your list because you heard stories like Jubilee and Davros long before you were exposed to The Twin Dilemma and Timelash. Colin never gives a bad performance as the Doctor, and Big Finish has shown his dramatic range better than the television series ever could, from the tragedy of Arrangements for War to the helplessness of Patient Zero, from playing Davros in The Curse of Davros to playing himself twice over The Wrong Doctors. Colin is just as good as ever in The Sixth Doctor: The Last Adventure, as brave, as loud, as comforting, as direct as he’s ever been.

Big Finish turned Colin Baker into one of the greatest Doctors, and that created an emotional reason for this set to exist

Doctor Who fans do indeed like their gaps filled, but if wasn’t for Colin Baker’s time at Big Finish, it’s hard to imagine that there really would have been a call for this set — it would have just been a box-ticking exercise, the last unseen regeneration. But Big Finish turned Colin Baker into one of the greatest Doctors, and that created an emotional reason for this set to exist. The more we grew attached to the Sixth Doctor, the more cruel it seemed that his exit was so perfunctory. The set itself is not the Sixth Doctor at his best, but neither does it depict him at his worse. These are four solid stories featuring the Sixth Doctor across the span of his life, and every one of them is an enjoyable, well-spent hour. But this set’s very existence is a loving tribute to one of the very best men to play the part.