Doctor Who: The Widow’s Assassin / Masters of Earth / The Rani Elite review 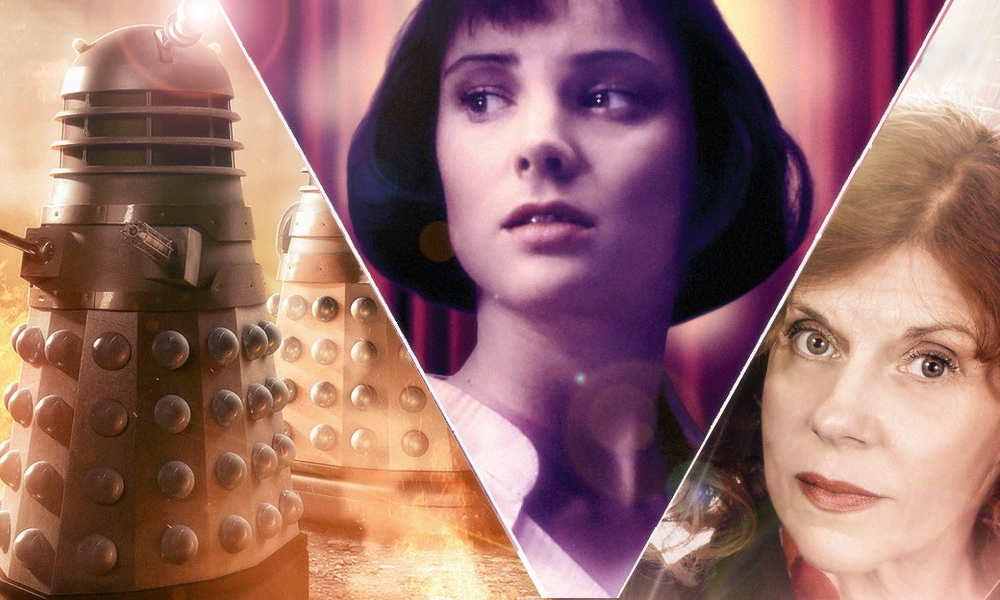 Big Finish have been producing their monthly Doctor Who releases in the form of trilogies for quite a long time now. The first instalment of The Key 2 Time trilogy dates to January 2009, and in the six years since then, all but one release per year has been part of a trilogy. This process has had its highlights — the original Klein trilogy is one that springs to mind — but also has its limitations. Big Finish’s last trilogy for 2014, reuniting a post-The Trial of a Time Lord Peri Brown with Colin Baker’s Doctor, shows up some of these limitations, I’m afraid.

The first story is The Widow’s Assassin by Nev Fountain, who made some teases about the fate of Peri a few years back in Peri and the Piscon Paradox and finally gets to deliver on them here. The Widow’s Assassin is pretty much a direct sequel to Parts Five through Eight of The Trial of a Time Lord (also known as Mindwarp), which surprised me: the Doctor turns up to attend Peri’s wedding to King Yrcanos, and things go downhill from there as he is locked in jail, though disappointingly, BRIAN BLESSED fails to appear.

The Widow’s Assassin is an enjoyable story, and a satisfying answer to “What Peri Did Next”

At first I was somewhat uncertain about this tale, but Nev Fountain was playing a long game, and at the end of Part Two everything slotted into place beautifully — a number of elements I’d thought goofy and/or implausible were explained, and a menace I had not been expecting but was perfect for the story made its appearance, along with a delightful cameo of a character from Mindwarp. Unfortunately, Part Three eventually dials back on this for reasons that weren’t really clear to me, replacing the menace with an original one I didn’t find very effective. Rights reasons, perhaps? It just took a great moment and undermined it.

Where The Widow’s Assassin becomes the weakest is just unavoidable due to the trilogy format: the story introduces tension at a couple of points as to whether or not Peri will survive. Well, as you and I know that she’s due to appear in Masters of Earth and The Rani Elite, this tension is completely ineffective, which is really unfortunate, because I think the stakes in The Widow’s Assassin could have been quite high.

Still, this is an enjoyable story on the whole, and a satisfying answer to “What Peri Did Next”. (And there are quite a few of them about these days!) The typical Nev Fountain comic flourishes are here too, and as usual I enjoyed them, except I felt that the “Guard One” and “Guard Two” gag went a little too far with the actual names of the guards, and stopped you from liking them as characters quite as much as I would have liked. The relationship the Doctor had with his jailers is what ought to have happened in Prisoner of the Sun, in my opinion. Andrew Dickens and John Banks do a great job with the characters; I also really enjoyed Tim Chipping as Constable Wolsey.

Masters of Earth reminds one of Terry Nation’s Survivors

The rest of the trilogy is, however, somewhat weaker, and again, it’s due to the very premise of the trilogy. There is essentially nothing that happens in Masters of Earth and The Rani Elite that could not have happened in a Peri trilogy set before The Trial of a Time Lord. Now, this is accurate — given the nature of her experiences in The Widow’s Assassin — but it does make you wonder why do a whole trilogy about “Older Peri”? Masters of Earth and The Rani Elite could have been solid pre-Trial tales, and The Widow’s Assassin could have been a great standalone story.

Aside from these concerns, however, Cavan Scott and Mark Wright’s Masters of Earth is a solid story. I get a little wary when Big Finish play too much with Doctor Who’s history rather than build their own (and, indeed, all three instalments of this trilogy are sequels… as are all three instalments of the next trilogy!), but Masters of Earth makes it work by putting a different twist on a familiar genre: despite taking place in the twenty-second century, this is definitely a historical. Masters of Earth places the Doctor and Peri in the Dalek occupation of Earth, over a year before the Doctor would turn up to defeat it: it’s like The Reign of Terror or The Highlanders, one of those stories where the TARDIS crew gets separated from the TARDIS and must navigate not interfering in the bleak events of history while getting back to it. But, you know, with Daleks!

It’s a lot like World War II, actually; were the Doctor to pop up in Nazi-occupied France, there would be little he could do about it, and the same is true here. In Dalek-occupied Scotland, the Doctor and Peri encounter rebels, collaborators (i.e. Robomen), and those who just want to stay out of the way while fighting for their lives. Scott and Wright do a good job of keeping the story moving along as it goes. The TARDIS team and their associates are basically never given a moment to breathe, hurtling from danger to danger, from Dalek work camp to Varga plant field. They meet a varied group of survivors during all this, Harry Potter’s Sean Biggerstaff and Counter-Measures’ Hugh Ross being my favourites. There are a couple of good twists to boot, the kind that are foreshadowed in plausibly misdirecting ways.

If The Rani Elite is all Big Finish could come up with for the Rani, they would have been better off leaving the character alone

In the past I’ve thought Martin Montague’s done a good job with the sound design on Counter-Measures, which calls for a bit of a historical ear, which makes him a good fit for this story too — he has to recreate sounds from classic television stories like The Dalek Invasion of Earth and The Daleks’ Master Plan while coming up with new sounds that fit in. Montague excels as usual, not just in recreating the old, but in heightening that feeling of desperation that drives this release. Nicholas Briggs’s music is perfect, too; he always does a good Dalek score. Masters of Earth isn’t a classic, but it is enjoyable way to spend a couple of hours, with a neat twist on some old Doctor Who tropes (and, quite appropriately, it reminds one of Terry Nation’s Survivors).

The final story in this trilogy is The Rani Elite by Justin Richards, featuring Siobhan Redmond as a new incarnation of the Rani, apparently after the events of Time and the Rani (and, one supposes, The Rani Reaps the Whirlwind, not that I ever expect to hear that story acknowledged). People have been requesting the return of the Rani as long as there’s been a Big Finish… but if this is all Big Finish could come up with for it, they would have been better off leaving the character alone. The Rani Elite is two hours long but has enough plot for one hour at most; I felt like most of the running time was taken up with the decades-old-and-decades-dull Doctor Who routine of capture-escape-corridor-capture-escape. A number of implausibilities drive the plot; the Doctor and Peri manage to accidentally wander into the Rani’s secure facility on multiple occasions, and blurt out suspicions to the very people they find suspicious! The guest characters are flat and dull, and a key plot point here is one Peri just experienced in The Widow’s Assassin (Justin Richards tries to make this into a virtue, but doesn’t succeed). Redmond’s Rani has potential, but she doesn’t get much interesting things to do, and she’s nowhere near as over-the-top as Kate O’Mara’s. I hope her return in Planet of the Rani delivers on the potential of the character.

And more even more than in Masters of Earth, this story could slot in before The Trial of a Time Lord with the changing of about one line of dialogue. Which is a real shame, because there could have been something really compelling in an older Peri visiting a space college. Peri, you will recall, postponed her college degree in Planet of Fire to travel with the Doctor, but never actually finished it, and now probably never will. She was 18 in Planet of Fire, and she must be at least 24 by this point given the events of The Kingmaker and The Widow’s Assassin, and probably even older given how many Peri audios, novels, and comics there are. What’s that like for her? Is she tempted to go back to college? We’ll never know, because when Justin Richards thinks of continuity, it’s to slip in a number of groan-inducing references to some of the worst ideas of the 2000s novel continuity.

This is an okay set of main range adventures — we’ve certainly had worse of late! — but it feels like squandered potential. I’d’ve liked The Widow’s Assassin and Masters of Earth both even more outside the format of this trilogy, and The Rani Elite could have been so much more than it was. Switch it up, Big Finish!