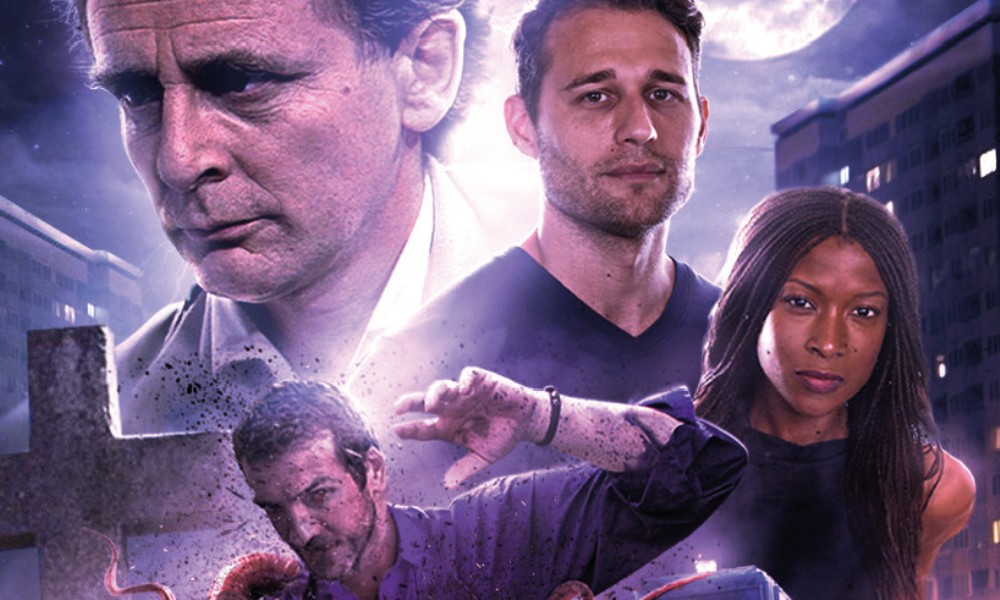 I am a big fan of Russell T Davies’s writing. Not just Russell T Davies’s Doctor Who writing, but Davies’s writing in general. Thanks to encountering him on Doctor Who, I ended up getting into Queer as Folk, The Second Coming, Casanova, and what is possibly one of the best pieces of television ever produced, Bob & Rose (the end of Episode Four never fails to make me tear up). I definitely miss his voice in Doctor Who.

So it was with keen anticipation that I awaited Damaged Goods, Jonathan Morris’s adaptation of Davies’s 1996 New Adventures novel, Davies’s only foray into prose, which I’ve never read. What sort of fascinated and surprised me upon listening to it is how different it was from Davies’s Doctor Who television work. This wasn’t written by the Davies who wrote Aliens of London, Bad Wolf, Doomsday, or The Waters of Mars, this was written by the Davies who wrote those other television dramas that I love, Queer as Folk, The Second Coming, and all the rest. This isn’t Davies’s big, bold stories with enormous canvasses; this is a version of Doctor Who that goes into the homes of people like us, wonderful but ordinary people with awful but ordinary problems.

What makes Damaged Goods work is how grounded it all feels. The Doctor gives a wonderful speech in Part One about how he can just swan into command centres, but a housing estate is a succession of impenetrable fortresses because he has no excuse to be entering into people’s homes. Basically every character here feels like a real person in the best Russell T Davies tradition, all of them coming together between Davies’s writing, Morris’s scripting, and the acting; there’s not a duff one in the lot. Michelle Collins as Winnie Tyler is a struggling single mother who made one bad choice, while Daniel Brocklebank as David Daniels is an earnest guy trying to find love in a society that makes it difficult, and even Damian Lynch as Mr Thomas turns out not to be crude thug but a well-meaning, helpful guy.

The real highlights for me — among this excellent cast of characters — were Denise Black as Eva Jericho and Georgie Fuller as Bev Tyler. Denise Black, who was fabulous in Queer as Folk, here plays a woman whose son is beleaguered with a devastating medical condition, and acts as she sees best to help him. In the best Russell T Davies tradition, she does absolutely awful things in an attempt to help him — things you totally understand the emotional logic of even as you are repulsed by them. This makes for a couple really effective scenes, ones that make you recoil as you listen because of how emotionally harsh they are even if other Doctor Who audio dramas have featured stuff that’s technically more gruesome. Georgie Fuller’s character is the emotional heart of the play, her narration linking together some of the big moments, and her interactions with Sylvester McCoy providing a grounding throughout, humanising one of the most cosmic of Doctors.

All the “regulars” are all strong form here, too: I think that as an actor Sylvester McCoy is really dependent on the material you give him, and the difference in performance between the Doctor in The Highest Science and the Doctor here is staggering. This is McCoy at his Season 26 best, his mind on bigger things still having time for the emotional and the local, alternating between jovial and menacing. Yasmin Bannerman and Travis Oliver play — for the first time — companions Roz Forrester and Chris Cwej. I’ve read some of the books that feature them, but not many (Sky Pirates!, Just War, SLEEPY, Christmas on a Rational Planet, and Bad Therapy, if you’re interested), and from what I remember, they capture those characters. More importantly, despite their somewhat limited roles, they “pop” here: they feel like fully formed people in a way that even Big Finish companions we’ve actually heard origin stories for do not. I look forward to hearing more from them in future Big Finish novel adaptations.

Sylvester McCoy is at his best, alternating between jovial and menacing

Obviously much of the brilliance of this story is down to Davies’s original novel, but I’d be remiss if I didn’t praise Jonathan Morris; it’s obvious from the extras and interviews with him in Doctor Who Magazine that he was incredibly thoughtful about translating this prose story into a new medium, and his attention to the detail of Davies’s pre-Doctor Who television work is a large part of why this feels so much like a Davies television production.

Howard Carter is one of the more dependable members of Big Finish’s stable of sound designers / music composers, but I feel like I rarely have reason to overtly praise his work. Well, I do here. He really captures the groundedness and the grittiness of the Quadrant, while also providing a lovely piano theme that recurs throughout the story, pulling together its emotional themes; this release’s music track will be getting many plays on my iPod, I’ve no doubt.

Much has been made of the alternations made to uncouple this story from its 1996 story arc origins, but you’re better off discovering those moments for yourself. They’re good ones, though; tasty little bonuses in an excellent story.

This is Doctor Who as it ought to be

Damaged Goods is strikingly good, a story I find it incredibly difficult to take any fault with. I have been a bit sceptical of Big Finish’s decision to get into the adaptations business, but if they’re all as good as this (or the recent Gareth Roberts trilogy), then I hope Big Finish keep them coming for a long time. This is Doctor Who as it ought to be: the real colliding with the unreal with devastating results.

(I do have to recommend the “extended extras” on download if you can get them; listening to Russell T Davies talk about his work is always worth the price of admission — I hadn’t realised how much I’d missed him, hooray! — and Jonathan Morris’s insights into the adaptation process are also very interesting. On the other hand, hearing director Ken Bentley explain how unusual it is for guest characters in Doctor Who audio dramas to have actual emotional arcs is sort of a depressing statement on what Big Finish has been up to over in the main range.)