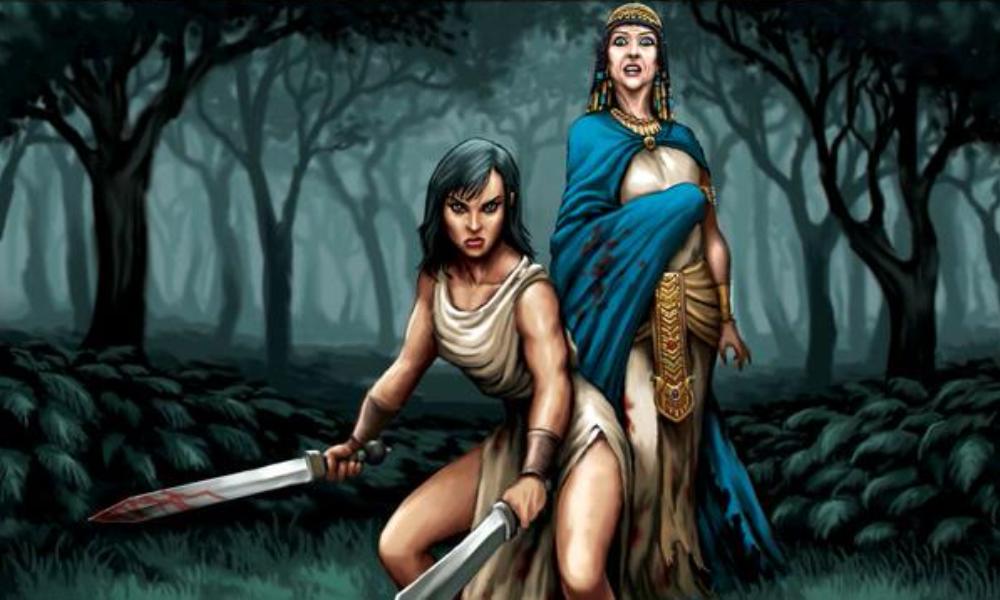 Erimemushinteperem, a.k.a. “Erimem” for short, travelled with the Fifth Doctor and Peri in Big Finish Doctor Who audio dramas from 2001’s The Eye of the Scorpion to 2008’s The Bride of Peladon. Played by Caroline Morris, she was the third of Big Finish’s original companions. Originally a would-be pharaoh from ancient Egypt, she hobnobbed with royalty like Emperor Constantine of Rome, King Richard III, and Prince Vlad the Impaler, and she ended up marrying a king of Peladon. Now she’s back, in a series of novels from Thebes Publishing.

The series kicks off with Erimem: The Last Pharoah, written by Erimem creator Iain McLaughlin and his frequent writing partner Claire Bartlett. It’s very clearly a “series pilot” with all the strengths and weaknesses that implies: a lot of what happens here is definitely done to introduce the characters that will be accompanying Erimem on her adventures in later books, and the circumstances that will allow them to have adventures. To their credit, McLaughlin and Bartlett work hard to wrong-foot the reader; exactly who is in place at the novel’s end is not who you’d expect at the beginning.

A time storm deposits an amnesiac Erimem in the London University Museum of History and Antiquity in 2015, dragged from (apparently) Peladon by the machinations of a sinister cult. But before she can get her bearings, she, along with Ibrahim Hadmani, a curator at said museum, and a few other people at the university, are swept through time again, to the era of ancient Rome. It falls on Erimem — who has some experience with this kind of thing, even if she doesn’t quite remember it — to keep this group of inexperienced time travellers alive.

I think the biggest pitfall for a Doctor Who spin-off is to be too like the parent series; like Bernice Summerfield, The Last Pharaoh distinguishes itself by upping the realism of time travel. There’s no translation circuit, no psychic paper: when Erimem and company are stranded in the past, they have the wrong money, the wrong clothes, the wrong language. There’s no know-it-all Doctor to sort things out; a lot of the plot is taken up with the logistics of getting by in 30 BCE. Though I don’t know if I’d want to read this all the time, I enjoyed it here, because the cast’s reactions feel realistic and plausible. Some cope better than others. My favourites of the new characters turned out to be Ibrahim, who seemed intelligent and adaptable, and Andy, the refreshingly practical café worker.

Evil cults, Roman legionnaires, mystical dreams, and future mysteries — this isn’t deep, but it is fun

On the other hand, the character of Erimem herself felt a little lacking. Though a passionate and forthright person, Erimem often keeps her true feelings locked inside. Near the end of the novel, a bit of an inner struggle for her emerges, but for the most of it, she’s a distant figure, an outsider to our other lead characters. Her inscrutability is only compounded by her amnesia: though the effects of her travels remain, this isn’t quite the Erimem who adventured with the Doctor and Peri all those years, because she can’t access those experiences. I hope a more elegant way is found around this in future books. On the other hand, I did really like the coda to the book; Erimem’s actions there made her pop as a character for the first time.

Aside from these highs and lows, The Last Pharoah is a pretty standard adventure narrative. You’ve got evil cults, Roman legionnaires, mystical dreams, and future mysteries. This isn’t deep, but it is fun. I look forward to seeing where it all goes. There are some Doctor Who spin-offs whose reason for existing I am forced to question, but Erimem had a good seven-year run in the series, and was a well-realised character with a lot of potential. Hopefully we see that realised in this new series.

Erimem: The Last Pharaoh (by Ian McLaughlin, Claire Bartlett) was released by Thebes Publishing in June 2015.