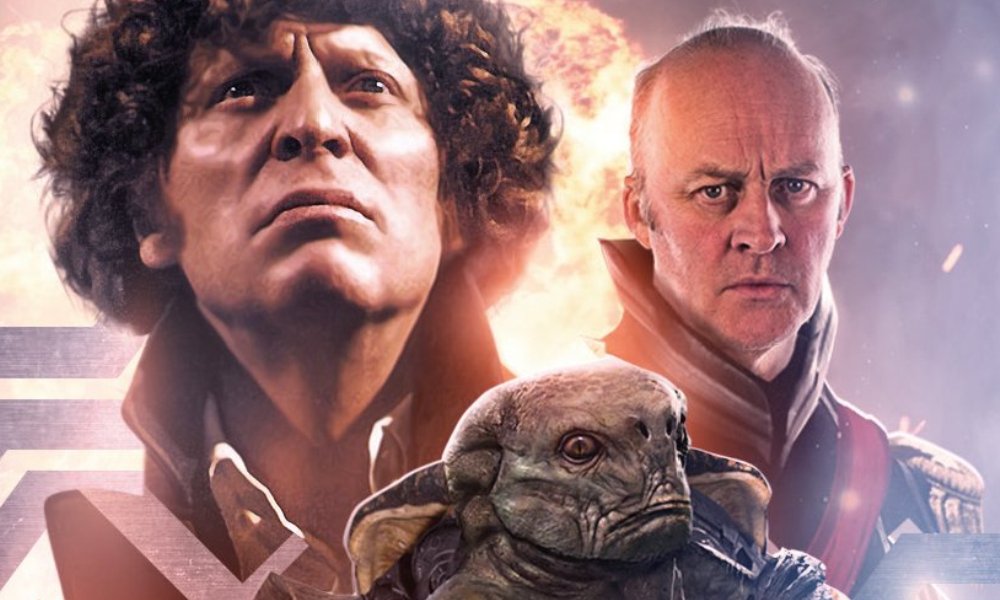 Big Finish Novel Adaption #5 is The Well-Mannered War, rounding off The Romance of Crime and The English Way of Death into a nice little trilogy — if only this was the kind of trilogy we were hearing in the Doctor Who main range! Like those other two stories, The Well-Mannered War is a John Dorney adaptation of a Gareth Roberts novel starring Tom Baker, Lalla Ward, and John Leeson, and like those stories, it sings. I don’t know if I could pick a favourite one, but The Well-Mannered War is perhaps the best candidate.

In this adventure, a very improbable occurrence causes the TARDIS to land near the very end of the universe, where a human colony and a Chelonian one are battling it out over an insignificant planet, only no shots have been fired for centuries. Of course, things are heating up now. The Well-Mannered War features a deliciously complicated plot, with wheels behind wheels behind wheels, yet it never becomes overcomplicated.

On the other hand, it also features tons of good jokes, the best of which have to be when K9 runs for president of the human colony. “Vote for K9, the logical choice!” Hearing K9 plot political strategy is utterly delightful; Roberts/Dorney hit just the right note with K9’s usual insufferability, and John Leeson is as fun to listen to as always. Also good: a tea lady in a war zone!

As always is the case in these Fourth Doctor Adventures, good material yields good performances. Not that Tom Baker ever really strikes a wrong note, but there’s so much more one can do with Gareth Roberts dialogue than, say, Nicholas Briggs. Tom’s Doctor is on fire here, skulking about with the usual band of rebels (who turns out to be just one guy) while Lalla Ward’s Romana does a lot of the heavy lifting plot-wise with a little jaunt into space. Plus: the return of Michael Troughton’s Menlove Stokes! Entertainment inevitably ensues. Indeed, there’s a lot of great casting in this story overall: Tim McInnerny, Hamish Clark, John Banks, and Elizabeth Rider all shine in particular.

He’s in the cast list, so I guess technically it’s not a spoiler, but the story also features the return of David Troughton as the Black Guardian, complete with a dead bird on his head! (Troughton, fact fans, played the Black Guardian back in 2009’s Key 2 Time trilogy.) You even get to hear him interact (briefly) with his brother Michael, though I find it hilarious that after all the setup for Stokes’s role in the Bernice Summerfield New Adventures we hear here, he barely ever appeared in them.

Doctor Who isn’t always this fun, but it really should be

I admit that I got chills as the Guardian’s role in the proceedings was revealed — the end of this story was a perfect capper to a strong story, and a strong set of stories. On the one hand I want it to be followed up on, but on the other hand I like the idea that we might be left hanging forever — after all, this is one cliffhanger that’s been unresolved since 1997 already! These three novel adaptations will be ones to relisten to again and again. Doctor Who isn’t always this fun, but it really should be.