Doctor Who: The Romance of Crime / The English Way of Death adaptations review 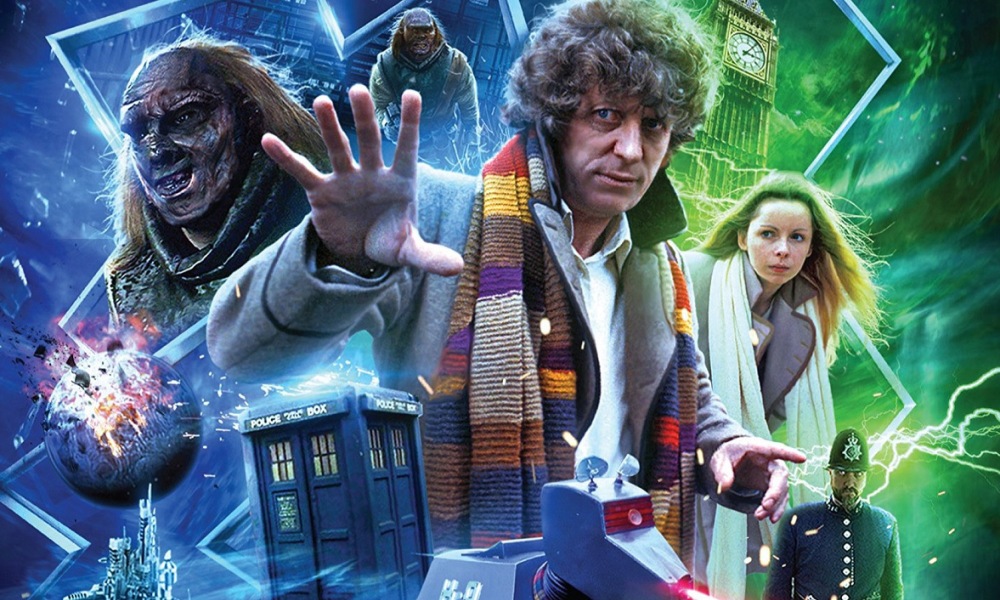 Off the success of 2012’s Love and War, Big Finish has commissioned a whole mess of further full-cast audios adapted from classic Doctor Who novels. The first of these to come my way are The Romance of Crime and The English Way of Death, adapted by John Dorney from Missing Adventures by Gareth Roberts, who’s since written a number of episodes of the revived TV series. Both novels star the Season 17 TARDIS team of the Fourth Doctor, the Second Romana, and K9 Mark II, and they are collected together in yet another of the fancy boxes that Big Finish has become enamoured of since The Light at the End.

Lalla Ward’s Romana is a particular favourite companion of mine, and we haven’t heard her in action with Tom Baker at Big Finish before, so I was really looking forward to these stories. They do not disappoint. Though I understand that they actually recorded separately, Tom and Lalla bounce off each other like 1979 never ended. This is some of the best dialogue both of them have ever gotten, individually and together. And, of course, I get an inner tingle of joy every time John Leeson speaks a line in the persona of K9, and Roberts/Dorney give him some great lines, too.

The Romance of Crime kicks things off with a visit to a prison asteroid in the Uva Beta Uva system. At first its residents react in surprisingly blasé fashion, but after the assistant of resident artist Menlove Stokes is murdered, it becomes clear something more is going one. Roberts weaves a complicated plot here — there’s not just a murder, there’s also a mysterious mask, Ogrons, a police detective whose family left him, and a massacred survey outpost that all end up factoring in. Though the script is both fun and funny, it also maintains an essential seriousness that counterbalances that well. This is the four-part Doctor Who format used to its utmost advantage, with lots of turns, and great ideas everywhere.

The Romance of Crime is the four-part format used to its utmost advantage, with great ideas everywhere

None of the characters in The Romance of Crime are particularly anything to write home about, being very much Doctor Who types — but, it must be admitted, deliberately so. I don’t think you’ll be amazed by character development, but the actors manage to pitch their characters exactly right, playing the stereotypes (criminal thugs, beleaguered administrator, maniacal villainess) without being nothing but stereotypes. The definite highlight was Michael Troughton’s wonderfully weasely and self-deluded artist Menlove Stokes. I was dimly aware of the character before — he turns up in a couple Bernice Summerfield New Adventures that I’ve read, actually — but here he’s utterly delightful, hitting just the right humorous note. You also enjoy his scenes even though he never has anything good to say! On the other hand, I’m not sure how well the joke of Graham Seed’s Pyrepoint comes across. He’s supposed to seem like a one-note hardboiled detective wandering into a Doctor Who story and not getting how it works, but it’s basically a one-note joke.

The second release contained herein is The English Way of Death, where the Doctor overrides the randomiser to return some library books in England of 1930. The result of this is, of course, P.G. Wodehouse pastiche left, right, and centre, and, well, of course I love that. The story gets off to a rocky start, actually — it took a while for me to figure out how all the various strands went together — and there’s the world dullest blob of exposition in Part Three, but on the most part, this story is hugely enjoyable. Readers may recall that I chastised Moonflesh for its terrible stereotypes of characters: “You can fill a story with stereotypes if they are at least funny, but there are no laughs here, just cardboard thin characters”. Well, Roberts and Dorney show how to do this kind of thing correctly; I loved everyone here, from the biscuit-loving Percival Closed to the gung-ho mystery writer Felicia Chater, from the raygun-wielding Harriet to the blustering Colonel Radlett (who falls in love with Romana at first sight!). It’s particularly striking that Tim Bentinck’s Radlett is essentially the same character as he played in Moonflesh, yet he was dull as a post there and sparkles here. The way all the character-lines intersect and resolve at the end is perfect too. Like The Romance of Crime, this story is filled with fun, big, interesting ideas.

The English Way of Death is filled with fun, big, interesting ideas

Sound design and music for the two stories is handled by Jamie Robertson and Howard Carter, and both are on strong form. Robertson does some of his best work for Big Finish’s Fourth Doctor Adventures, and his score for The English Way of Death hits the Dudley Simpson vibe perfectly, while mixing in the “Begin the Big Adventure” theme he’s been using for Tom Baker stories since Destination: Nerva. Howard Carter, too, excels musically here, and the sound on both stories is up to the usual Big Finish standard, the era in question being recreated perfectly.

A word on the packaging here: if you purchase on download, there’s no reason not to go for the “Limited Special Edition”, as it works out to slightly cheaper than buying each story on download individually, and you get the bonus interview disc. I can’t speak to the physical version, though, where you pay a whopping £15 extra over buying the stories individually, for the dubious value of a nice box, some photos of the cast, and the interview disc. I don’t mind getting the interviews for free, but these are some pretty dismal interviews, to be honest: it’s mostly just the usual actor blather. John Dorney pops up to give a disappointingly small amount of insight into the adaptation process. It must be said, though, that Tom Baker’s enthusiasm for recording these things is utterly infectious.

I know it’s undergone a re-evaluation in fandom these past couple years, but I remain pretty cool on Season 17 of Doctor Who. Now, City of Death is fabulous, and Nightmare of Eden good fun, but I find Destiny of the Daleks, The Creature from the Pit, and The Horns of Nimon difficult to enjoy. It’s not that I don’t like a more whimsical approach… it’s that this particular whimsy is, on the whole, badly done. But Gareth Roberts and John Dorney show what Season 17 could have been like if every episode had been of high calibre — these may be novel adaptations, but they feel like adaptations of scripts that never made it to screen, but would have dominated the season if they had been.

The Romance of Crime and The English Way of Death (by Gareth Roberts, John Dorney; starring Tom Baker, Lalla Ward, John Leeson) were released by Big Finish Productions in January 2015.