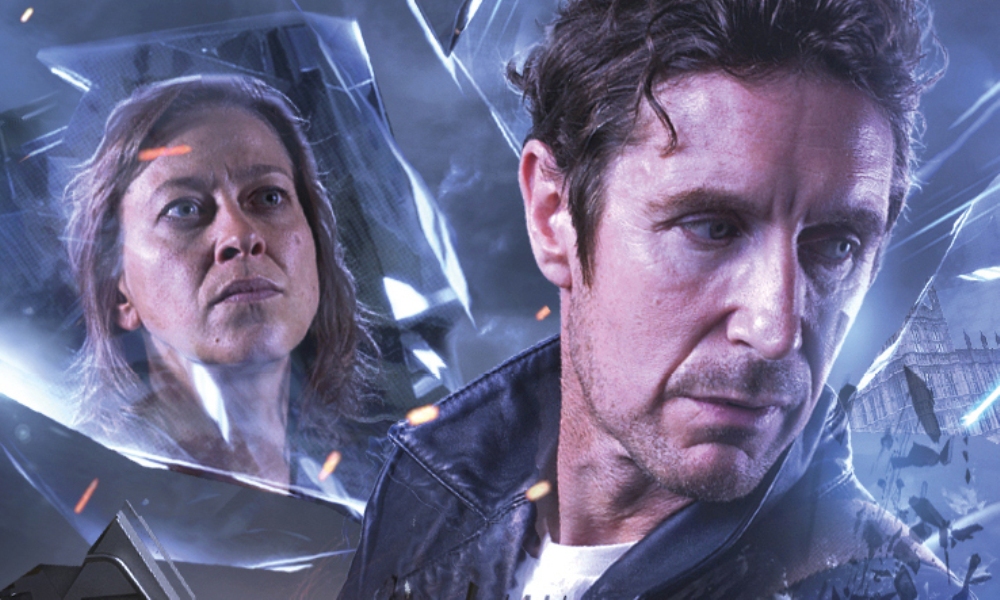 Back in 2011, the Doctor encountered the Daleks for the first time in a long while, and they managed to take from him two of his friends, not to mention his great-grandson, sending him into a spiral of depression. Four years later, we come to the end of a journey that’s taken the Eighth Doctor across time and space, from the battlefields of World War I to the end of the universe, from a world where the Daleks and the Time Lords wiped each other out to twentieth-century London. Dark Eyes 4 gives us the end of a story that’s not taken in just Lucie Miller, To the Death, and three previous Dark Eyes sets, but myriad corners of Big Finish continuity: the further adventures of the new Master from UNIT: Dominion, the return of the Dalek Time Controller from Patient Zero, the return of a medtech from Robophobia, the inclusion of a Viyran time virus from Charlotte Pollard, and the war with the Eminence from The Seeds of War and Destroy the Infinite.

Dark Eyes 4, then, has a lot riding on it, not the least because while the original Dark Eyes stood alone, its three successor stories come together to form one big story that draws elements out of the original. How good Dark Eyes 4 might be is not just a matter of the quality of the four stories contained within, but how well it pays off everything we might expect it to from the umpteen stories it follows on from. The threads are diverse at this point: the Doctor’s desperation following the death of Lucie Miller, the life of Molly O’Sullivan, the plots of the reborn Master, the beginning and the end of the Eminence, Liv Chenka’s new lease of life, the machinations of the Dalek Time Controller, and everyone’s favourite, the retrogenitor particles.

Seemingly oddly, then, Dark Eyes 4 begins with a lighter story: Liv trying to cheer herself up in interwar London while the Doctor looks for clues as to what might have happened to Molly O’Sullivan. John Dorney’s A Life in the Day is a sweet little story, putting an interesting spin on a familiar Doctor Who trope. No Molly O’Sullivan, but it does bring back her erstwhile employer Kitty Donaldson (though both the Doctor and Dorney seem to have forgotten that Kitty herself was a VAD). The highlight of the story is definitely the tender relationship that develops between Liv and Martin, Kitty’s invalided brother, played delightfully by Barnaby Kay. This one has some laughs, and a great little ending.

There’s some great stuff in Dark Eyes, but on the whole it doesn’t add up to much

A Life in the Day feels very separate from the three stories that follow, which continue from the one into the other pretty directly: The Monster of Montmartre by Matt Fitton, Master of the Daleks by John Dorney, and Eye of Darkness by Matt Fitton. These three stories in particular have the mammoth task of pulling together everything we’ve heard throughout Dark Eyes, but in the end, I don’t think they were quite up to the task. Let’s revive a review format I used back in the day for Dark Eyes 2 and go through this thing point by point!

The original Dark Eyes was all about the Doctor rediscovering hope — what started an assignment seemingly foisted on him by Straxus changed into something more, till he was having actually having fun with Molly. Of course, this was tempered by a new cynicism: Molly was secretly an anti-Dalek weapon, and the Doctor couldn’t bring himself to believe the Daleks could ever turn good. Dark Eyes 2 took the Doctor into some darker spaces, as in his desperation he even tried to use the Daleks and the Eminence as weapons against one another. But I think this character focus was lost in Dark Eyes 3, and it’s all but gone in Dark Eyes 4. The Doctor just feels like his usual, fun-loving, adventurous self in A Life in the Day and The Monster of Montmartre. Which is good in its own way, but feels like we’ve lost what the original Dark Eyes was all about. Like, the retrogenitor particles are still around, but those are just trappings: the core of this story was the Doctor’s anguish, and that’s forgotten. Master of the Daleks and The Eye of Darkness are even more egregious on this score. In the former, the Doctor is unconscious and/or amnesiac for most of it, while in the latter, he’s just a bystander in gigantic events, reacting, but never really doing anything meaningful. The set ends with him making a resolution he will obviously hold until the end of his life (see The Night of the Doctor), but we don’t really see the process by which he arrived at this; he just states it all of a sudden. What caused him to change the position he held in Dark Eyes 2 and 3? While the first Dark Eyes especially made good use of McGann, this one feels like it wastes him.

The Doctor just feels like his usual self, which is good in its own way, but feels like we’ve lost what the original Dark Eyes was all about

If “hope” was the heart of the original Dark Eyes, then Molly was its personification. It’s disappointing, then, that Molly is such a non-entity in this story and its predecessor. I know she’s not in the cast list, but I’ll give you the minor spoiler that she does impact the proceedings through an admittedly clever way. I understand this was dictated by out-of-narrative concerns, but it still has a negative impact on the final product. Molly spent most of Dark Eyes 3 under the Master’s control; she’s only in about half of Dark Eyes 4, and in a way that I didn’t find particularly fulfilling. So much of the first box was about her, but here she feels lost in the shuffle. And, as always, there’s too much technobabble: retrogenitor particles are mentioned, and there’s some similar nonsense to justify her continued plot importance. It fails to convince, and I don’t think the reactivation of her “dark eyes” in Dark Eyes 2 was ever adequately explained.

With this release, Nicola Walker’s Liv Chenka continues her ascent into the pantheon of great companions. Liv received a new lease of life in Dark Eyes 3, but that doesn’t magically turn her into a happy person. One of the real strengths of A Life in the Day especially is her struggle to live happily: how can you do that when all you’ve known is despair for so long? Walker handles all this beautifully, and she also gets to flirt with French crime bosses and engage in a battle of wits with the Master. She’s a fantastic, lived in, real character, and I was pleased as punch to see that her association with the Eighth Doctor will continue beyond Dark Eyes 4.

Truth be told, I never warmed to the Eminence. It plays less of a role in Dark Eyes 4 than in the previous parts, but it’s still not interesting. We learn its origin here, but its origin is so hackneyed that we’d have better off leaving it a mystery, I think.

I kept on expecting the Master’s actions in the three later Dark Eyes volumes to come together in some way. In Dark Eyes 2 he’s trying to use the Eminence on contemporary Earth, in Dark Eyes 3 he’s trying to use them during the Eminence War, but in Dark Eyes 4, he’s teaming up with the Daleks for some reason. Maybe it was my own expectations leading me astray, but I was surprised that each Dark Eyes story was its own plan, instead of one big “Master plan”. That said, Alex Macqueen continues to amaze and delight; especially in Master of the Daleks, where he and Liv keep trying to outsmart each other, he really shines with his charm and flippancy. Though I hope Big Finish give him a rest in the Eighth Doctor stories for a little bit, I hope we hear tons more from him in the future. (There’s definitely space for more Seventh Doctor encounters.)

Alex Macqueen continues to amaze and delight; he really shines with his charm and flippancy

The Daleks and their Time Controller

Well, we find out the origins of the Dalek Time Controller. I bet you were burning to know that. Again, the Dalek plans across the various Dark Eyes boxes don’t seem to go together. In the original, they have a sneaky plan that spans all time; in Dark Eyes 2 they’re almost incidental, just your typical empire-builders; here they have a crazy plan, but not much is made of it. Just as I hope the Master is given a rest in the Eighth Doctor stories for while, I hope the same is true of the Daleks. Though they’re always fun, too much of anything gets dull, and we’ve definitely had too much Daleks of late.

Well, they’re in this, I guess. God knows why. One senses that John Dorney is similarly perplexed, but he does as good a job as one could imagine. Dan Starkey is as great as he always is, at least.

The Eye of Orion

Yeah, what’s the point of revisiting a setting where nothing happens on audio? You can’t even see the Welsh countryside!

In the 16-part Dark Eyes saga, I’d have to say that it’s volumes 3 and 4 (episodes 9-16) that disappointed the most. Not that Dark Eyes 4 is without its highlights (The Monster of Montmartre is actually pretty fun, if a little too linear because of its runtime), but things didn’t tie up in a way that I found satisfactory. This partially might be because the whole story was made up as it went along; hopefully what comes next (the quite subtly titled Doom Coalition) will benefit from solid advanced planning. But it’s also due to the format (or at least the way Big Finish write to the format). There’s not many guest characters (because there’s so many main ones), and the 45-minute stories don’t really develop their guest cast, meaning that with a few exceptions, the Doctor and his companions move through a world of unmemorable ciphers. Hopefully the next set of sets can work this problem out too. There’s some great stuff in Dark Eyes, but on the whole it doesn’t add up to much, and Dark Eyes 4 suffers from that problem the most of all of them.