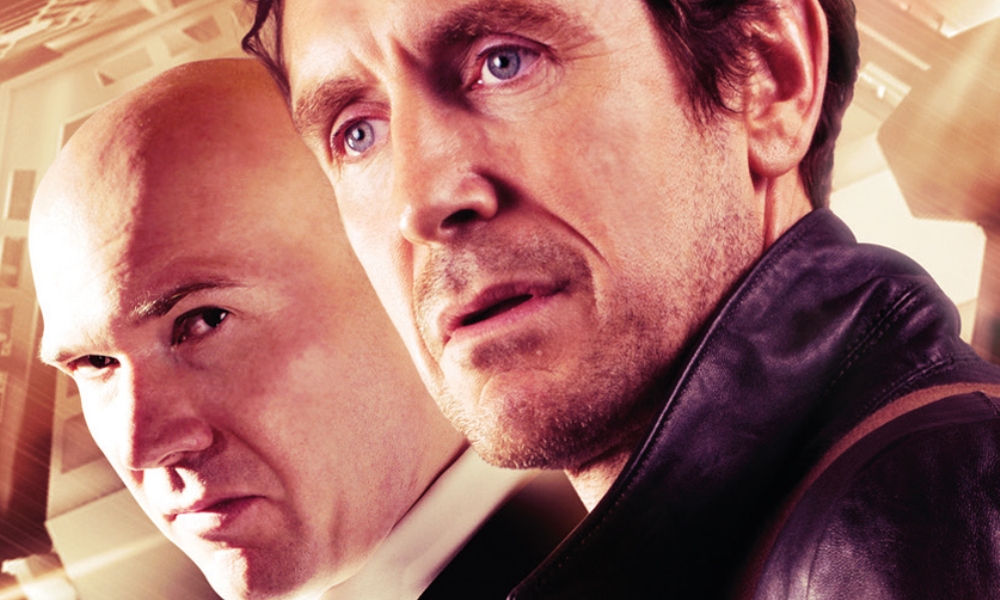 Dark Eyes and Dark Eyes 2, though not without their flaws, were pretty well received here at Unreality Towers. Splashy, big stories, they propelled the Eighth Doctor further than he’d ever gone before, to the edges of the Time War and his own desperation. Though they took very different approaches — Dark Eyes was very much one big story and almost a clean break with the past, while Dark Eyes 2 was four smaller stories that referenced numerous previous Big Finish releases — they had a common theme of the Doctor trying to figure out who he was in a desperate time.

Dark Eyes 3 pushes this further… in intent, at least. Having come up against the Eminence in Dark Eyes 2, the Doctor has decided to aggressively fight back against them. All the stories in Dark Eyes 3 take place during and around humanity’s war with the Eminence (we previously heard the war in Destroy the Infinite and its aftermath in The Seeds of War), with the Doctor doing what he can to stymie the Eminence and help humanity get through safely. Meanwhile, the Master is pushing his own game, trying to twist the Eminence to his own ends with the help of a brainwashed Sally Armstrong.

It’s an idea with potential: the Eighth Doctor, who’d rejected the more proactive strategies of his predecessor, deciding to really go for it

It’s an idea with potential, of course: the Eighth Doctor, who’d previously rejected the more proactive strategies of his predecessor in stories like The Resurrection of Mars, deciding to really go for it, but Dark Eyes 3 doesn’t quite pull it off, and what results is a series of stories that feels like less than the sum of its parts. There are good individual bits here, but they don’t really add up to anything.

First off is Matt Fitton’s The Death of Hope. It’s a cool idea for an opening: the Doctor is summoned by CIA Co-ordinator Narvin (late of Gallifrey) to witness the Master’s latest adventure, and then we get to watch the Master at work. It’s almost like Master Who. Unfortunately, the story has two main faults. The first is that there’s either too much of the Doctor, or too little. He and Narvin just periodically comment on the action, appearing often enough to annoy, but not enough to contribute anything of substance. If the Doctor hadn’t have been in this at all, that would have been fine, and if he’d done something important, that would have worked, too: but as it is, he just makes snarky comments and contributes nothing. Second is that the plot is just not complicated enough. The Master turns up, he has a plan, the plan works out. It would have been cool to follow the Master through a real story, see him improvising with all his brilliance, but this is too linear to excite.

It would have been cool to follow the Master through a real story, see him improvising with all his brilliance, but this is too linear

Which isn’t to say that there isn’t a lot to like about the story, much of it based around Alex Macqueen. The Master is just clearly having so much fun here, down to his choice of attire (please see the cover to Disc One). Similarly, the influence he exerts over Molly O’Sullivan — his new “companion”! — is chilling. It’s in these parts of the stories where the stakes really come through.

Next up is The Reviled by Matt Fitton. This is by far the weakest story of Dark Eyes 3, and perhaps Dark Eyes as a whole. Here, the Doctor and Liv Chenka struggle to save a human colony in the way of the Eminence, but things are complicated by the fact that the humans colonised an inhabited planet, and those original inhabitants see the coming of the Eminence as an opportunity. The story takes what could have been a complicated situation and removes all nuance; we’re clearly meant to sympathise with the humans, while the natives are portrayed as irrational, immoral schemers. Excuse me, but who was the invading power here? It doesn’t help that all the guest characters are just types: plucky rebels (one’s a man and another’s a woman so there can be some “flirting”) and intransigent administrators and aliens with funny voices. You’ve heard it all before. It’s a pretty typical problem throughout the Dark Eyes sets, which have so many main characters (the Doctor, Molly, Liv, the Master, Sally, Straxus, and later Narvin) that there’s scarcely any room for side characters to ever be interesting, but rarely has it been as large as it is here. I didn’t get a single crap about what happened to any of these people, and thus I didn’t care about this story either.

Nicola Walker hits it out of the park; surely Liv is the realest companion the Doctor has ever had

Third, Matt Fitton pens Masterplan, which is the best story on the set. It should be awesome, but ends up just being pretty okay. The main story is that the Doctor and the Master get in a sticky situation and have to work closely to get out. This could have been great, giving us real insight into their relationship and animosity, but for once, Macqueen’s glibness in the part works against him — it’s hard to feel like we’re ever seeing the real him — and Paul McGann doesn’t really get into it, either. There’s some good bits, but nowhere near as many as there ought to have been. The best part of the story is actually Liv Chenka investigating the origins of the Eminence. Though I’m not convinced that Big Finish’s least interesting villains needed an origin, what we get is a Liv Chenka put through the wringer, as Markus Shriver puts her into a situation where either she must die… or poor Sally Armstrong will. As always, Nicola Walker hits it out of the park. I love all those plucky Doctor Who girls, but surely Liv is the realest companion the Doctor has ever had.

Finally, Big Finish newcomer Matt Fitton wraps the whole thing up with Rule of the Eminence, which answers the mystery set up way back in The Seeds of War: why did the Eminence leave? Unfortunately, it’s one of the Big Finish stories that’s a lot of noise, but not enough character. Again, it has its moments — mostly involving Liv Chenka and/or the Master — but it feels derivative of other Master-rules-the-world stories like Last of the Time Lords and The Glorious Dead, and… well, if I never hear the word “retrogenitor particles” again, it won’t be soon enough. Particles, particles, particles! That’s what the largely nonsensical climax here is all about.

Somehow, then, the story of the Doctor finally fighting back turns out to not be all that interesting. Paul McGann isn’t really given much to work with here; whereas in the original Dark Eyes, we really felt his pain, here he’s just kind of there, reacting to the plot a lot. Other than the Master, the only character who really pops is Liv. Although I did quite like Natalie Burt’s turn as the villainous Sally Armstrong. Ruth Bradley might delight as Molly, except she’s disappointingly barely in this set, just a handful of scenes in a couple episodes. After two strong — albeit quite different — box sets to begin with, it’s a shame to hear Dark Eyes 3 stumble, but I hope that Volume 4 can regain the momentum for the finish.