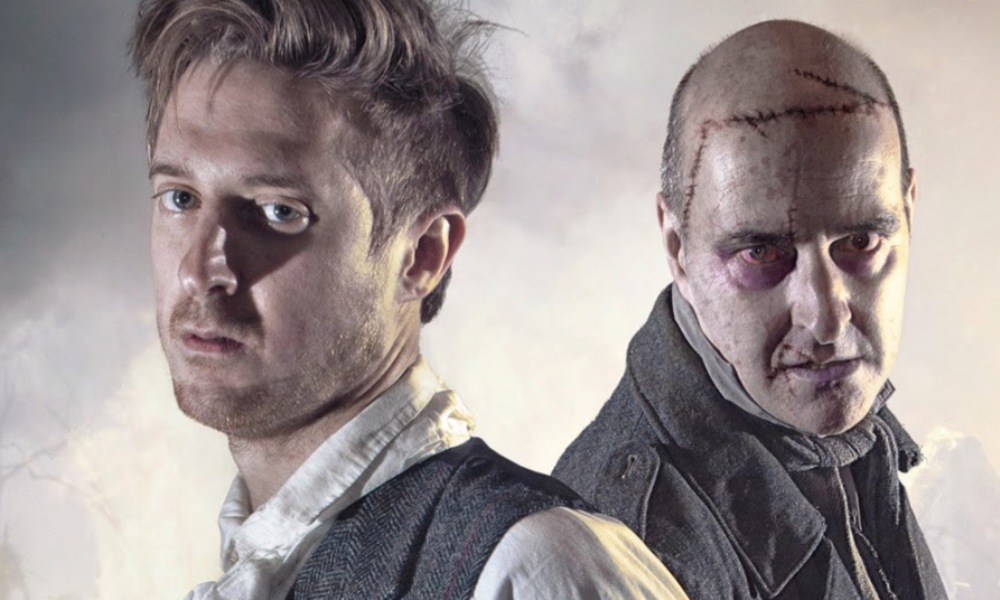 If there’s a novel I know a lot about it’s H.G. Wells’s The War of the Worlds. But if there’s another novel I know a lot about, it’s Mary Shelley’s Frankenstein; or, The Modern Prometheus — just see my author blurb on this very site where I say I study “the depiction of science and scientists in nineteenth-century Britain”. You don’t get much more on topic than Frankenstein!

So it was with a mix of excitement and apprehension that I came to the most recent Big Finish Classics release, Mary Shelley’s Frankenstein: The Modern Prometheus. Like all Big Finish Classics, Jonathan Barnes’s story makes claim of being a faithful adaptation. And in some respects it is, very much so: Barnes keeps the frame narrative of the original intact, with Captain Walton (played by Alex Jordan) on his mission of polar exploration coming across the desperate Frankenstein in the Arctic wastes, who tells him the story of how he came to be there… This frame story is used consistently and to good effect throughout the story.

Barnes removes a lot of the story’s moral complexity

Unfortunately, I think the adaptation falls down almost immediately upon entering the flashback. Victor Frankenstein in the hands of Barnes’s writing and his monotone performance by Arthur Darvill (Doctor Who’s Rory Williams) is a completely flat character, a man who is a monster in almost every regard. Barnes’s script consistently and constantly chucks in reasons to dislike him: his Frankenstein is emotionally distant from day one, not loving his fiancée Elizabeth, and cheating on her with his own housemaid Justine. I’m not sure what good it does to the story of Frankenstein to make him into such a jerk right from the off.

Then, as the story unfolds, things get worse. Frankenstein’s real sin in the novel is in just daring to take the power of creation into his own hands — but Barnes seems to think what was quite horrific in 1818 won’t pass muster in 2014. Based on my experience teaching this novel to undergraduates, he’s right, but I don’t think much of his solution: Frankenstein becomes a murderer to acquire the parts he needs for his creation. This removes a lot of the story’s moral complexity — of course creating the creature is a horrific act if you had to kill someone to do it! (Meanwhile, Frankenstein is sleeping with a barmaid for some reason.)

Then when the creature kills Frankenstein’s brother and Justine is blamed, we’re treated to a double set of off-putting scenes: Frankenstein’s cruel dismissal of Justine — in the novel, her death is of great consequence to him — and a weird bit where Stephen Fewell (Bernice Summerfield’s Jason Kane) plays a lecherous judge who gets all hot and bothered at Justine’s appearance. I could not tell you what purpose this latter aspect is intended to introduce.

Similarly, when the creature tells his tale of forest woe, what is a moving scene of misunderstanding in the novel becomes another scene of dark intent, when the family plots to put the creature in a freak show! Barnes’s transformation of everyone in the novel into one-dimensional selfish people renders the story very flat — it’s just terrible event after terrible event after terrible event happening to a Victor Frankenstein who never reacts in any real way, whose only admissions of guilt or regret are clearly pretences to assuage his worried father and fiancée. It’s not an unworkable idea that Frankenstein himself is the real monster, but he’s so uncomplicated a monster here as to be completely uninteresting — three discs of him doing terrible thing after terrible thing while no-one else seems to recognise this becomes dull very quickly.

I think Nicholas Briggs does a passable job as the creature himself, but he too is limited by his character’s lack of complexity. My favourite part of the novel is the sequence told from the creature’s point of view, where he watches the family in the woods and learns what it means to be a human being — and then starts to despair over it. It’s a fascinating sequence, but here it’s severely curtailed, and as I said above, the family is turned into despicable people. This really undercuts some of the central themes of the book, but also leaves the creature without much of interest driving him. There are also a few unnecessarily graphic murders committed by the creature in pretty over-the-top fashion which just made me roll my eyes.

This isn’t to say that Big Finish’s Frankenstein is some kind of monstrous failure; if nothing else, the usual Big Finish production values make this well worth listening to. Neil Gardner’s sound design brings so much to life, from the desperate coldness of the North Pole to the unholy creation of the creature, from the wastelands of Ireland to the panic-filled streets of Ingolstadt. James Dunlop’s score, too, is a worthy accompaniment — he’s one of the better Big Finish composers, and I was glad that his work merited a whole 50 minutes on one of the bonus discs of the special edition. There’s also the usual Big Finish stable of accomplished actors. Astoundingly, Colin Baker seems to have missed this one out, but his long-time nemesis Terry Molloy (Davros) plays a couple small roles, and I especially appreciated the appearance of Geoffrey Beevers as Frankenstein’s long suffering father, able to apply his velvety tones to something other than the villainy of the Master.

It’s interesting — Frankenstein is my third Big Finish Classic. Of the three I’ve heard, I liked Treasure Island the best… the one where I haven’t read the source material. Both of the ones where I have read the source material (the other being The Picture of Dorian Gray), I find myself finding the adaptations disappointing, not because they make changes per se, but because they make changes that remove the complexity of the source material and make it more straightforward. Why adapt something and remove layers? A good adaptation should (even if it has to cut plot elements for timing) add something to a story, not diminish it. It should make you see something new in the original that was nascent before. Unfortunately, Frankenstein fails to do this, turning Mary Shelley’s twisted masterpiece into a generic story of straightforward horror.