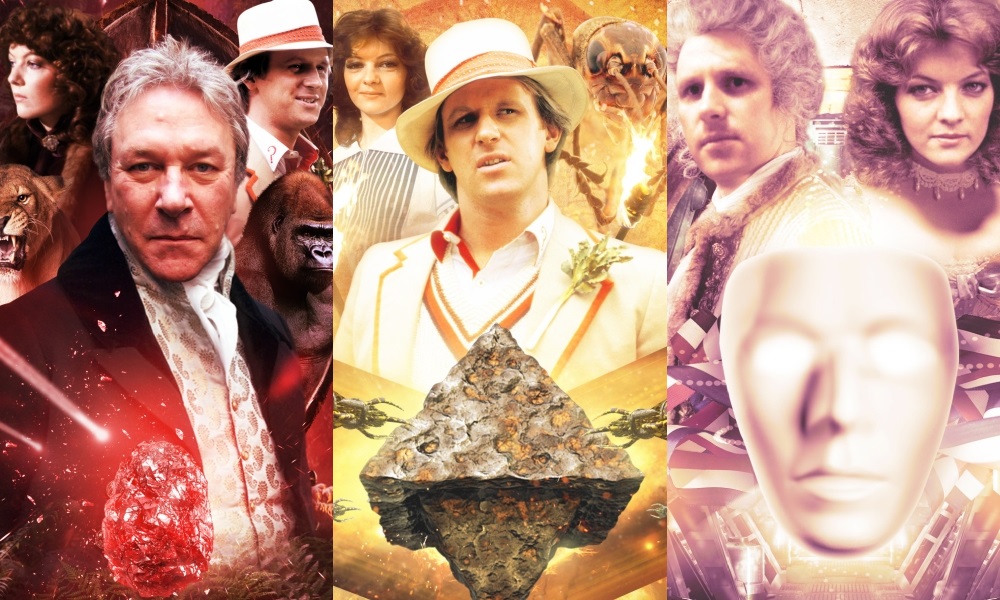 Faithful readers will know that I’ve largely been struggling with the main range of Big Finish Doctor Who audio dramas for the last year-plus. Since the successes of the Black and White TARDISes trilogy, things have been extremely mixed: the Drashani trilogy was a flawed experiment, 1001 Nights was pretty good, the Mel trilogy had the excellent The Wrong Doctors but also the dreadful The Seeds of War, the most recent Nyssa trilogy had the excellent The Lady of Mercia but also the dreadful Eldrad Must Die!, and the Klein/Will trilogy was a misfire on almost every conceivable level. It must be admitted that the 1963 trilogy (and, to a lesser extent, Afterlife) was a return to form, but looking ahead to 2014, I decided to skip the Flip trilogy, but gave the newest Nyssa trilogy a chance.

The trilogy consists of Mark Morris’s Moonflesh, Gordon Rennie and Emma Beeby’s Tomb Ship, and Stephen Cole’s Masquerade. Listening to these stories, I found them all extremely frustrating. Not because they’re bad — if they were bad maybe I could have been entertained — but because they’re almost uniformly unambitious and dull. Like the Fourth Doctor Adventures, these stories are Doctor–Who-by-the-numbers, though I suppose their lack of continuity elements perhaps prove that it’s not necessarily gratuitous continuity that makes for boring Doctor Who, it’s a total lack of ambition that makes for boring Doctor Who.

Moonflesh leads us off with the Doctor and Nyssa landing in 1911, where a variety of folks are gathered for a big game hunt on the estate of an international explorer. Every single one of these characters is ripped out of a book of stereotypes: there’s a brash big game hunter, his doting daughter, a sneering factory owner, his kinder son, a trousers-wearing suffragette, and a wise Native American. In some ways it reminds me of the excellent P.G. Wodehouse story Something to Worry About, but with a key difference… nothing about this is humorous. Or even entertaining. These characters all argue with each other all the time, and it is just agonisingly dull. You can fill a story with stereotypes if they are at least funny stereotypes (though I should point out that much of Wodehouse’s humour comes from making the woman the brash big game hunter), but there are no laughs here, just cardboard thin characters.

Moonflesh reminds me of the P.G. Wodehouse’s Something to Worry About, but with a key difference: nothing about this is humorous. Or even entertaining

Things go from bad to worse when an alien turns up claiming to be an unjustly pursued fugitive… it won’t be a spoiler to tell you that that he’s lying, but the only person unsurprised by this twist will be you, the listener. Things go from worse to even worse when Sarah Sutton has to say “They’re on a journey… a journey of the mind” and the Doctor and Silver Crow go on a deathly dull and completely tension-less vision quest. Has any audio drama ever made a journey in a surreal landscape interesting? Even if so, this one doesn’t.

If there’s a highlight to this trilogy, it’s Tomb Ship, in that it actually has some interesting concepts floating around in it: a giant Egyptian-esque tomb in space and a mother who raises sons solely to use them as tools in her space salvage operation. The Doctor and Nyssa get stuck in the middle of all of this, and what emerges is decent enough — Eve Karpf is memorable and enjoyable as the evil mother, and that’s more than you can say for any one of the guest characters in Moonflesh. There’s some enjoyable stuff, but the problem is that it gets a bit monotonous. In what is the opposite of the typical Big Finish Doctor Who problem, this would be a good two-parter, I think, but it’s just monotonous at four: trap, escape, trap, escape. The level of tension never really changes, the story has no peaks or troughs of energy, it just keeps doing the same thing again and again until it suddenly ends. By no means terrible, but I found it mildly disappointing.

The trilogy is rounded out with Masquerade. The Doctor and Nyssa and their new companion (more on that later) land in 1770, where the mysterious Steamroller Man is terrorising the denizens of a French country estate. Like the other stories in this trilogy, nothing is actively bad… it’s just dull. There’s a lot of running around, but the stakes are poorly defined; the Steamroller Man seems scary at first but then there are lots of scenes where people seem to be standing there talking while he approaches. Then the explanations start coming in, and with each new revelation things become less clear until I had absolutely no idea why any character could have conceivably made any choice (seriously, if you can explain the villains’ actual plan, please leave a comment because I have heard this story twice and do not get it), and there’s just so much technobabble nonsense that it sucks the drama right out. Did you know that two instances of nonhuman DNA cannot travel through the same dimensional interface simultaneously? Disastrous. Like Moonflesh, this story too is largely filled with dull characters, but unlike Moonflesh, you don’t even have their stereotypes to tell them apart.

The Doctor is pretty much at his most generic here, and never has the character of Nyssa been more squandered, spending all three stories alternately being in peril or doing nothing interesting at all. Moonflesh even commits the cardinal sin of Nyssa: having her complain about the TARDIS’s aimless wanderings. I cannot stand when Big Finish does this. Even leaving aside the fact that Nyssa is a scientist and naturally curious, her entire civilisation was destroyed — she has nowhere better to go. It’s a waste of one of my favourite companion characters, made even worse by the fact that, bizarrely, most of the extras for Tomb Ship are about what a great character Nyssa is. I cannot imagine why these extras were attached to a story that completely fails to reflect their content.

There’s a lot of running around in Masquerade, but the stakes are poorly defined

It’s a minor spoiler, but there is a unifying element to the stories beyond the leads being the Fifth Doctor and Nyssa: they are joined by a new companion. This could potentially be interesting — the companion is played by one of my favourite performers in the Big Finish stable — but like most things in this set, it is completely uninteresting. The character is just one of many guests in the first story, doesn’t show up until Part Four of the second, spends the first half of the third story under a form of vague and dull mind control, and is written out at the end of the trilogy. They literally have no impact on the Doctor/Nyssa dynamic, and I cannot even imagine a reason one would write in a new companion if this is all one is going to do with them. I challenge anyone involved to give me a reason for their inclusion, because I cannot think of a single one.

2013-14 has been a rough patch for Big Finish’s Doctor Who main range. With so many of the exciting event stories appearing outside it — and more importantly so many of the good stories — it’s hard to imagine that I’m going to be coming back month after month for much longer.